In early December 2019, the Maplewood Jewish Center gifted devoted congregant Jeffrey Kingsley with an accessible van. Diagnosed with ALS just over six years ago, Kingsley’s mobility had become increasingly diminished to the point where congregants volunteered to carry him in and out of the car, and the synagogue purchased a Hoyer lift for his home to assist him in getting from his bed to his wheelchair.

On Dec. 17, a few weeks after receiving the van, Kingsley died of complications from ALS. He was 65.

Family, friends, and community leaders described Kingsley as “the face” of the Maplewood Jewish Center, an Orthodox congregation where he has been a member since 2005, the person who wove the community together with a knack for being able to talk to anyone regardless of age, politics, or gender. All of the usual barriers dissolved in Jeff’s hands.

“It’s amazing how many people he knew and touched through work and shul and just in general,” said Jacob Sturm, a friend and fellow synagogue member. “He may be the most connected person I know.”

Yiddishkeit was a priority for Kingsley, but his involvement with Judaism was difficult to classify, according to friends. He was not particularly religious, but he kept a strictly kosher home and spearheaded the 2007 effort at Maplewood Jewish Center to install an eruv in town.

“He just loved everything about being Jewish,” said Sturm. “It was a huge part of his life.”

Kingsley spoke Yiddish and Ladino fluently, although he did not grow up in a chasidic or Sephardic home. He read Yiddish newspapers whenever possible and loved listening to Yiddish and Hebrew music.

His death is “a big, big loss,” said Rabbi Sholom Bogomilsky, spiritual leader of the Maplewood Jewish Center, who often spoke Yiddish with Kingsley. “Jeff was a guy with a big heart.”

Kingsley was instrumental in having an eruv installed in Maplewood in 2007. “It started as a little pipe dream, and he
really got it done,” said Bogomilsky’s wife, Frumie. In addition to taking on all the different tasks involved, include fund-raising, he met regularly with an outside rabbi to check the eruv long after the project was finished.

According to Sholom Bogomilsky, there was never a project at the synagogue that he was not involved with. “The question was how much he would be involved, not if he would,” he said.

Famous among friends for his culinary passion, Kingsley was known to travel in search of the perfect ingredients for traditional favorites like chicken soup, noodle kugel, and kasha varnishkas. When his illness prevented him from doing the cooking, he commandeered the kitchen from his wheelchair, offering instructions as others wielded the knives and stirred the pots. 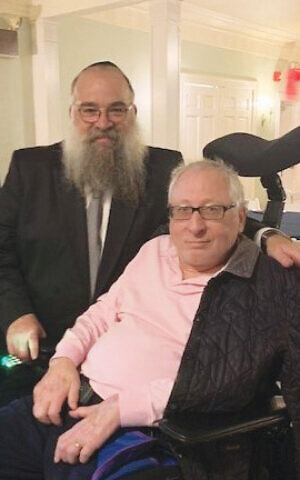 One of his first activities after receiving the accessible van was grocery shopping with friends, something he hadn’t done in well over a year. It was one of his favorite activities, as much about social interaction as it was about the food.

He had other communities of friends in the Maplewood-South Orange area, from residents of the Kendal Avenue neighborhood — where he and his wife, Karen Harris Kingsley, raised their three children before moving to an accessible apartment — to his colleagues in the real estate community.

Sturm described trying to leave the Maplewood restaurant Coda, where the pair often met for drinks. “It was kind of impossible,” he said. “When we would walk (and later wheel) out, it would take 10 or 15 minutes. He knew everyone.”

Several people told NJJN about the melave malkas he often hosted on Saturday nights, to which he invited not just his synagogue community, but many friends. “The house would be stuffed to the gills with people,” Sturm said.

“He liked to connect people,” said Bogomilsky. One way he did that was through food.

“If you mentioned a matzah ball, he would say, ‘Oh, you want to make a matzah ball?’” said Bogomilsky. And you might end up with a recipe, or recommended store to buy the best ingredients.

But apparently, he could make connections on myriad topics. Maybe that’s because he loved to learn. He was constantly reading and listening to the radio, according to his wife. “He knew a little bit about everything,” she said.

That’s part of how he made friends across generations. As Frumie Bogomilsky pointed out, “Everyone felt like his best friend.” That included her own grown son, Yossi, who she said could schmooze with Kingsley for hours.

Sturm, who has made it a point not to talk politics with people with whom he disagrees, said he always made an exception for Kingsley, who made people feel at ease.

“He had a way of keeping it very respectful,” Sturm said. “He was not strident. He’d talk about data, about things he read. He never got heated.”

In the midst of a renovation of its building on Parker Avenue in Maplewood, the Maplewood Jewish Center community had plans to make the building accessible and install an elevator, in keeping with laws and building codes. But it’s no secret that everyone thought of the elevator as “Jeff’s elevator,” according to Frumie.

He was a constant presence in the community, attending services regularly along with all of the events, from poker nights to Purimspiels to upsherins, like the one for the Bogomilskys’ youngest son he attended just a few days before his death.

Born in Queens to Helen and Harry Kingsley, he grew up in Lawrence, N.Y., where he and his family were members of The Sephardic Temple in nearby Cedarhurst. He graduated from Lawrence High School, earned a bachelor’s degree from New York University, and went on to become a stockbroker and worked for hedge funds until he decided to spend more time with his family and became a realtor about 12 years ago. He and his wife met as friends in Lawrence. They lived in New York City until 2003, when they moved to Maplewood.

Services were held Dec. 19 with arrangements by Bernheim-Apter-Kreitzman Suburban Funeral Chapel, Livingston. He was buried at Mount Hebron Cemetery in Queens.

He is survived by his wife of 19 years, and three teenaged children, Emma, Sarah, and Harry.