Whenever Savta Shirley and I would meet at a family occasion, she would say, “So nu, already, when are the kids getting married? You know, no one is getting any younger.” At 94 years old, she was desperate to see her granddaughter and my son stand under the chuppah.

Earlier this year, when I looked at my two love seats in our living room, I was reminded of Savta Shirley’s comment. The love seats, too, were not getting any younger. So nu, already, when will we replace them? The corners were threadbare, and the cushions were starting to sag. But honestly, there were no noticeable stains. We may sink a little when we plop down, but they’re still so comfortable. And we love them! They feel like family!

I remember when two burly men rang the doorbell to our Brooklyn apartment to deliver them. It was a sunny November day. My husband had been jogging along the Promenade in Brooklyn Heights, a half block from where we lived. When he opened the door, how surprised he would be to see those two brown velvet, 60-inch love seats that we had ordered months before, sitting at right angles in our tiny living room.

Although we had been married for four years, this furniture was our first major purchase. Everything else came from the apartments we had grown up in, so this was a big deal. We were officially adults!

Our first apartment in Ann Arbor, Michigan was a furnished one. Well, in a matter of speaking. The living room sofa was brown and green plaid. It had three wooden legs. Two uneven bricks were the fourth leg. It stood on green carpet gently splattered with white paint that our beloved landlord accidentally had spilled while making some home improvements. Except for that fourth leg, the apartment had all the essentials. We further decorated it by buying an orange beanbag chair, which we kept for decades. That apartment, on the second floor of a dilapidated wooden house, that apartment was perfect – and beautiful — for two newlywed graduate students.

But eventually the charm wore off and we were ready to move on with our lives. When we relocated to Brooklyn to begin our careers, finding and furnishing a rental apartment were our top priorities. So when the new love seats arrived, and sat regally on the parquet floor with sunlight flooding the living room, we had also arrived.

This past season, when we replaced those 41-year-old love seats in our house in Montclair, sofas appeared in my mind like furniture ghosts. In the garden apartment where I grew up, the convertible couch dominated the living room. My parents opened and closed it every night for 10 years, while my sister and I shared a queen-sized bed in the one-bedroom apartment.

No matter how hard I try, I can’t picture the couch as a bed. Since my parents didn’t sleep standing up, and the unopened sofa was too narrow to sleep side-by-side, I have to assume the couch became a bed once I went to sleep. And where did they store the pillows and blankets when closet space was minimal? Another mystery!

Many neighbors shared my parents’ nightly ritual. In hindsight, I can imagine how exhausting and uncomfortable it must have been. The classic “Seinfeld” episode featuring Elaine sleeping on Morty and Helen’s uncomfortable sofa bed is hilarious. But when I think about my parents having to sleep like that, waking up with stiff necks and aching backs – not to mention all the people who have to live this way in 2021 – it doesn’t seem so funny. 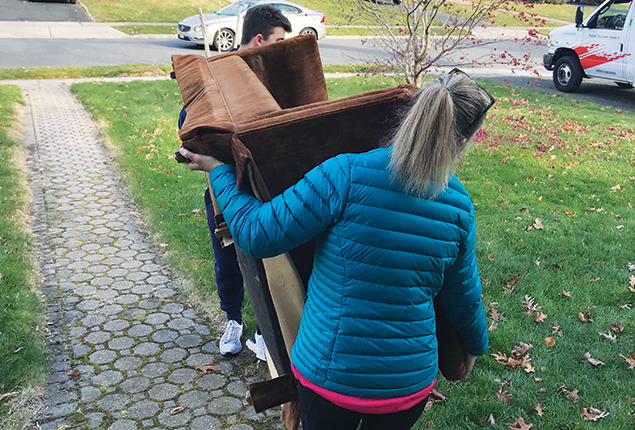 The loveseat is moved on to its next home.

When my family later moved to a two-bedroom apartment, it was time for my parents to make a lifetime investment and buy a real sofa. My mother would protect this important purchase forever. Although we didn’t have pets, and there were no babies to make a mess, we did have plastic covered cushions. In the summer when we sat down, we stuck to them like a grilled cheese sandwich. When we stood up, it felt like ripping a Band-Aid off your skin.

But at least it was a real sofa! That is, until my boyfriend/fiancé converted it to a single bed with sheets and a blanket on the occasional nights when he slept over. By sleeping on the makeshift bed, he spared himself the return drive from the southern tip of Brooklyn back to the northern tip of the Bronx while we were dating. Where was that convertible sofa when we needed it?

As my furniture phantoms recede, I am left with the history of our departed love seats. Perhaps that’s why it’s been so difficult to part with them. They followed our growing family to New Jersey. In 1986, at 6 years old, the love seats were still brand new. They faced each other by the fireplace, and like two big teddy bears, they comforted us during the next few decades. They welcomed guests at a b’rit milah and at an engagement party, and at every life cycle event in between. From the many birthday parties to the musical Chanuka parties and the shiva minyanim, they shared our lives. They never complained when we moved them temporarily to the dining room to better accommodate all the guests at a Passover seder or Thanksgiving dinner in the living room.

If we ignored them when we walked through the living room to the family room to watch TV, they knew we’d return. We would stretch out or curl up with a book or magazine. We would have great conversations and stupid arguments. We would cuddle as we read stories, sang, or rocked two generations of babies to sleep.

I remember when the kids jumped on the love seats like trampolines and slid off of them like a piece of playground equipment. I remember when I was nine months pregnant, and my husband had to hoist me up. Similarly, when my elderly father sank into the cushions, he needed a strong, helping arm to yank him into an upright position.

From their velvety vantage point, the love seats reflected the seven ages of man in Shakespeare’s “As You Like It.” From the “infant, mewling and puking” to the schoolboy and lover, to our bespectacled selves and our elderly parents, the sofas saw us at our best and our worst. No wonder we have separation anxiety.

But being more or less housebound during the pandemic, we suddenly decided it was time for some redecorating. Surely some changes in the house would brighten our mood. What about the kitchen? No, renovated 25 years ago, it will always be the new kitchen. Refinish the floors, paint the walls? No, already done, pre-covid.

The love seats? Oh my, it was time to replace them and find them a new home. We were ready. The Smithsonian Institute has Archie Bunker’s wing chair and Julia Child’s kitchen. I doubt the museum would be interested in the Silvers’ love seats, but someone else might be.

Fortunately, with the help of a refugee resettlement agency, we found two newly arrived Afghan families with bare apartments. A volunteer driver in a U-Haul truck picked up the sofas and delivered them to Elizabeth. I didn’t even cry! It’s time for other families to make new memories of holiday celebrations and life-cycle events. It’s time for new babies, the elderly and everyone in between to embrace the love seats. And it’s time for the love seats to welcome and embrace them in their new homes.

Merrill Silver and her husband live in Montclair; she’s a freelance writer and teaches ESL at JVS of MetroWest. Her work has appeared in the New York Times, Hadassah magazine, the Forward, the New York Jewish Week, and other publications. Find her at merrillsilver.wordpress.com