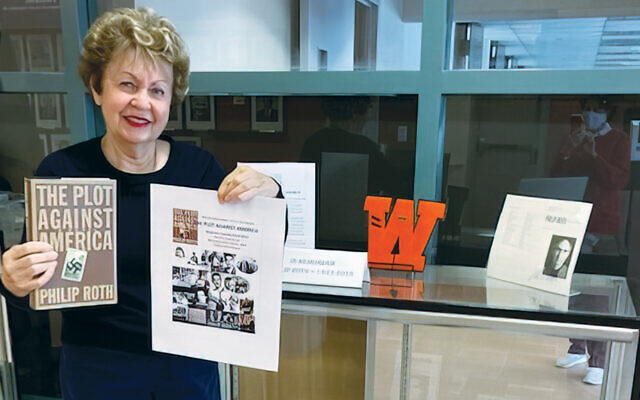 Philip Roth, the subject of a recently published biography by Blake Bailey, is of great interest to Linda Forgosh, the Jewish Historical Society’s executive director. She’s pictured holding a collage of photos of Roth and a copy of one of his novels, “The Plot Against America.” Mr. Roth was a long-term member of the JHS; his connection to Newark’s Jews and that city’s legendary Weequahic neighborhood are found in 20 years correspondence between him and Ms. Forgosh. Mr. Roth’s elementary school autograph book — inscribed “Don’t suck lollipops, Suckcess,” which was an early indication of things to come — and a catalogue from his visit to Aix-en-Provence in France for its Philip Roth Festival — are preserved for future JHS researchers. Mr. Roth was featured in the society’ exhibit “Born at the Beth,” and prominent in the exhibit “Weequahic Memoirs: Celebrating Newark’s Legendary Neighborhood.” A video filmed at the Osborne Public Library is memorable for his discussion of not having won the Nobel Prize for literature. In it, he thanked those assembled at the naming of a street in the Weequahic neighborhood as “Philip Roth Plaza,” saying that Newark was his Stockholm and his readers his judges.

Mr. Roth wrote 31 books over the course of his career. He did his writing standing up, working on a manual typewriter.

To donate historic documents or to become a member of the JHS email Linda Forgosh at lforgosh@jfedgmw.org.