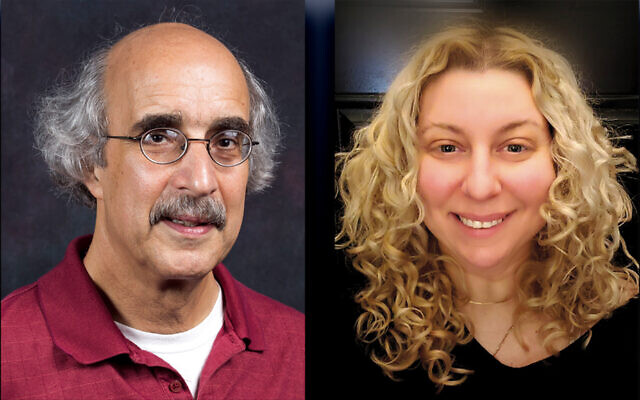 In March 2020, as covid began its rampage, the lieutenant governor of Texas, Dan Patrick, suggested that since older adults have nothing more to offer society, people over 70 should not take any extraordinary precautions against getting the virus. Their sacrifice would be an appropriate one if it could help get younger people back to work.

At the same time that Mr. Patrick was throwing older adults under the covid bus, the Marlene Meyerson JCC in Manhattan opened its Wechsler Center for Modern Aging. The center’s reason for being is all about reimagining the lives of those same older adults whom the Texan saw as having no value. The center started strong and continues to be strong. Someone should probably let Patrick know.

That person possibly could be Dennis Klein.

Dr. Klein, 72, is a professor of history at Kean University in Union, where he is the director of the Jewish studies program and runs a graduate program in Holocaust and genocide studies.

Dr. Klein, who lives in Teaneck, said that it’s unfortunate that some people are given to stereotyping other people, as Mr. Patrick seems to have done. “If we see others who are older and maybe even physically impaired, we think they are compromised in other respects, too,” he said. “That just isn’t true.”

Certainly Sarah-Kay Lacks, the director of Jewish Living at the Meyerson JCC, would agree with that. In 2019, Ms. Lacks was in Chicago at the annual seminar held by the Institute for Experiential Jewish Education. At this program, Ms. Lacks found herself gravitating toward older people; some were 50 to 60, and some were much older. Why was she feeling this pull, she wondered; soon she realized it was because those elders were filled with both energy and institutional knowledge. “It was like being with an incredible brain trust,” she said.

She came away from that seminar thinking there had to be some kind of award, similar to the New York Jewish Week’s 36 Under 36, but for people who were over 60. It was, in fact, essential, if for no other reason than to capture those people’s institutional memory.

But that wasn’t the only reason. “It was about elevating the experiences of older adults who have maximized their lives in amazing ways, and sharing them,” Ms. Lacks said.

That’s what Dr. Klein does every day in the classes he teaches at Kean.

Education is his life, Dr. Klein said, and his desire to share his knowledge doesn’t stop when he leaves campus. He’s committed himself to developing a program on restorative justice at Teaneck High School. “There’s racism in all history, even in Jewish history,” he said. “We’re obligated to talk about that.”

And he does talk about it. According to his 16 Over 61 profile, Dr. Klein is leading a task force on the future of small businesses after covid to develop a joint narrative on the origins of “structural hierarchies in the otherwise disparate circumstances of U.S. slavery and the Holocaust.”

Dr. Klein is all for bringing cutting edge subjects to his synagogue, Congregation Beth Sholom in Teaneck, where he is the co-chair of the education committee. Covid didn’t stop him. He brought Joy Ladin, a poet and English professor at Yeshiva University’s Stern College to speak; she’s the first openly transgender professor at an Orthodox institution. “I believe it’s important to push the boundaries of who we are and what we think,” he said. “It might be uncomfortable but it’s necessary.”

In 2020, Dr. Klein received a grant from the National Endowment for the Humanities underwriting a seminar he’s teaching called “The Search for Humanity After Atrocity.”

Back at the Wechsler Center, Ms. Lacks brought her idea to create an award for people older than 60 to its director, Susan Lechter, and Ms. Lechter bought into the idea right away. Their first idea was to go for 60 Over 60, but that involved a lot of people, and there was a pandemic on.

So they hit upon the concept of 16 over 61, a clever and more manageable number. To get the word out and to work with people who were enthusiastic about the initiative, the Meyerson JCC worked with the Jewish Forward to publicize it.

According to Jodi Rudoren of Montclair, the Forward’s editor-in-chief, “One of the core value propositions of the Forward … is to make connections across the generations.” The selection committee, all of whom are older adults, picked the first cohort. Results were announced in May. In July, the program culminated in a virtual celebration of the 16 Over 61. Those 16 awardees range in age from 66 to 99. Fully a quarter of them are in their 90s.

Dr. Klein, like many others of the 16 over 61, is involved in the life of his town. He’s running for a seat on Teaneck’s board of education because he believes that public schools have been neglected. “Anyone who wants an education deserves to have a quality education,” he said. “That means kids whose parents can’t afford to send them to schools that charge for admission. Even if we don’t send our kids to public school, we should have an awareness of the public education system and a responsibility to see it flourish.”

Like Dr. Klein, many of the other 16 over 61 have been or still are teachers. Sylvia Lustgarden of Toronto, 94, a former day school social worker and the director of the Committee for Yiddish at the Toronto Jewish Congress, now gives adult students private — and free — Yiddish instruction.

Muriel Mandell of New York City, 99, is a volunteer with SeniorNet and SeniorTechNYC, two organizations that help older adults learn how to incorporate technology into their lives. Ms. Mandell, no slouch when it comes to Zoom, has not let covid stand in her way. She uses the platform to continue her teaching. And she’s still writing children’s books and stories.

The youngest awardee, Dan Rothstein, 66, lives in the Boston area. He co-founded the Right Question Institute; it’s building on his realization that the reason for people’s inability to understand one another has to do with not knowing how to ask the right questions.

Each one of the 16 continues to contribute. They’ve not given up on those things that were important to them when they were younger and are still important to them to this day, though they have all learned to appreciate them more and to look for joy in the little things.

Though she wasn’t one of the 16, Sarah-Kay Lacks’ own grandmother lives a robust life. At 95, Bea Podorefsky of Teaneck still is a member of National Council of Jewish Women, she’s still an activist, she still is learning, and she still drives herself to her meetings.

Dr. Klein best sums up what the award is about. “It’s the idea of bringing attention to people who seem to be past the age of creativeness — but that isn’t true,” he said. “That’s what the award is really about.”

The lieutenant governor of Texas doesn’t know Dennis Klein or any of the others who make up the first cohort of 16 Over 61. Maybe someone should introduce them.