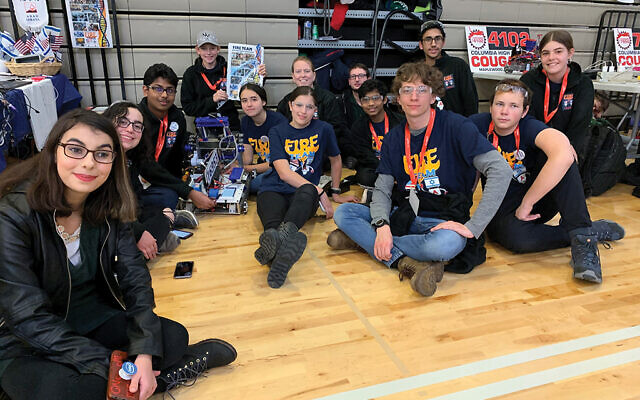 Most of the members of the F.I.R.E. team, comprised of students from Livingston and Arad, Israel.

During the regional qualifying event for the FIRST Tech Challenge robotics competition at Livingston High School on Dec. 8, the F.I.R.E. team hit some snafus. Their robot got strategically blocked and didn’t perform as well as some team members had hoped. And although they managed to win three out of five of their matches, they weren’t one of the top two competitors.

If the students seemed frustrated, their coaches had nothing but glowing reviews for their charges. That’s because F.I.R.E. had to overcome more significant challenges than most of the other teams: While half of the 14 students attend Livingston High School, the others live in Israel and attend high school in Arad.

The team had to create two identical robots, one in Israel to compete in the FIRST Tech Challenge there, and one for the competition in New Jersey. If they advance to the final international round through either the American or Israeli competition, the whole team will participate. Even though they didn’t place in the top two spots in Sunday’s regional event, their exemplary partnership earned them a place in the state championship by virtue of F.I.R.E. snagging the competition’s Inspire Award for the team that “celebrates the strongest qualities of all the judged awards.”

Their collaboration appeared seamless. “When they came to Livingston to prepare for the competition, we already felt comfortable working together,” said Pierce Rubenstein, a senior at Livingston High School. “We felt like we had been working together for a very long time.” 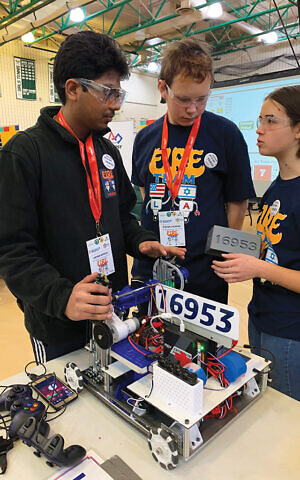 The unusual partnership was four years in the making, and thanks in no small part to the efforts of Livingston resident and Jewish Federation of Greater MetroWest New Jersey lay leader Marlene Lynn, who combined her two passions — Livingston High School robotics and the Arad community — to make this collaboration happen. Her son, now 27, was one of the first members of the Livingston High School robotics team, and Lynn is active in federation’s Partnership-2gether program, which focuses on creating relationships between Americans and Israelis over common interests. The robotics partnership is one of many similar federation projects.

Holding online meetings at least once each week, the F.I.R.E. team overcame challenges of language, culture, and logistics. They learned to keep a virtual, rather than physical, engineering notebook, and found ways to make all their work accessible; for example, if the Israelis tweaked the code or the drawings while the Americans were asleep, in the morning the Livingston students could see the changes. They even found an online “whiteboard” tool so they could all “write” on it while having conversations.

Rubenstein and teammate Eitan Brovkin of Arad were practically finishing each other’s sentences as they discussed some of their choices for the robot. Rubenstein explained that their robot was unusual for the competition because it was almost entirely custom-made using parts that the team designed and built themselves, in some cases using a 3D printer. Brovkin continued the thought, saying that the custom-made parts were necessary because, as the team decided to work through the metric system, they were unable to use a kit (a common tool for robotics competitions) to fit to their measurements.

Coaches and students alike attributed the strong ties among the students to the structure of the collaboration: In June, once everyone had signed off, seven students from Livingston traveled to Arad to meet their Israeli teammates, who hosted them in their homes.

“It was very, very hot,” said sophomore Aryan Bansal of Livingston, adding that he was surprised to find that most of the people he met in Israel were secular. The people were “very accepting,” and he enjoyed meeting the mayor of Arad. Along with visiting tourist destinations — including seeing Jerusalem and climbing Masada — the group had a chance to formulate a plan to optimize their long-distance association.

“It was a really great team-building experience,” said Bansal. Added Brovkin, “We created a common language and way of working that both sides are speaking.” 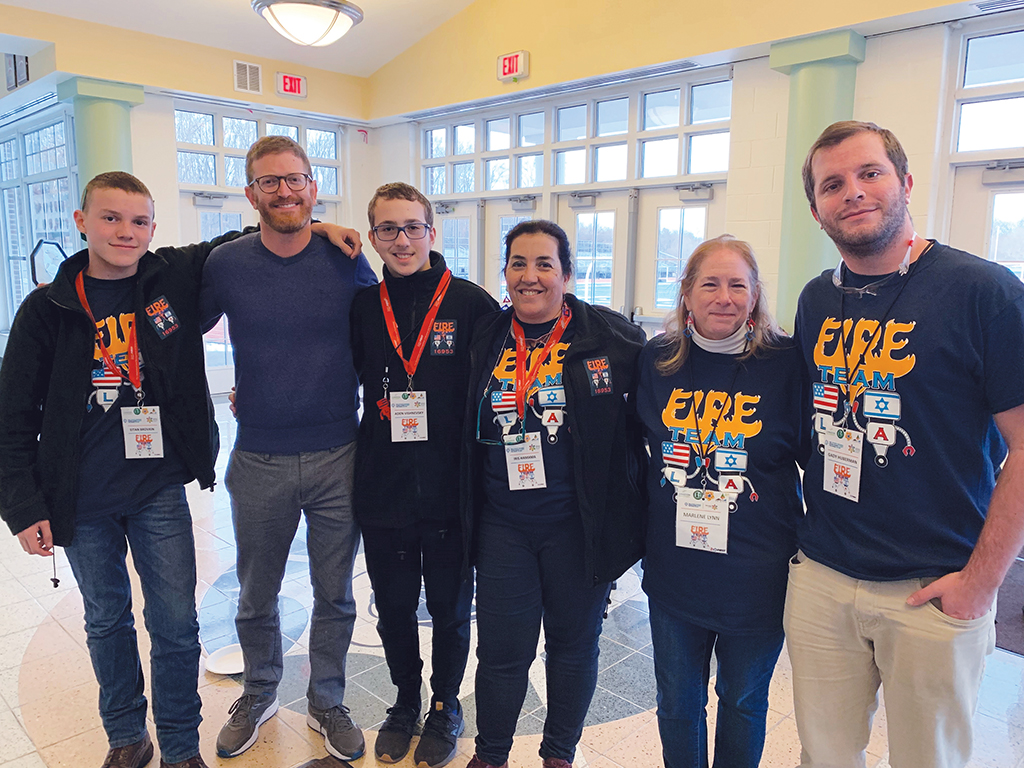 As far as the coaches and other supervisors were concerned, the lessons went far beyond the competition. “It doesn’t really matter how we did on the field today,” said Rob Rolling, supervisor for business, technology, and engineering in the Livingston school system. From his perspective, it was all about the real-world experience the students gain in figuring out logistical complications. “If I’m working with a team from Israel on developing a Sky Tower in Manhattan, these are the kinds of things that we’d have to figure out how to do,” he said.

Rolling said that the Israelis were better at certain parts of the project while the Americans were better at others, so for the final product, “we’re using a robot built in one country, and code designed in another.”

And according to Livingston High School robotics coach Jeanne Ziobro, there are life-long friendships being built among the students. Livingston junior Ally Mintz, a member of Temple Beth Shalom in Livingston, called their robot “a work in progress,” and said she wished that the New Jersey and Israeli teammates had a little more time together with less pressure from the competition. “It would have been nice to hang out more and have less stress,” she said.

Ziobro has enjoyed guiding her team and seeing them grow through so many challenges this fall. “I have never been so proud of a group of students that has not only morphed into a truly functioning team, but a family,” she said. “Through hard work, dedication, and perseverance, they overcame all the hurdles put in their way and rose above to be nominated for four awards, taking the most prestigious of them all, Inspire.

“As the award states, they are truly inspiring.”