Temima Baker, Orit Strassman, Belana Dworkis, and Danielle Dworkis hold the birthday kits they packed and will donate to a local food pantry.

About 10 third- to eighth-grade girls in Fair Lawn’s Congregation Darchei Noam community gather each month at the synagogue to learn new skills from women in the community and use those skills to accomplish a joint chesed project.

One woman taught them calligraphy, which they parlayed into beautiful get-well cards for hospitalized children. Another woman showed them how to make board games, which they included in “birthday kits” they compiled and donated to a food pantry.

The program was the brainchild of Aliza Strassman, whose daughter Orit recently completed third grade. Like most children, she had not been inside the synagogue during covid.

“Now they are coming back to shul and we wanted them to view it as a place to be with friends and do chesed, a place they’ll be more excited to come to for youth groups and davening,” Ms. Strassman said.

Happily, her idea turned out to be a perfect fit for a grant initiative the Orthodox Union is offering to encourage member synagogues to offer creative back-to-shul programming. The OU awarded $100,000 in grants to 35 synagogues in 15 states and one Canadian province.

“We probably would have done this program in some way, but winning the grant took away budgetary constraints and allowed us to think bigger,” Ms. Strassman said. “It also enables us to involve the girls in choosing gifts for the women who share their skills, adding a dimension of ‘hakarat hatov,’ expressing gratitude.”

The OU received about 300 submissions from its 400-plus member congregations. A committee chose proposals that represented both out-of-the-box thinking and opportunities deemed likely to rebuild and reaffirm the value of synagogue and community for the long term, according to OU President Moishe Bane.

“The submissions represent a large depository of ideas and are available to any synagogue that could benefit from the innovative thinking,” Mr. Bane said. “Ideas included hosting communal kiddush celebration as a ‘make-up’ for missed milestones, a back-to-shul fair, and a communal parlor meeting project to truly understand the changed needs of congregants.” 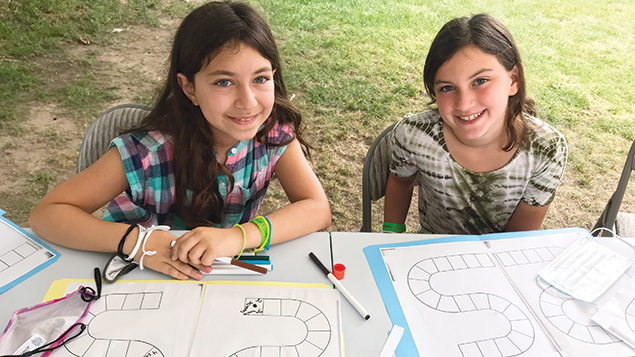 Three grants went to New Jersey synagogues; the other two are Congregation AABJ&D in West Orange — the shul’s initials stand for Ahawas Achim B’nai Jacob & David — and the Young Israel of Cherry Hill.

The AABJ&D program is titled Bring in the Backyard. The shul is offering “backyard minyan” spaces inside and outside the synagogue building in recognition of how comfortable many members felt as part of small, informal outdoor prayer services during the pandemic.

The West Orange congregation’s idea is to enable groups of backyard worshipers to continue praying together in this laid-back format on shul premises, either indoors or outdoors under tents. Each group is given full autonomy to run its minyan according to participants’ preferred guidelines — for example, when to start, and what optional parts of the liturgy to skip.

The shul provides a communal kiddush after services to help everyone get reacquainted, in the hope that by Rosh Hashanah the separate minyan format gradually will be abandoned in favor of a reunion of the entire congregation.

OU Synagogue Initiatives Director Rabbi Adir Posy said all the winning ideas have been “put together in a database, so that shuls of all sizes and from all over the world can have access to this great thinking and utilize it for their own shuls.”

“In every Jewish community, the shul is meant to be central to communal infrastructure and experience,” the OU’s executive vice president, Rabbi Moshe Hauer, said. “The covid reset is enabling shuls to rethink and enhance that role, identifying ways to strengthen the communal bond and the connection of all community members to Torah and Jewish life. Throughout this grant-making process, it has been inspiring to see the energies and thought being brought to bear on this issue.”

Since receiving the OU grant, the girls have completed three projects. Ms. Strassman showed them how to make no-sew blankets, which were donated to a nursing home.

“We are looking to add to our group in the fall when more girls go into third grade,” she said. “My daughter, now going into fourth grade, loves it. She’s always asking me when the next meeting will be.”