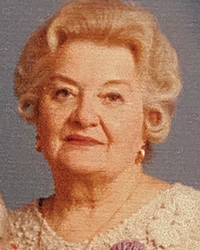 Mrs. Peitzer was the owner and creator of Peitzer Floral Arts. She worked on pressed flower stationery, portraits, bouquets, invitations, and jewelry for over 50 years, and sold her pressed flower art to many national department stores and celebrities. She participated in many arts and craft shows as well as trade shows at the Javits Center in New York City.

She was a Girl Scout Leader with her twin sister Joan when they were young.

She volunteered at St. Barnabas Medical Center with the pastoral staff for 20 years, volunteered for 30 years with hospice, and also visited local nursing homes to provide spiritual care. She studied with Rabbi Zalman Schachter-Shalomi and was ordained as a rebbe (spiritual teacher) for instruction on living a Jewish spiritual life. She led Jewish spiritual meditation groups in her home.

She enjoyed attending area writing groups and poetry. She wrote and published a book, “Forever Flowers,” which provides instruction about how to press flowers, and also wrote two unpublished books, The Keys to Happiness and Jacob’s Ladder.

She was a member of B’nai Shalom in West Orange and the JCC MetroWest’s Couples at Leisure group.

She is survived by her husband of 66 years, Herbert; two sons, Jay (Barbara) of Boca Raton, Fla., and Haywood “Woody” (Wendy) of Randolph; a sister, Irma W. Bryerman of Melville, N.Y.; and four grandchildren.

Private graveside services were held April 5 with arrangements by Bernheim-Apter-Kreitzman Suburban Funeral Chapel, Livingston. Memorial contributions may be made to B’nai Shalom.