Beyond Reposting helps teens get beyond memes to think for themselves.

In fact, they’re so reasonable we might wonder why it took so long for someone to create them.

To its credit, Caldwell’s Agudath Israel immediately recognized the value of an idea proposed by two of its teenage members, Eliana Rosen and Marlee Perlmutter.

The shul’s religious school administrator, Jacelyn Gluska — everyone calls her JC — knows the girls well, and she calls the 16-year-old high school sophomores, both from North Caldwell, “quite remarkable.”

Remarkable, indeed. Not only did the girls want to dig deeper into the issues highlighted on social media to find out what’s real and what’s not, but they knew that they needed guidance and that they wanted to share the information they uncovered with other teens.

Their program, “Beyond Reposting,” does exactly that.

The process began when the girls’ mothers — “remarkable in and of themselves,” JC said — approached the synagogue education director, Susan Werk, to see if she might work on the project with the girls. Excited by the idea, Ms. Werk brought it to JC.

“It was all their idea,” Ms. Werk said. “I’ve known them since early childhood. They’ve always been the type of girls who are natural leaders. When the pandemic hit, they were scrambling around trying to figure out what to do.”

In the aftermath of the George Floyd killing and the racial unrest that followed, all they saw online was “hatred and political tension,” Ms. Werk continued. “It definitely pushed the envelope with these girls. They were upset and wanted to understand more about these issues.”

They wondered if the shul might put together a discussion group. “They wanted it be peer-led. At that point, they were ninth-graders.” The girls wrote and implemented their own curriculum. “They were so passionate,” Ms. Werk said. “They could have taken it to other locations” — many of the issues they discuss are not inherently Jewish topics — but instead “they chose to develop their ideas in a Jewish-based place. They knew it was a safe haven and they could express themselves without being judged. We’ve given them tools to bring to other places, where they can develop it more. They deserve real credit. They’re creating peer advocates, intentional learners.”

Beyond Reposting asks the teens to question and talk about articles, Ms. Werk said. “It’s a beautiful program, with real heart behind it.”

Explaining the genesis of the program, JC noted that right before the pandemic shutdown, when the teens learned that summer camp was canceled and they would have to prepare for a virtual school year, “the girls were in this crazy space. They needed an outlet. There was too much happening in the world, and they were looking to make sense of it.”

The girls were interested in finding resources as well as models of reaching out and seeking support. In this regard, JC said, their mothers were role models. “Marlee’s mom, Mandi, has been a political advocate for many years, going to rallies and setting a good example. Eliana’s mom, Deborah Rokhsar Rosen, is active in the shul and on the social action committee. She’s always involved in bringing in different organizations for us to participate in.”

After their mothers visited Ms. Werk, she and JC began to meet regularly with the girls. “They see so much news on social media — the pandemic, Black Lives Matter,” Ms. Werk said. “They don’t know what’s real and what’s not. They tried to understand what they were struggling with, and I learned along with them how to navigate different media sites, find reliable sources, discern what was true and what was opinion.

“Eliana and Marlee wanted to better understand the confusing and often toxic messages they were bombarded with on social media. Their immediate goal was to figure out how to process information and form their own educated views. The more posts we discussed, the deeper we would delve into maddening disparities and disappointing systems in our world. Armed with information and access to resources, they explored the world with unimaginable depth and insight.” 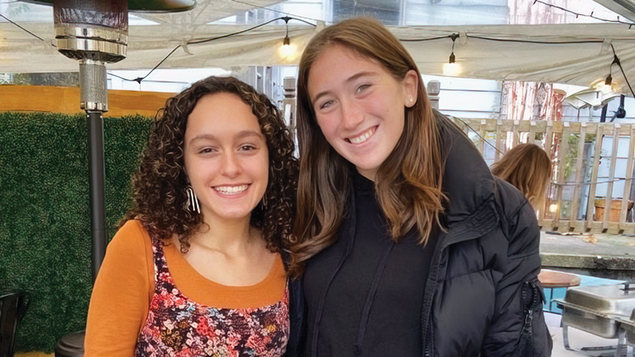 The team began to meet four or five times a month. “Most of the time we would sit down and I would ask, ‘What are you thinking? What did you see?’ They always had lists of things. We went through the list.” The girls used email trees to reach other teens, and JC sent emails to parents. People were invited to join on monthly Zoom sessions to discuss the selected topics. “The number of people depended on the topic,” JC said; while some boys do show up, generally they are outnumbered by girls. Attendance usually ranges from 15 to 20 students.

When it became safe to meet in person, the girls began to hold the sessions in their own backyards. In addition, “They were really interested in expanding and teaching younger students.”

In September 2021, Beyond Reposting began engaging middle school students, with early sessions focused on advocating for causes through letter writing and reaching out to government representatives. A recent session centered on mental health. “Everyone was engaged, and they spoke up,” JC said. “They mentioned how they respect and look up to Marlee and Eliana,” suggesting that because the teens were closer to their age, they understood them better.

Seeking to engage and increase advocacy among their peers, Ms. Gluska and the two girls developed discussions on subjects including racism, being a bystander, privilege, equal representation, Jewish history, self-empowerment, body positivity, menstrual equality, and feminism. They also sought ways to mobilize, explored relevant organizations and their missions, and examined reposting patterns on social media.

“I think they’re all learning about leadership, even the younger ones,” Ms. Gluska said. “What it means to be a leader who listens, leads, has a voice, and empowers others.” The teens already have started to talk about younger students taking over from them. They’re also talking about turning the initiative into a club at their school.

The girls are proud of what they have achieved. Recalling the creation of the program, Eliana said that in June 2020, faced with a barrage of social media posts on hot-button issues, she turned to her synagogue. “I had worked with JC and Susan before, in USY and Hebrew school, and I knew they would welcome the Beyond Reposting idea with open arms,” she said. Creating the group was, in effect, “creating a place for me to learn more about these issues and talk about them.”

Eliana’s family joined the shul in 2008 and is active there, and Eliana clearly enjoys hearing what the community is doing and to join whenever possible. “I’m always involved in mitzvah activities for teens,” she said. “I wanted to create a program for important conversations.”

Her mother also is part of a program that talks about racism and how to combat it. “But this is different,” she said. “It’s more about having conversations on a range of topics. Teens have something to say. We focus on things we know teens care about.”

This spring, the discussion group transitioned to a live format. “Now that there was a chance to do something in person, we wanted to jump on that opportunity,” Eliana said; the group was suffering overall from Zoom fatigue. In person, “the conversation flowed better, and you could turn and talk to a partner.

“We’re not teachers in any capacity. We’re just facilitating. We’re trying to teach the principle of doing more than the bare minimum, to take steps to better our world.

“We created an opportunity to learn how to talk about issues,” even when there is some stigma attached, she continued. And not only has leading the group taught her the skill of facilitating a meeting, but “it helped me learn what I’m passionate about, what I care deeply about.”

Eliana doesn’t think the program would have worked without the help form JC and Ms. Werk. “We’re lucky to have JC on our planning calls,” Eliana said. “She has a background in education and is savvy about how to pull kids in. We couldn’t have done it without her.”

Ms. Gluska also has demonstrated “how to portray issues without bias” and has provided sources that give the teens different perspectives.

“Marlee and I have started to think about the longevity of the program and how it can go farther than us,” Eliana said. “Her sister is in middle school and she wants her to go through it. I always said I wanted to change the world. This has shown steps I can take. You can’t change everything, but you can choose what you can change.”

She hopes participants will “figure out a way to use these lessons and make the world a better place.”

“I think when we started, we walked into it not really knowing how to plan a session like this,” Marlee said. “We didn’t have many leadership skills.” Now, those skills have grown. In addition to creating a discussion group, “we created a sense of community — co-learners passionate about similar topics.”

Like Eliana, Marlee has discovered the issues she’s passionate about. She is particularly interested in destigmatizing menstruation as well as making menstrual supplies equally available and accessible to all women. The topic was tackled during Women’s History Month.

The group’s main goal is to highlight and increase understanding of issues, Marlee said. “We slowly incorporate more action pieces, like writing to legislators.” While giving donations is a positive thing to do, getting legislation passed ultimately has more impact, she said.

Just as JC has trained her and Eliana in the skills they need to lead these groups, “we try to model leadership and give these skills” to the younger students, Marlee said. “One of our goals is for this to become like ‘normal programming’ when we’re not here. Overall, we try not to come across as teachers but as co-learners. We want to learn along with our peers.”

She credits her mother with helping to make her socially aware. “I go with her to marches and rallies,” she said, citing women’s marches, rallies against  antisemitism, and Black Lives Matter rallies as examples. “It’s very special to go and rally for our futures together,” she said, highlighting the multigenerational nature of these experiences.

Marlee has been a member of Agudath Israel all her life. Working on Beyond Reposting has “created a new meaning of what the synagogue means to me,” she said.