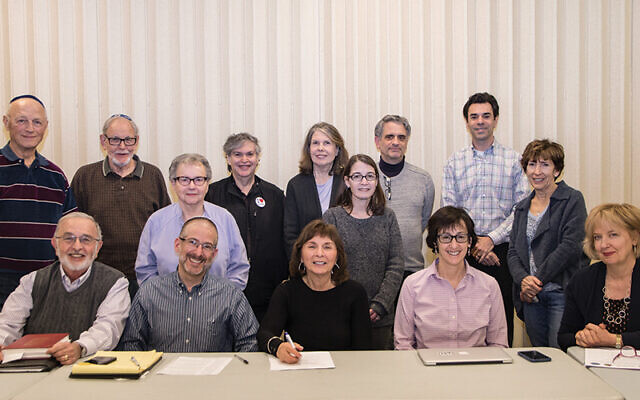 Supporting ways to protect the environment and fight the threat of climate change has long been an important issue at Congregation Agudath Israel (CAI) in Caldwell. Spearheading that effort are the synagogue’s clergy and leaders and, in particular, members of its Environmental Committee and its cochairs, Harriet Sepinwall and Mark Lipsy.

A longtime member of Green- Faith, a Highland Park-based global interfaith environmental action organization, CAI took a major step forward by becoming a participant in Hazon’s Seal of Sustainability program. Formed in 2000, Hazon is a Manhattan-based organization that calls itself a “Jewish Lab for Sustainability.” With 90 participants nationwide — CAI is the third in New Jersey — its goal is to triple that number over the next three years.

“It’s really gratifying to be able to do our environmental work in conjunction with our Jewish values. So much of Judaism is interlocked with the environment,” said Sepinwall, a resident of Pine Brook who, before her retirement in 2016, was a professor of Holocaust studies at the College of Saint Elizabeth in Morristown and director of its Center for Holocaust and Genocide Education, which she founded. The synagogue began its environmental preservation efforts almost 30 years ago, Sepinwall said, and this is the second time she has helmed the committee.

The committee conducts numerous activities to educate the congregation. One is a a program to advise families about ways to offer a “sustainable kiddush” after a bar or bat mitzvah service. For example, Sepinwall said, they ask congregants to use compostable utensils and paper plates. “We also make sure all lights in rooms that are not being used are turned off,” she said. These are some of the “little things that really add up and are part of the goals of the Hazon seal.”

The committee organizes an annual environmental Shabbat — Shabbat Bereshit — with speakers and dinners. This year’s program, on Oct. 25-26, featured Rabbi Michael Cohen of Israel’s Arava Institute for Environmental Studies. He presented a number of talks, telling congregants that “environmental issues know no political borders” and sharing messages about environmental preservation and conservation found in the Torah.

The committee also sponsors a seder for Tu b’Shvat, the Jewish New Year of the Trees, stressing its message of nature preservation, and continues to engage with GreenFaith and take part in other interfaith events designed to involve the entire community on combating climate change.

“Science is telling us we might not have a planet if we don’t do what we need to do now,” said Sepinwall. “This is something that involves everybody, and Hazon helps us learn and take a leading role.”

The Hazon Seal of Sustainability program provides direction and support to advance education, action, and advocacy for Jewish institutions and the wider community. It offers guidance on, among other issues, eating healthier food, lowering one’s carbon footprint, and creating less waste. Its mission is to create a community of like-minded individuals who together can promote an effective Jewish response to the climate crisis.

To be accepted in the Hazon Seal of Sustainability program, participants first provide an audit of their environmental impact, then commit to making significant and long-lasting improvements, which is where Lipsy, who is responsible for handling CAI’s interaction with Hazon, comes in.

“Hazon offers a lot of support and wants us to grow in the program in our way,” said Lipsy, a Caldwell resident. “A lot of what we’ve done involves food. This is a busy place, with food being served seven days a week, sometimes at an event involving 250 people.” As Sepinwall pointed out, Lipsy said, “We have eliminated plastics and use a lot of things that are compostable.

“We’ll keep growing environmentally from there.”

Hazon’s seal program includes three audits, each designed to produce additional steps to environmental awareness. Participants are asked to complete at least one, with each providing a list of ratings revealing in what areas an organization has made progress and where there is room for improvement.

Lipsy wants to assess CAI’s standing in all three areas. “There is a lot we’d like to do,” he said. “With Hazon’s help, we have a framework of where to attack, and we are flexible with what we want to do. We are looking at possibly installing solar panels and doing an energy audit of the synagogue. We have both a lot of enthusiasm and a lot of concern.”

Rabbi Alan Silverstein, CAI’s senior rabbi, has been a supporter of expanding environmental awareness at the synagogue since his arrival in 1979. “We aim to educate our congregants in good environmental practices with our actions in our synagogue every day,” he said. He mentioned Agudath Israel’s education program, under the guidance of its director, Susan Werk, which has made great strides in teaching the community’s young people the value — and particularly the Jewish ideal — of protecting and preserving the world and its resources.

Hazon founder and CEO Nigel Savage, who has been a guest speaker at the synagogue, said he and his organization’s leaders “are excited that Agudath Israel and its visionary rabbinic and lay leadership have joined us at the forefront of fighting the environmental crisis.”