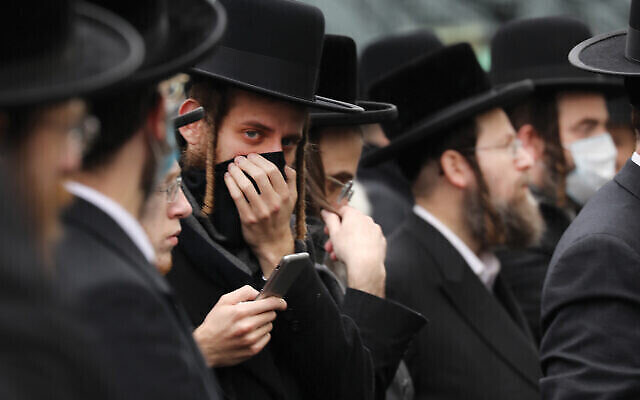 Hundreds of Orthodox Jews gather in Borough Park on Sunday at the funeral of a rabbi who died from coronavirus. The outbreak is hitting charedi neighborhoods especially hard. Getty Images

Tami Frankel, a nurse working at Maimonides Medical Center in the heart of Brooklyn’s charedi Orthodox enclave of Borough Park, saw her professional life overtaken by the coronavirus in a matter of days.

Even for Frankel — a health-care professional and member of the area’s expansive Orthodox Jewish community who had been warning family and friends to “social distance” for weeks — the “sudden, exponential shift” in Covid-19 cases came as a shock.

While data is difficult to come by amid a still-surging pandemic, tight-knit Orthodox communities across New York and New Jersey have been particularly hard hit by the virus, according to local medical professionals and community members.

Data from New York City’s Department of Health and Mental Hygiene published April 3 showed Brooklyn’s Borough Park and Crown Heights, home to large charedi Orthodox communities, among the neighborhoods with the highest case counts in the city. County investigators in Rockland County, N.Y., said most of their area’s cases are found in Spring Valley and Monsey, also home to large Orthodox Jewish communities.

Orthodox newspapers are filled with death notices, including some for leading rabbis of several chasidic movements. Deaths from the virus have overwhelmed one Brooklyn Orthodox funeral home, according to the Forward.

On Monday, in a strongly worded rebuke, N.Y. Gov. Andrew Cuomo urged municipalities to fine members of the Orthodox community and others for their flouting of social distancing rules.

The governor called on local governments to enforce the fines he has imposed for violating the state’s stay-at-home order. Cuomo said on Monday he is doubling the maximum for such fines to $1,000.

The spread has also been marked among Israel’s charedi Orthodox, according to a recent report by The New York Times. Though charedim make up only 12 percent of Israel’s population, 40 to 60 percent of coronavirus patients at four major hospitals were from the community, according to the report, citing Israeli media.

Large charedi Orthodox communities were particularly vulnerable at the outset of the outbreak, with regular religious services, large families, and large gatherings an essential part of their culture. The novel coronavirus also began spreading in the United States shortly before Purim, which began on March 8, at the beginning of widespread calls for school closures, crowd restrictions, and stay-at-home orders. Packed readings of the Book of Esther and Purim parties were held around the region. It wasn’t until March 18, following a call from the White House, that 15 leading Orthodox rabbis in New York, including prominent chasidic leaders, urged followers to shutter communal and educational institutions and adhere to social distancing protocols.

Still, there have been complaints from within and outside the community that religious services and other gatherings have continued unabated.

On March 30, nearly 100 attendees gathered near the Canadian border for the funeral of a member of the chasidic enclave of Kiryas Joel, an apparent Covid-19 victim, according to a source who was invited but declined to attend and asked to remain anonymous for fear of communal retribution. (Funeral attendees told the source about the large turnout.)

And on March 29, in the charedi enclave of Lakewood, nearly 50 people were discovered by police gathering outside a private home for a wedding.

Such reports have led to wide criticism of the charedim, especially on social media.

But others contend that the community is being unfairly singled out for the transgressions of a few.

Bernie Gips, a coordinator for the Hatzolah ambulance service in Borough Park for nearly 46 years, said he is frustrated by the public perception that the charedi Orthodox community is not taking the coronavirus threat seriously.

“People think the Orthodox are not complying — it’s not so,” he said, detailing efforts his local Hatzolah chapter has made to spread word about the virus’ severity to those who don’t have internet access. Among those efforts was the door-to-door distribution of leaflets.

He estimated that “95 percent” of Orthodox institutions — from synagogues to kosher catering halls — are shut down at this point.

Avi Shafran, director of public affairs for Agudath Israel of America, the charedi Orthodox group, argued in the Forward that the calls for distancing measures “have been heeded by all but the tiniest minority of the community.”

Some say members of their community still haven’t gotten that message.

A Chabad-Lubavitch businessman in Crown Heights who has been particularly vocal about enforcing social distancing said he has “made many enemies” because of his attempts to “shame people into staying home.”

“Congregating, around holidays and Shabbos, is my community’s way of life. So we got hit harder.”

Community insiders also say the demands for social distancing clash with other community norms, such as loyalty to religious ritual; a dearth of access to mainstream media; a steadfast belief that those engaged in religious activities will not be harmed; and a deep-rooted skepticism toward edicts imposed by authorities outside the community.

“If you’ve grown up to ignore the outside world, why would that change now?” said the source from within the Borough Park community who was invited to attend the large funeral that took place last week. “In the community, we’ve always adhered to our own set of rules.”

“In tight-knit Orthodox communities, there is a healthy dose of skepticism when orders come from the ‘authorities’ and not from within,” said Blima Marcus, a nurse practitioner at Memorial Sloan Kettering Cancer Center and a member of Borough Park’s charedi Orthodox community.

Marcus said that the Orthodox community’s limited access to popular media contribute to an underestimation and skepticism toward medical threats.

“For the ultra-Orthodox, there is no TV, no radio, no secular newspapers,” she said. “The enormity of what was happening globally was not a daily reality for most of the community. Without context, orders to stay at home in 2020 seemed farfetched.”