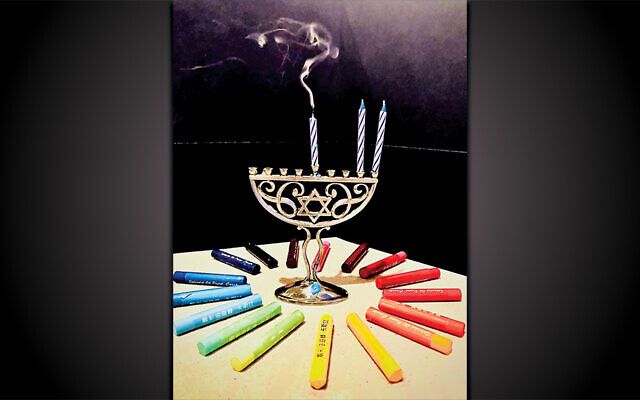 This is the award-winning photo that Maya Blau took.

The newly opened Anu — Museum of the Jewish People kept the second part of its name, the part after the hyphen, but Anu, which means “we,” replaces Beit Hatfutshot, which means “diaspora House” and admittedly is a mouthful.

The museum bills itself as “the world’s only museum dedicated to celebrating and exploring the experiences, accomplishments and spirit of the Jewish people from biblical times to the present.” It’s technologically advanced, definitionally ambitious, includes genealogy databases searchable from home, and is newly open to visitors.

The museum just held a competition for teenaged photographers called Jewish Lens. It was open to students from around the world; its theme was “My Connection to the Jewish People”; and it was judged by a well-known, American-trained Israeli photographer, Zion Ozeri. More than 2,000 young photographers from more than 30 countries submitted their work. Twenty of them won. Six of them are from the United States.

One of those six is from New Jersey. She’s Maya Blau, who lives in Maplewood and is in sixth grade at the Golda Och Academy in West Orange.

Maya’s win fits into the larger context of Anu’s focus on the interconnectedness of the Jewish people across time and space. Her grandfather, Larry Blau, also is a photographer; Maya’s talent is innate, Mr. Blau said, but he enjoys nurturing it. Both of them see their work, as a very young and a not-so-young photographer, as linking them to each other, to what they see and how they see it, and, not incidentally, to the Jewish people.

The photograph Maya took is of a Chanukah menorah; there are two unlit candles in it, and smoke curls from the third candle, the shamash. The menorah is ringed by a bright circle of pastels.

She took the photo about a week after Chanukah, Maya said, so chanukiot still were much on her mind. “I took it with my iPhone,” she said. “My grandfather just gave me a camera, though, so now I have my own camera.”

The shot she sent to the competition was the result of a great deal of thought, experimentation, and effort. 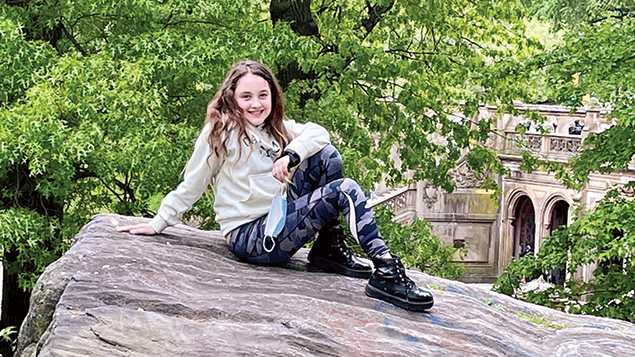 Maya Blau smiles from a boulder in Central Park.

“It has a dark background,” Maya said. “I took a blue folder and put it in as background. My family has multiple menorahs, but I used this one because it’s my family’s travel menorah. We’ve been in Colombia with it, and a bunch of other places. It’s small, and easy to travel with, so I used it.

“I took a bunch of photos, and my nanny, Maria, helped me. I tried taking photos of the candle without lighting it, but I liked it best where there was smoke around it, because it was frozen in time. My nanny held the candle to get the smoke right.

“I also put my oil pastels around it because I love art so much, and I also wanted to put those two different kinds of art” — photography and drawing — “together. And I think that they kind of add a pop to the pictures.

Maplewood is a town full of artists, and Maya appreciates that. “I love it,” she said. “I love how there are a lot of people who love art and culture, which I also love. And I feel like this town is family, and everyone supports each other.”

She plans to learn more about photography from her grandfather. “He loves photographing animals,” she said. “He has a bird feeder at his house, and he taught me how to take photos of birds and animals. They have a big backyard, with a bunch of flowers, so I get to photograph a bunch of things. I love taking photos there.”

Larry Blau, 72, lives in Ossining, in northern Westchester County. He fell in love with photography when he was 8 years old, living in Brooklyn; he worked at it with both heart and head, but then set it aside for his career as an accountant. He picked it up again in 2004, and since then devoted at least part of his time to it. Now, though, as a prostate cancer survivor, he has decided to wind down his business and focus on his art.

So far, Mr. Blau said, Maya is the only one of his eight grandchildren to be interested in photography, but then, as he pointed out, she’s the oldest, so there’s still lots of time for the others to be drawn to it as well. (Another of his grandchildren is Maya’s brother, Oren.)

But Maya has something that can’t be taught, he said. He believes that the ability to see as a photographer must see has to be innate, although if you have it, it can be developed (or, of course, it can be wasted). So “I am not going to teach her about the settings on the camera, or not at first. 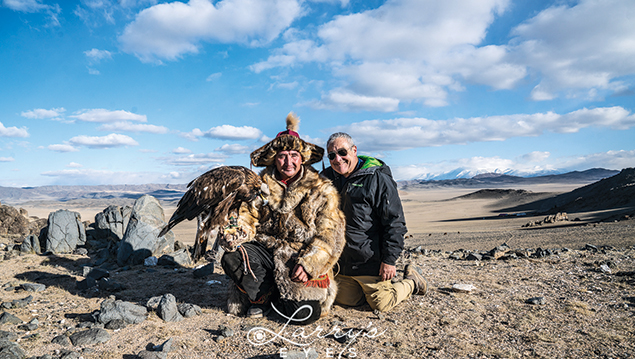 Maya’s grandfather, Larry Blau, with an hunter and his eagle in Siberia.

“I’m not going to teach her about differences in aperture or shutter speed, or how to balance a photo, or any of that stuff. I want to develop her eye, because to me that’s what photography is all about.

“Later I can teach her how to set a camera, but first it’s about her eye. And if you don’t have that eye, you might as well just use your cell phone.

“I love photography because it slows my world down,” Mr. Blau continued. “I see things that normally I would not see. I want to teach Maya how to slow her world down. I want to teach her to have patience, and how to see the shot before it is there.

“To me, that’s what photography is all about.”

He’s traveled to all seven continents and taken photographs on all of them, Mr. Blau said. He loves being surrounded by nature, by foreign vistas, by deeply unfamiliar sights in novel places, but, soon after he and his wife, Maya’s grandmother Olivia, finished a photography trip to the Serengeti in northern Tanzania, the two of them found themselves in covid lockdown at home. “The pandemic made me a much better photographer,” he said. “I couldn’t put my camera away, just because I couldn’t go to these exotic locations and take pictures of lions and elephants and giraffes and those beautiful birds. So we have a summer home in the South Fork on Long Island, and I decided that I was going to expand my creativity.”

So the Blaus went out to the island’s east end, and Larry Blau spent a lot of time among seagulls.

“I thought, how do you take a unique and interesting picture of a seagull, when many people take seagulls for granted? So that’s what I concentrated on, and it made me a more creative photographer.

“Now, I try to get into the world of my subjects. If I see a bunch of seagulls, I will lay down on a blanket — I will have my camera with me — and the seagulls will see me and back off, but once they become used to me being in their environment, they will come closer to me. They will let me into their world.

“Honestly, I believe that I have communicated with some of these birds, by having patience. By letting them get used to me.

“And that’s the kind of stuff I’m concentrating on with my granddaughter. I want her to develop her eye.”

This summer, grandfather and granddaughter will work together; Larry plans to help Maya develop the patience she needs to go along with the eye she was born with.

“I wasn’t with her when she took the picture for Anu, but when I see pieces like that from her, it really encourages me,” he said. “She is a diamond in the rough.

“She really is extraordinary.”