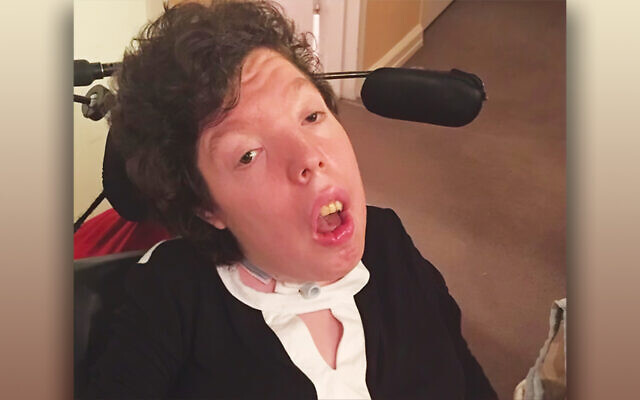 Next week, Congregation Shomrei Torah in Fair Lawn will host a panel discussion on “Embracing all Differences.” (See box.)

It is the first in what will be an ongoing education series on inclusion in the Jewish community. It’s sponsored by Nancy Fish and Larry Bravman in memory of their daughter Ilona Bravman, who died in July as a result of spinal muscular atrophy. She was 28.

“She was diagnosed at 11 months old,” Ms. Fish said. “We were told she had a five percent chance of living to age 2. We were preparing every day for her to die.”

In fact, she grew up “and defied every expectation we had of her.

“She was very bright,” her mother continued. “She was partially mainstreamed in a public school and functioned very well.”

As she grew up, Ilona was fitted with a wheelchair. “She was a quadriplegic with very limited motion in one hand,” Ms. Fish said. But that limited motion enabled her to use a computer to speak. “She did everything on this computer,” including email and Facebook. “We made sure our daughter had every educational opportunity” — including taking part in a dance program.

“She did everything with joy and determination. She never felt sorry for herself. She loved being among people.

“She taught us so much about how to live life and not to look at disability but to look at ability. You could look at her and think she’s not capable of anything, but she was capable of so much. My other kids” — Amy and Scott, both younger than Ilona — “became better people than they would have because of Ilona. She was just their sister.”

Ms. Fish said she “had to embrace joy in a way I hadn’t before. I looked at small things differently than other people. If Ilona could lift her head for 10 seconds, it was a cause for celebration. What other families took for granted — like watching my three children laugh and have normal exchanges — for me was a miraculous thing.

“I also learned determination. This child, no matter what she had to deal with, she did with such perseverance.”

Ms. Fish said the idea for the “Inspired by Ilona, Embracing All Differences” series originated at Ilona’s shiva. “We heard so much about how people were so inspired by her. We decided to do something in her memory, a speakers series twice a year on how to focus on ability and embrace all differences.

“It’s not always going to be on people with disabilities. We’re hoping to do one on embracing the LGBT people in the community.”

For this first session, there will be three speakers: Rabbi Judah Mischel, the director of Camp HASC, which serves children with special needs; Zeesy Grossbaum, director of the Friendship Circle of Bergen County, and Adeena Penner, described in the program’s flyer as a “proud mother of a superstar young man with autism.”

It will be “a forum where people will be able to have takeaway ideas on how to make changes in their life and in how they approach people who are differently abled,” Ms. Fish said.

Ms. Fish also noted that her synagogue community, Congregation Shomrei Torah, was wonderful for her daughter.

“They were embracing,” Ms. Fish said. As was Englewood’s Congregation Ahavath Torah; Ilona’s aunt is a member there, and the Bravman family visited frequently.

Although Ilona’s medical issues prevented her from attending Camp HASC, she was very involved with the Friendship Circle. “We contacted them and they were so incredibly helpful,” Ms. Fish said. “What we really needed initially was people on Shabbos. They arranged for kids to come over. They were amazing. They became lifelong friends.”

When she was older, Ilona attended the day camp Friendship Circle holds at the Frisch School in Paramus during winter break. That’s when children attending public school are on vacation but siblings attending yeshiva are still in school, making a full family vacation impossible.

Ms. Grossbaum is co-director of Friendship Circle in Bergen County with her husband, Rabbi Moshe Grossbaum. The two also lead the Chabad of Paramus.

“You felt a positive energy about her,” Ms. Grossbaum said. “No matter what we were doing, she was so happy to be around friends. Whatever it was, she was up for it.”

Ms. Grossbaum said that more than 200 families with kids with special needs are involved in the Friendship Circle, which in addition to providing Shabbat home visits and the winter camp offers a Hebrew school (held at Yeshivat He’Atid in Teaneck), weekly meetings with teen volunteers, and programs for parents.

The core of the programs are teen volunteers. (Frisch lets students miss class to volunteer for the winter camp.)

“Nothing we plan is able to happen without the help of teenagers,” Ms. Grossbaum said. The programs require one-on-one attention from the volunteers.

Her message to teens (seventh grade and up): “We’re just asking you to show up and give us your time, your teenage energy, and your smile.”

The volunteers “can see how lifesaving it is for the kids with special needs, and it bounces back. There’s nothing we can give the volunteers that compares to the feeling they get when they leave an event. It’s just so rewarding,” she said.

Ms. Grossbaum said the upcoming panel “is continuing a conversation that has been going on a long time about how we make our communities more inclusive and special needs-friendly. We’ve done a tremendous job, but there’s still a ways to go.”

She said she remembers when she was a child and bumped into a group of kids with special needs “and being absolutely terrified.

“A program like Friendship Circle, where we start getting the kids involved when they’re fairly young, will have a big impact,” she said. “They will grow up to be more inclusive adults, who are not afraid of children with special needs, who understand that deep down everyone is the same.

“It gives a lot of hope to parents that their child will grow up and will have friends in the community. They’re not hidden. They come to shul, they come to holiday programs.

She added that “It’s incredible how many of the teens who volunteer with us move into fields that help the special needs community,” such as occupational therapy and special education.

Ms. Fish said the message she wants the panel to convey is “for people to feel comfortable with people who are differently abled, and to not look at them as less than. Look at what they have to offer, not what detractions they have.

“Certain people looked at my daughter and because she couldn’t speak, assumed she wasn’t intelligent. I want people not to make assumptions.”

What: “Inspired by Ilona: Embracing All Differences,” a panel discussion

Who: Rabbi Judah Mischel, director of Camp HASC; Zeesy Grossbaum, director of the Friendship Circle of Bergen County; and Adeena Penner, “proud mother of a superstar young man with autism.”

Where: Congregation Shomrei Torah, 19-10 Morlot Avenue, Fair Lawn, and on a livestream at www.shomrei-torah.org