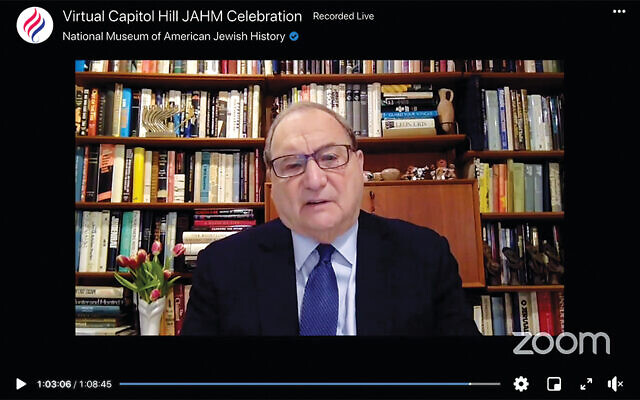 Abe Foxman accepts his award on Zoom; in his remarks, he talks about optimism and hope.

None of us has any idea of who any small child will grow up to be. We can’t look at a baby and predict that small squalling bundle’s life. But it’s safe to say that no one could have looked at the young Abraham Foxman — a Jewish child born 81 years ago this month into Jew-loathing Poland just before World War II, saved by his prescient parents and brave, loving Catholic nanny — and guess that he’d ended up feted by the U.S. Congress.

Last Friday, May 21, Mr. Foxman, who lives in Bergen County, was honored as Congress marked American Jewish History Month. This year, of course, the presentation was online; as everyone has learned, that reality comes with advantages as well as restrictions. The ceremony, opened by Samantha Powers, the human rights advocate and former U.S. representative to the United Nations and now the administrator for the United States Agency for International Development, included cameos as well as slightly longer talks by more than 20 senators, members of Congress, and other officials. They included Democrats and Republicans, Jews and non-Jews; the speakers were diverse in their backgrounds but unified in their praise for Mr. Foxman, whom they all seemed genuinely to know.

Just about all of them — the senators, New York’s Chuck Schumer, who holds the highest position any Jew has ever held in the American government, New Jersey’s Cory Booker, Oregon’s Ron Wyden, Nevada’s Jacky Rosen, Connecticut’s Richard Blumenthal, Ohio’s Rob Portman, and Montana’s Steve Daines, the members of Congress, a very long list, too long to spell out, that notably includes South Carolina’s James Clyburn, Maryland’s Jaimie Raskin, and New York’s Jerry Nadler; and some notable others, such as Susan Rice, the political advisor who’s now the director of the United States Domestic Policy Council, and Rabbi Shalom Baum, who leads Keter Torah in Teaneck and introduced himself as Mr. Foxman’s rabbi — know Mr. Foxman. They all talked about how his relentless fight against bigotry and hatred is fueled by his endless optimism, his very real belief in the positive arc of history.

“Combatting the evils of anti-Semitism and hatred requires constant vigilance,” Ms. Rice said. “Abe has done righteous battle against them. His tenacity and bluntness are legendary, and so are his loyalty and kindness. And his legendary advocacy extends beyond his immediately community.

“I am just sorry that this virtual event has deprived me of one of his legendary hugs.”

Ms. Powers also talked about Mr. Foxman’s intensity, his dogged devotion to the fight against the hatred that demolished the world of his childhood, his willingness to follow that fight wherever it leads, including into occasional verbal battles with everyone, old and new friends alike, and how the love that underlies those tussles always surfaces.

They really know him.

In his acceptance talk, which was taped before the fighting between Israel and Hamas in Gaza, and before the rise in anti-Semitism that seems connected to news of that fight, Mr. Foxman talks about how lucky he’s been throughout his life, and how grateful he is to the country that took him in and allowed that luck — abetted, of course, by the brains and hard work that he did not mention — to flourish.

He did have some warnings, however.

He went on to talk about the power of words. “The power of life and death is in the tongue,” he said; he quoted the prayer that’s said in every minyan, the plea to “keep my mouth from speaking evil.” “That’s because words can kill, and they also can heal,” he said. “And I believe that we can change people’s minds and hearts.”

In a phone conversation on the Monday after the celebration, Mr. Foxman was less sanguine, heart-bruised by the last week.

“Israel was under attack, and most of the world, with the exception of America, was silent,” he said. “The United Nations Security Council tried five or six times to come together to condemn Israel, and the United States, thank God, prevented it.

“You can count on the fingers of one hand the countries that stood by Israel. Ironically, they are Germany, Austria, and Hungary. That’s pretty sad in terms of history and perspective.

“The media turned against Israel, in a horrific manner that we haven’t seen since 2014,” he continued. “We’d hoped that things had changed, but they haven’t. The New York Times has been horrific; people who I respect and admire, who are my friends, are so blinded by this. And they are very smart people.”

Other media outlets also have been one-sided in their coverage, he said; the overall refusal to mention all the missiles lobbed at Israel, and the effect on Israelis, is wrong and dangerous. “It’s not been a great week for the Jews,” he repeated.

“And something else has been happening on the streets of America, and it’s very scary,” Mr. Foxman continued. That’s not new this week, but these last few years. “We’ve seen it in Europe for hundreds of years, anti-Semitic mobs singling out Jews, but we’ve not witnessed it in this country since Leo Frank was killed for being a Jew” — he was lynched in 2015 for the murder of Mary Phagan, which he had not done — “but in 2019 and 2020, with the attacks in Pittsburgh, in Poway, in Jersey City, we saw Jews being singled out.

“And this week we saw Jews being chased as Jews and beaten for their support of Israel in the streets of Los Angeles, New York, Skokie, Tucson, Salt Lake City — there is something brewing in our country.”

This is not what Abraham Optimism Foxman usually says, although he’s been trending in this direction for the last few years, but his lack of optimism here is startling.

What can we do?

“We need to protect ourselves,” Mr. Foxman said. “I see that more Jews are beginning to remove their kippot.” This is not a recommendation, just a description. “African Americans and Asian Americans can’t hide their identities. Jews can. Jews began to wear their kippot proudly, and all of a sudden they are beginning to remove them. This is scary.”

“And we need to challenge the powers that be to speak out, to condemn the violence, to embrace the victims, whoever they are, of whatever color they are. We need to make sure that hate crimes are seen as a very serious offense against society. They need to see that there are consequences.

“We need to look wisely at who is running to represent us, at what their values are, at what they believe in. Too frequently, people have been elected who advocate hate.”

And then there’s social media. It’s a complicated matter, balancing free speech against hate speech that legitimizes people’s worst impulses and helps haters find each other. “I am against censorship, and I know how difficult it is to balance freedom of speech against civility, but we need to look at it with brand-new eyes,” Mr. Foxman said.

“Look at what technology has done for us during the pandemic. There are Zoom classes and meetings and prayer services; there are also platforms for bigotry and hate. We have to find a balance — the less civility there is, the more violence in the streets.”

Despite all that, Mr. Foxman celebrated his birthday, in the week that he was feted for his enormous contributions to American, Jewish, and American Jewish life, with great pleasure. Optimism still is at the heart of his being, and he still has hope.