In all my 74 years, I never thought or daydreamed about how I would look or feel as a grandmother walking down the aisle at a grandchild’s wedding.

Certainly as a teenager, I imagined myself quite often as the bride, floating toward that imaginary Prince Charming waiting for me under the chuppah. And I definitely dreamt the dream of the mother who — at the right time — would escort her beloved children down a similar aisle to their own waiting prince or princess. But a grandchild? I guess I’ve been preoccupied, so to speak, just savoring time with my grandchildren, playing, laughing, sharing, shopping, traveling, or simply soaking up the warm light produced by the sheer pleasure of being by their side. It would appear that I forgot that they also grow up; that next chapter after teenager time, when they would be called adults, actually never occurred to me.

So when my Israeli grandson Raanan became engaged this past summer to his beloved Rivka, I was a bit dumbfounded. So much for the wise and astute grandmother. Never mind that he and his fiancée have been together for a good number of years. Never mind that I know her and have come to love her, and that the entire family knew that someday it would be a done deal. And the irony here is that when the engagement led to my finally picturing that “grandmother walking down the aisle” scene, that moment actually never happened at all.

The “grandmother celebrating the grandchild’s wedding” scene, however, did occur; and it was more joyous, filled with more laughter, more full of simcha than I could have ever imagined.

Four of Raanan’s grandparents successfully braved the challenge of documents and paperwork and covid PCR tests and serological tests and quarantines and the stressful wait for that glorious, treasured permission email from Israel that allowed us into the country. No grandparent was alive at my wedding, so four in one shot seemed quite special to me, and worth whatever it took for us to be there. We were a happy, “enjoying time together” unit, brought together almost 30 years ago by our children’s marriage: my son-in-law Mark’s mother and stepfather, Mark’s father (whose wife regrettably could not join us), and me. And while we are quite different from each other in many ways, when it comes to our shared family, we are of one ilk. In the 24 hours leading up to the Sunday evening wedding, while everyone around us was preoccupied with last-minute arrangements, stresses, dresses, place cards, and so on, we did what we grandparents do best: kept ourselves busy as a group, kept our opinions to ourselves, and absolutely stayed out of the way. 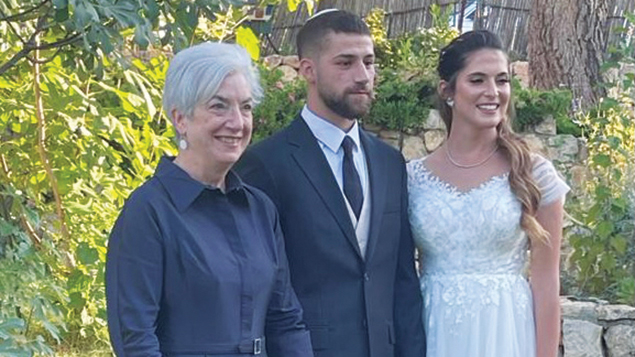 Tzivia Bieler with the bride and groom.

On Saturday night, the four of us stayed busy as we sat together at my daughter’s dining room table and played one of our favorite games — Rummikub — and I’m not talking just one round. Once the ground rules were set — because of course senior citizens always have specific ground rules — we were in high gear. We must have played six or seven rounds. Some say the game is good for the brain and therefore beneficial for us, but our love of this game has little to do with our brains and much to do with our hearts. We’ve played it for so many years with our children and grandchildren, and that makes it special. I chuckled a bit when I googled the game and discovered that when it was originally released, it was known as the child of Rummy. And so its original name was Rummikid. Appropriate, yes? Only in the 1970s did the name get changed to Rummikub. I have no idea why.

On Sunday morning, the four of us needed to take a rapid PCR test, which was required if we were to be admitted into our grandson’s wedding. While it seemed a bit preposterous that we grandparents would be denied entrance, rules are rules, and so we climbed into my son-in-law’s car and drove together about 35 minutes to the Hatzalah Center in Ramat Beit Shemesh. Now the back road between Neve Daniel and Ramat Beit Shemesh is one of my least favorite roads; actually, I hate it, and I am a terrified, gasping passenger. The road is one lane in each direction, high up on hills that have winding “please do not let me fall off the edge” curves. The grandfather at the wheel wasn’t bothered in the least by this route, which necessitated my keeping my eyes closed for most of the ride.

Thank God, and I say that with a powerful sense of relief, we arrived safely.

Once inside, we completed the forms, tolerated sticks swirling up our noses yet again, and waiting for our test results. But I absolutely had to share with everyone else in the room how the four of us were related and why we were there. You simply do not prepare for your first grandchild’s wedding without letting everyone around you know how special this time is! And it’s Israel, right? So there was much chatting and smiles behind masks and mazal tovs and good wishes all around. I loved it! We walked out covid negative and joyfully positive. It was a perfect beginning to the day.

Next on our schedule was filling up the gas tank on the return trip. Of course, you realize that we are quite spoiled here in New Jersey. Although I still bemoan the loss of days when the gas attendant would clean my windshield without my even asking, I do appreciate the fact that there is NO, absolutely NO, self-serve in my state. Not so in the State of Israel. So while I sat in the back seat and observed, all three of the other grandparents got out of the car and conferred on the process of filling the tank and paying. A few minutes of discussion ensued. No clarity yet. What in the world needs to be punched in so that the gas comes out? License plate number? Maybe. Israeli identification number? Not possible for non-Israelis. Cell phone? Why? Passport number? A possibility. Mark’s father was the only one in the group with an Israeli passport; that seemed the best option — and voila, the code was broken! Passport number and license plate then entered, gasoline selected, mission finally accomplished, and everyone climbed back into the car. I could write about this day, I thought to myself. 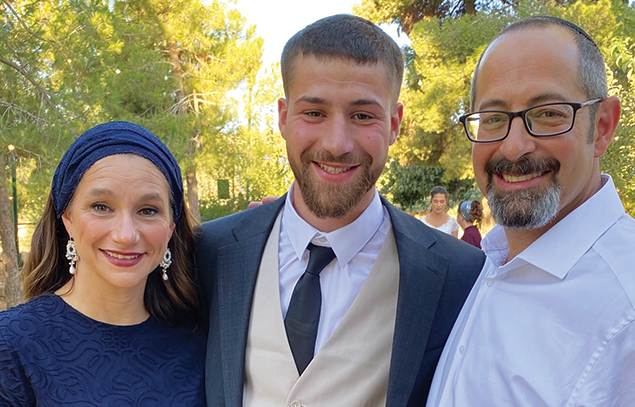 Tzivia’s daughter and son-in-law, Lara and Mark Kwalbrun, with their son, Raanan, aka the groom.

And finally, how do I adequately describe the flavor of the wedding? We gathered outside in the settlement of Bat Ayin, high on a hilltop in the Judean Hills south of Jerusalem. I say without hesitation that everyone looked beautiful, and simcha filled the air. Beyond that, formality as we know it in the United States was thrown to the winds. No dresses matched in style or color, Raanan’s sisters wore flat sandals for easy dancing, and while the chatan (groom) wore a suit for the first time in his life, his three brothers wore open-collared shirts without jackets. The kallah (bride) was quite beautiful in a simple gown as she sat outside on a wooden swinging bench with the view of the hills behind her, while my grandson came to place the veil over her face. There were no flowers in her hands then, just a tambourine inscribed with a special prayer that the bride recites on her wedding day.

The serious music turned to joyful rocking as the family danced Raanan away. And with very little decorum or planning, everyone then rushed toward the chairs and the simply decorated chuppah that was adorned mostly with the view and the setting sun behind it. All of us scrambled to get a good seat: little children plopped down right on the ground in order to have a perfect view up front and center; Raanan, my daughter Lara, and her husband Mark simply stepped up onto the chuppah; and the only ones who actually walked down the aisle were the beaming bride and her parents, led by the same loud, joyful group of singing men accompanying them forward just as they accompanied Raanan away from his veiled bride a few minutes earlier.

In the midst of hugs and kisses when the ceremony concluded, I went over to Rivka’s 90-year-old grandmother — her Savta — who was sitting in her wheelchair, and in my best Hebrew, because I knew she did not speak English, I told her that I was Raanan’s grandmother and I gave her a big mazal tov. She took my hands in hers and I understood her Hebrew with no difficulty whatsoever. “Now we are family,” she said with enormous joy, and we hugged each other warmly.

In the end, I didn’t miss walking down the aisle. My dream became a reality simply because I was there, sharing the gift of my grandson’s wedding in the hills of Bat Ayin, whose very name is a prayer we would ask for the young couple: “Guard me like the pupil of Your eye (bat ayin); shelter me in the shadow of Your wings.” (Tehillim 17:8)

When I think about Raanan and Rivka two months later, I return to the thrill of their wedding and imagine all the wonderful blessings of joy and peacefulness and love and companionship that are associated with the chatan and kallah. And I know the other lucky grandparents join me in praying that the couple’s life together will always be blessed with a song of love so remarkable and so musical that, as we are reminded, it will be heard in the “cities of Judah and the streets of Jerusalem.”

Tzivia Bieler and her late husband, Bruno, moved to Teaneck in January 1974. She retired three years ago as the executive office director of the American Jewish Joint Distribution Committee. Retirement brings her pleasure, and more time to spend with children and grandchildren in United States and Israel.