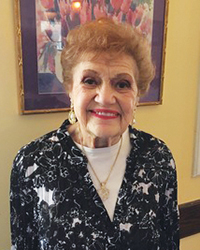 Frieda Goldman (Lanzner), 95, of Mountainside died April 9, 2020. She was born and raised in Newark, and continued to reside there before moving to Springfield in 1958. She moved to Union in 2005 and relocated to Mountainside in 2018.

Mrs. Goldman was a businesswoman who managed her parents’ bridal shop, Lanzner’s, located on Springfield Avenue in Newark before its closing in 1967. She subsequently worked as a salesperson at Lord & Taylor and Saks Fifth Avenue; she also had a candy-distribution business and worked briefly in the Registrar’s Office at Kean University.

She graduated from Weequahic High School in Newark.

She enjoyed making crafts with a variety of media, including beaded flowers, decoupage, sand sculptures, as well as creating jewelry.

A lifelong member of Hadassah, she was an active fundraiser for B’nai B’rith and supported Jewish War Veterans. At her final home, Arbor Terrace Assisted Living in Mountainside, she was involved with a variety of activities and was nicknamed “The Mayor.”

Predeceased in 2010 by her husband, Alex, whom she married in 1947, she is survived by her son, Wayne; her daughter, Robyn Goldman Rajs (partner Toufic Hakim); a sister, Harriet Ribotsky of Miami; and a granddaughter.

Memorial contributions may be made to Foundation for Self Leadership, a nonprofit dedicated to promoting mental health and emotional well-being, P.O. Box 873, Union, N.J. 07083.