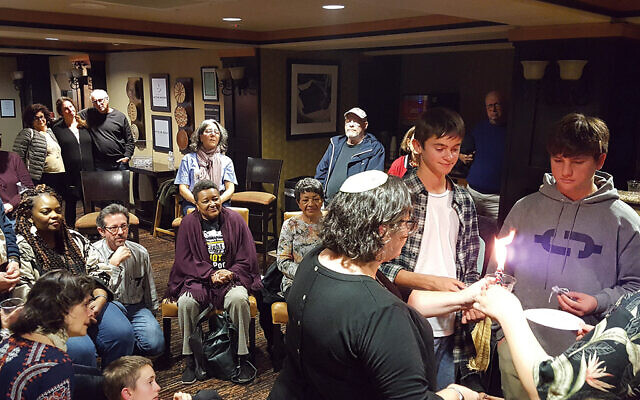 A Havdalah service with guests from the Alabama coordinating committee for the Poor People’s Campaign.

This fall, members of Bnai Keshet in Montclair explored the roots of and resistance to American slavery and bigotry and remembrance of its victims. From Nov. 7 to 10 they visited Montgomery, Ala., where a group led by civil rights lawyer Bryan Stevenson created the Equal Justice Initiative (EJI), The Legacy Museum: From Enslavement to Mass Incarceration, and the National Memorial for Peace and Justice, dedicated to the African-American victims of mob attacks and lynchings.

The 43 adults and teens spent much of the last year preparing for the trip by studying; reading Jewish writings on slavery, mass incarceration, and the role of Jews in Southern slavery; and hearing guest speakers, including Tanya Coke, director of the Ford Foundation’s gender, racial, and ethnic justice team, and EJI deputy director Randy Susskind.

Bnai Keshet member Yael Silverberg-Urian wrote that the visit to Montgomery “energized and motivated” the participants, who, she said, completed the visit “believing in the power of learning from these profound, heart-opening spaces.”

In Montgomery, said Silverberg-Urian, Rabbi Ariann Weitzman, Bnai Keshet’s associate rabbi, reminded the group to “center our experience through a Jewish lens, examine the legacy of slavery in our texts, and promote the work of turning history into communal memory.”

Guide Michelle Browder outlined Alabama’s history as the “cradle of the Confederacy” and where the Civil Rights movement began. She introduced the visitors to her father, Curtis, who was the first African-American chaplain appointed to serve Alabama’s prison system more than 40 years ago. She also talked about her aunt Aurelia Browder, the first named plaintiff in Browder vs. Gayle, a 1956 federal appeals ruling that declared segregated public busing unconstitutional.

“Michelle and her father spoke about the bridge between slavery and present-day mass incarceration of men and women of color with penetrating truth,” Silverberg-Urian said.

The 81st anniversary of Kristallnacht — the Nov. 9-10, 1938, pogrom widely regarded as the beginning of the Holocaust — fell during the visit and, said Silverberg-Urian, provided a fitting context for viewing EJI’s museum and memorial, which features first-person accounts of slavery, lynching, and racial segregation across generations. The experience, she said, conveyed the “terror and dehumanization from slavery, reconstruction, Jim Crow, and mass incarceration.”

At the memorial, which consists of hundreds of six-foot monuments symbolizing victims, the Bnai Keshet group recited the Mourner’s Kaddish. The visitors also engaged in conversation with three women from the Alabama Poor People’s Campaign: A National Call for Moral Revival.