What should be done for someone who saves a life?

In the Book of Esther, Mordechai is led through the streets of Shushan, riding the king’s steed and wearing royal garb, to demonstrate the king’s gratitude for saving his life.

This particular variation of a thank-you note was thought up by Haman, whose other ideas in the Book of Esther might indicate that he is not the best authority on doing what’s right.

So when contemplating what the Jewish people should do for those non-Jews who saved Jewish lives during the Holocaust, risking their own to do so, the biblical precedent wasn’t particularly helpful.

One answer was the one that Yad Vashem, Israel’s Holocaust memorial and museum, reached. In 1963 it set out to honor the rescuers as the “Righteous Among the Nations,” and set up a commission to examine each case. Those recognized receive a medal and a certificate of honor and their names are marked on plaques in the Garden of the Righteous Among the Nations at Yad Vashem’s Jerusalem grounds.

But a quarter of a century later, Rabbi Harold Schulweis, the prominent Conservative rabbi who led Valley Beth Shalom in Encino, California, set out to provide a more concrete form of honor. The Iron Curtain was coming down, and so Poland, home to the largest number of Yad Vashem-recognized rescuers, was no longer cut off from the West. Rabbi Schulweis organized what became the Jewish Foundation for the Righteous, now based in West Orange, to provide material support to the rescuers.

As Stanlee Stahl, the foundation’s executive vice president, puts it: “Rabbi Schulweis said that the Jewish people have a double memory: of indescribable evil, the murder of six million women and children and men, and of blessed righteousness, the precious few who said, ‘Not on my watch,’ and it’s incumbent on the Jewish community to remember both.”

In its early years, the foundation funded 1,850 rescuers in 34 countries — and had a waiting list.

But now, more than 75 years after the end of the Nazi regime, “they’re passing on like our beloved Holocaust survivors,” Ms. Stahl said.

All told, the foundation provided more than $42 million to a total of 2,500 rescuers since its founding. 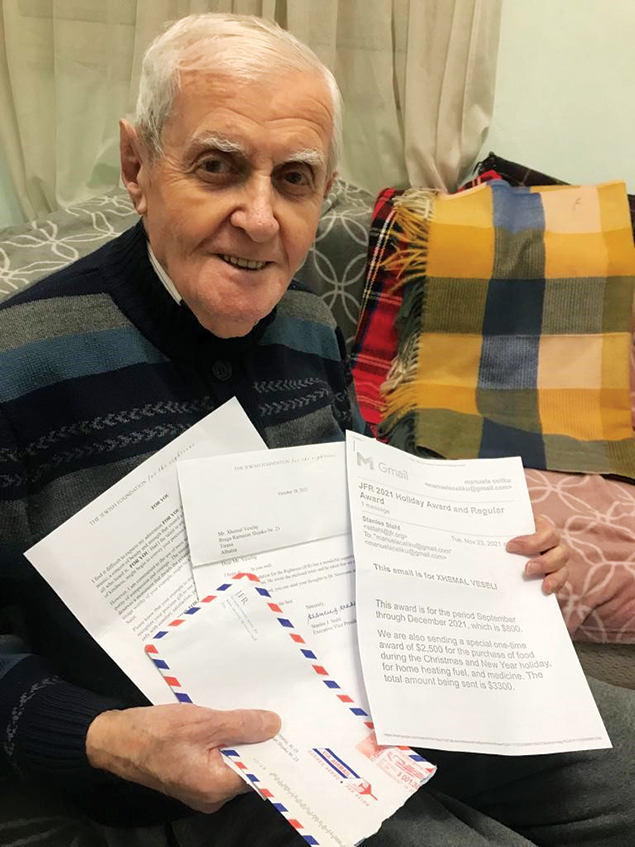 This year, three rescuers died after receiving the Christmas gift. Before that, six died of covid; another 33 died, essentially, from old age.

The money makes a big difference to the rescuers, particularly for the vast majority who live in what used to be the Eastern Bloc, under direct or indirect Soviet rule.

In Albania, a typical state pension is $28. “We’re not just doubling their pension,” Ms. Stahl said. “This makes a difference.”

She gets gratitude in return. Recipients send her photographs — “some take a picture of a table filled with food they just bought” — and letters; at this time of year, many offer Christmas greetings.

All but a handful of the rescuers are Christian.

One of the exceptions is Xhemal Veseli, an Albanian Muslim.

Xhemal, now 92, was 14 in September 1943, when his older brother, Refik, asked their parents to shelter a Jewish family in their home in the village of Kruja after the Germans invaded.

Refik had moved to the Albanian capital, Tirana, where he worked as an apprentice in a photography studio. There he met Moses Mandil. Mr. Mandil, his wife Gabriela, and their two children, Gavra and Irena, had fled their home in Yugoslavia when the Germans invaded. They found their way to the Italian-occupied province of Kosovo. Imprisoned by the Italians, Mr. Mandil charmed his captors with his photographic skills and was allowed to escape with his family to Albania, also under Italian control at that time.

Not long after, the Veselis rescued a second Jewish family, the Ben Josephs, from Tirana. For nearly a year, until liberation in October 1944, the Veselis sheltered the seven people of the two families in a small room above their barn. The adults remained hidden the whole time; the two Mandil children dressed in local Muslim garb and moved freely around the village.

After the war, the Mandils returned to Yugoslavia, and in 1946 Refik joined them to apprentice as a photographer. The Mandils emigrated to Israel in 1948; Refik opened a Kodak studio in Tirana. He died in 2000.

Appropriately for an organization devoted to honoring the life-changing actions of individuals, the Jewish Foundation for the Righteous is funded by individual donors. Before covid, it would hold fundraising events at the Waldorf Astoria in Manhattan and later at the New York Public Library. Since then, it has relied on three direct mail solicitations at Pesach, Rosh Hashanah, and Chanukah, as well as grant requests to small family foundations.

Ms. Stahl appreciated the connection to the Jewish community these solicitations bring her.

“I write the letters, I tell the story, and then you see the generosity of clal Yisrael,” the Jewish people, she said.

“People write us notes, and it’s very sweet. They might say it’s for their mother’s yahrzeit. We just received a letter from a soldier who was a captain on D-Day. He sent a picture of himself in uniform, along with two $10 bills. It renews your faith in the Jewish tradition of tzedakah.”

Ms. Stahl said that unlike Jewish Holocaust survivors, “who go and teach in schools, no one has really asked the rescuers to talk to students about what they did.”

But they are proud of what they did.

Until the pandemic, Ms. Stahl regularly traveled to Eastern Europe, where she met with some of the rescuers she helped. When she visited them, they would point with pride to the medal they received from Yad Vashem, with their name on it, and to the certificate of honorary Israeli citizenship that came with it.

“Israel does a good thing,” Ms. Stahl said. “They recognize their heroism. And we provide funding until the rescuer passes away.”