Deborah Veach has a resume that would appeal to any Jewish organizational board.

A retired lawyer and former Teaneck municipal prosecutor, she also served on the Teaneck town council for a half a dozen years, starting in 2000.

But the resume doesn’t show her connection to the YIVO Institute for Jewish Research, the educational and cultural organization that was formed in 1925 in Vilnius as the Yidisher Visnshaftlekher Institut (that’s Yiddish for Jewish Scientific Institute) and relocated to New York during the Holocaust – and whose board of directors Ms. Veach recently joined.

That connection goes back to her birth in 1949 in a displaced persons camp in Foerenwald, Germany, 20 miles south of Munich.

“Yiddish is my first language,” she said.

Her mother, Rae Zuckerman, was from Horodok, and her father, Meyer Lifschitz, was from Ivenetz, towns 200 miles apart in what then was Poland and now is Belarus. Both were active in the Beitar Zionist youth group before the war, and because of Beitar they had heard of each other’s families. When the Germans invaded Poland, Meyer and a friend bicycled into Russia; he spent the war years in a labor camp in Siberia. Rae hid in the woods as a partisan.

After the war, Meyer ended up in the same DP camp as Rae’s aunt, at Ulm, 100 miles from Foerenwald. The aunt made an introduction, and Meyer and Rae clicked. When they got married, Meyer moved to Foerenwald.

When Deborah was nine months old, the family was able to move to America. This was in March of 1950. 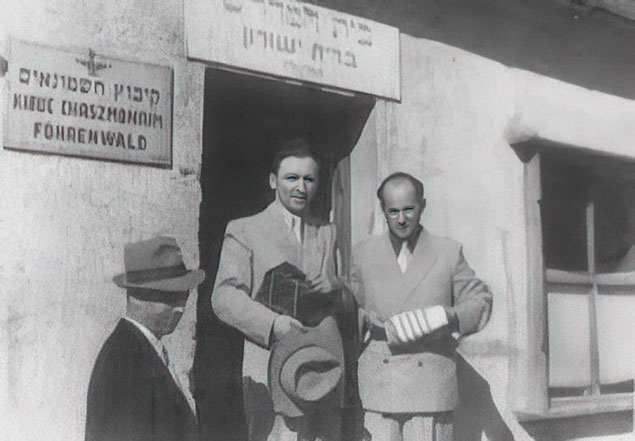 Deborah Veach’s father, Meyer Lifschitz, is on the left of this photograph taken at the Foerenwald
DP Camp.

“That’s the exact age of my granddaughter,” Ms. Veach said. “It really hits home when I see what a nine-month-old is like.”

The family settled in Bayonne. “My mother’s sister was there, and her husband was distantly related to the people who owned Maidenform, whose factory was there,” she said. Deborah’s uncle worked in the factory and soon her father did too.

Ms. Veach recalls growing up in Bayonne in the 1950s as “somewhat difficult. We were assigned to a school that had very few Jews. We were in a Polish neighborhood and we were subject to anti-Semitic name-calling.

“Initially school was very difficult for me because of my lack of English language skills. I remember not understanding everything in kindergarten.”

Her parents spoke Yiddish to her — and to her sister, Jeanette, who is five years younger — throughout their life.

“At some point I switched from Yiddish to English and answered them in English, but I have no recollection of when that happened,” she said.

She took her first formal Yiddish class when she spent her junior year abroad at Hebrew University. “I had an aunt and uncle in Israel and they didn’t know Hebrew,” she said. “I figured I better learn some more Yiddish.” 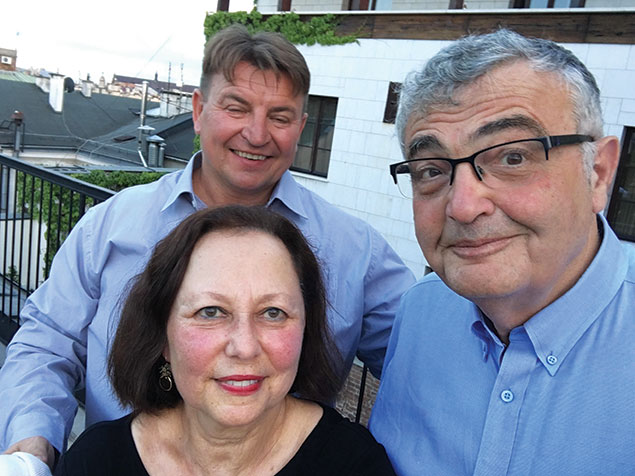 Deborah Veach in Krakow with YIVO in 2016. She is flanked by Dariusz,a Polish guide, and Professor Sam Kassow of Trinity College, who was scholar-in residence on the trip.

Ms. Veach first encountered YIVO when she lived in Manhattan, not far from YIVO’s offices, which then were at 86th Street and Fifth Avenue. She was taking a course in Yiddish folklore at Columbia and would go to the YIVO library to study.

Then she went to Eastern Europe with YIVO twice. In 2016 the trip went to Lithuania and Poland, and in 2019 it went to Ukraine. Both times, the program focused on sites related to Yiddish literature.

Before joining the YIVO trip to Lithuania and Poland, she and her family — her husband, James Veach; their son, Zachary; her sister, Jeanette Heistein; and her brother-in-law, Martin Heistein — spent 10 days in Belarus on their own heritage tour.

“We went to every single place that touched my parents’ lives,” Ms. Veach said. “I went through every scrap of paper I had from their past and put together an itinerary that included about 15 shetlach,” towns. “We went to each and every one of them, including where my mother and my aunt were in a labor camp. We specifically went to the railroad there because they had worked on constructing the railroad. We went to a town where my aunt had a job as an accountant.”

One movie of pre-War Horodok has surfaced. Someone who had left the town returned for a visit in 1930. He came back with some wealth — he drove the first car the town had seen — and a movie camera. Ms. Veach had first seen that short film as part of the Jewish Museum’s 1976 exhibit, “Image Before My Eyes: A Photographic History of Jewish Life in Poland Before the Holocaust,” which drew from YIVO’s collection. Now, preparing for her own  visit to Horodok, she found the film online — and when she got to Horodok, she found that it still looks now much as it had looked them.

She found Horodok “frozen in time,” she said. “There were cars, but there were also horse-drawn wagons. It’s still very primitive. In some places there are no toilets, just holes in the ground.”

And there were no Jews. In Ivenetz, her father’s hometown, “we found the last remaining Jewish person.” But her group couldn’t communicate with her. “She had already forgotten how to speak Yiddish.”