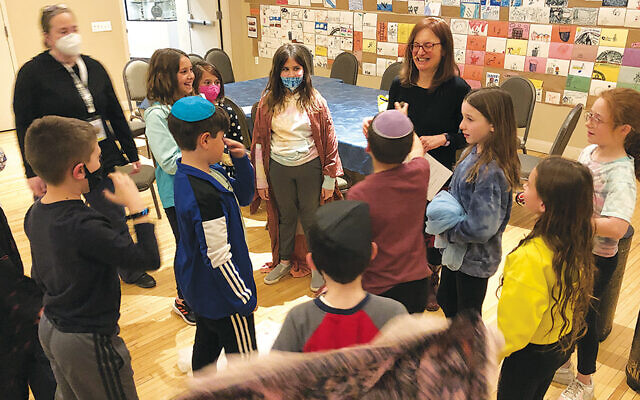 Some clichés are perfect for some situations.

The pandemic that has eaten up the last two years and some months of our lives — that’s a quick recap for anyone literally born yesterday — has forced organizations to rethink the standard ways they do business. Sometimes, though, the right verb isn’t “to force.” It’s “to allow.”

To revert to cliché, the pandemic at times has allowed people and groups to take nasty squished lemons and make refreshing, brightly colored lemonade.

The lemonade-making groups include the religious school at Congregation Ohr Shalom/The Summit Jewish Community Center. The year away from in-school classes allowed the synagogue’s leaders to reconsider how to teach afternoon classes.

Cantor Janet Roth has been at Ohr Shalom since 1991; she’s watched many changes occur and she’s overseen many of them herself. She’s taught at the Jewish Learning Center, as the shul’s Hebrew school is called, for many years, as well as in the shul’s nursery school, and her role has changed as times and technology and expectations have changed.

Now, she’s teaching Torah in Motion. She and a co-teacher, Alisen Herman, an arts specialist, have created the program, where children can discuss the Torah portion, act it out, draw scenes from its stories, and hang those drawings on the shul’s social hall’s walls.

As the school year started, Cantor Roth’s goal was to teach parashat hashavuah, the weekly Torah portion. The class — about 29 third- and fourth-graders — started out that way. “But there are so many stories in each parashah, and I couldn’t bear to have the kids miss out on them,” she said. “At some point in the year, I decided that I was not going to be in such a rush. The Torah will be here forever. I didn’t want them to miss out on any of it.”

So she decided to keep going through the Torah, but to take as much time as each parashah, or even each group of verses, or perhaps each verse, demanded.

“And I also wanted to do something with drama, so we brought Alisen in,” she said. “I knew that I wanted to combine drama and art. So we sat and talked, and we both mentioned different ideas, and finally Alisen said, ‘ Let’s make a pictorial Torah.’”

The JLC doesn’t divide its students by grades, Cantor Roth said; they’re often together for tefillot, and sometimes they’re split into different configurations. By putting the third- and fourth-graders together — students who are old enough to understand what the Torah stories are about, and young enough not to try to be cool about it — she had a good group to start with.

The weekly class starts by reading the Torah; they’re up to Parashat Yitro, just about halfway through the book of Exodus, now. “I want them not just to read the stories and to talk about them,” Cantor Roth said. “I want them to feel the stories. I want them to live them, and to have them within themselves.”

The class has developed organically. “By now, we have a pretty good routine,” Cantor Roth said. “We have a huge social hall. They come in and sit on the floor. I remind them where we were in the Torah last week, and then I pick the story I want to do and we study it, and make it happen on the spot.

Then the drama begins. “I grab someone up to be Moses. Often, I have a little problem. Everyone says, ‘I want to be Moses!’ ‘I want to be Moses!’ ‘No, I want to be Moses!’” But she picks one kid to be Moses, and another to be, say, Jethro, his father-in-law. “And then they stand up, and I tell them what’s going on in the story, and what to say. I say to the kid who’s Yitro, ‘Tell Moses it’s too much for one guy to do.’ And the kid either will repeat what I said or will embellish it.”

(Parashat Yitro contains many stories, including one that’s central to the Torah, and to the story of the Jewish people — the revelation at Sinai. But it starts with Moshe’s father-in-law, Yitro — in English, that’s Moses and Jethro — telling Moshe that the job of judge of all the Israelites is too big for any one man, even if that man is Moshe.)

Back at the Summit Jewish Center, “And then I say, ‘Moses, you’ll find some judges,’” Cantor Roth continued. “And then I’ll grab some judges. And I divide the rest into two groups. One group talks about big problems — I lost my job, or I ran out of food, or my neighbor stole something from me — and the other group talks about little problems — perhaps “I’m so tired of manna!” or “My feet hurt! It’s so hard to get good walking shoes in the desert!”

“It gets a little wild sometimes. If the Israelites are wandering, they want to wander,” and as Cantor Roth already said, the social hall is big, and it has doorways that lead to other parts of the building.

“It’s so much fun. They’re having fun. And they’re learning.

“And then, when we get to a certain part in the story, I say that we’ll stop here, and they know that it’s time to go to the tables, where we have half sheets of construction paper and markers. And then Alisen says, ‘Now get a picture in your mind of what you want to draw from the story.’

“Alisen has taught them how to imagine what they’ve talked about, how to put a picture in their minds and bring it to actualization. Some draw one picture, some draw two, some work together, some just play with the markers. And then she collects them, sorts them, puts them in the right order,” and there’s a story. And then she hangs them on the wall.

There are some Torah stories that are not for the squeamish. Cantor Roth doesn’t hesitate to tell stories of animal sacrifice. But there are some that she skips, she acknowledges; so far, she’s discussed neither Abraham’s attempted disposal of Hagar and Ishmael, the son he had with his slave, nor his aborted sacrifice of Isaac. “I chose to leave those out,” she said.

She does like teaching about Jewish values; when the class studied the Torah portion describing Abraham welcoming the strangers he did not know were God’s emissaries, in which he embodies the concept of hachnasat orchim — welcoming strangers — by offering them food, “I taught them a song about it, and I wrote up the story and the significance of it. I gave out pound cake, and at the end of that day, we decided to give some pound cake to everyone at the school.”

Not only does the synagogue l have the children’s Torah growing on the walls of its social hall, , it also has commissioned a soferet — a scribe named Linda Koppleson, who also is a shul member — to write a sefer Torah.

“Postpandemic thinking is thinking out of the box,” Cantor Roth said. “I don’t want to make the kids sit still any more. What used to be special is mainstream now. Drama and art have become mainstream. No one is just sitting and staring at a book.” Or staring at a screen, she added.

“When you think of all that time they spent last year, staring at a screen! My philosophy is that when you have students live, it should be live.

“When you give them the freedom, they will run with it. They are living the Torah. It is in their kishkes,” their insides. “It is in their neshamas,” their souls. “They can go up and see the pictorial Torah on the walls. They look at it and say, ‘I did that one!’ They can show their parents.

“And they remember the stories.”