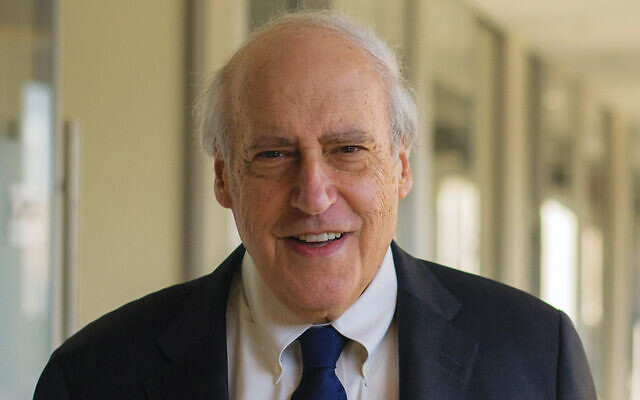 Dan Glickman does a lot of things that it’s hard to imagine a politician running for office today could do.

He talks about bipartisanship. He advocates moderation. He prizes humor, particularly the self-deprecating variety, and urges that politicians nurture it in themselves. He’s big on humility too. (He will be talking about all that, and more, on Zoom for the Kaplen JCC on the Palisades in Tenafly; see box for details.)

Oh, and he also talks often about being Jewish. Not about religious observance, but as a firm, joyous, and inescapable part of his identity.

None of this seems likely to get a politician elected now, but Mr. Glickman, a Democrat, was a nine-term member of Congress. From, of all places, Kansas. After that, he was President Bill Clinton’s secretary of agriculture; the first and so far the only Jew to hold that position. He reports on often being introduced, by the president, as “the Jewish secretary of agriculture.” (As if the Lutheran secreetary was off on another assignment.)

Mr. Glickman’s career has been studded with other impressive positions; as his biography tells us, the 77-year-old retired politician also is a former vice president of the Aspen Institute, a senior fellow at the Bipartisan Policy Center, and a board member of the World Food Program USA. For six years, he did something entirely different — from 2004 to 2010, he was chair of the Motion Picture Association of America.

He’s now a memoirist as well, touring, at least virtually, to talk about his book, “Laughing at Myself: My Education in Congress, On the Farm, and At the Movies.”

The book positions Mr. Glickman as a third-generation Wichitan; his grandparents emigrated from Eastern Europe, but instead of stopping on the East Coast, they trekked all the way to the heart of the Midwest. They flourished there; although Mr. Glickman does not emphasize his family’s success — that would be bragging, which wouldn’t be nice — they did own a Triple A baseball team, the Wichita Aeros. (As Mr. Glickman explains in his book, Wichita was no backwater; instead, it was a hub of innovation, and central to the airplane industry.)

“The book is my autobiography; it’s about a Jewish kid growing up in Kansas, and how I got to be a congressman,” Mr. Glickman said. “It weaves my life story, with a lot about my family life, with commentary on the American political scene.

“The underlying premise is that we all have become humorless, and the lack of humor among leaders and institutions, even faith-based institutions, has become toxic.

“Humor is a superpower when it comes to getting along with others, and it’s helped me in my life.”

“It’s not a weakness, but a strength, to be able to make fun of yourself appropriately.”

In his book, Mr. Glickman tells the story of how he once was the government’s designated survivor at a State of the Union address. That means that he was the cabinet member who was not allowed anywhere near the Capitol as the Senate and the Congress sat together to listen to the talk. He was safely ensconced at an undisclosed location, protected by a phalanx of very serious Secret Service agents and shadowed by the nuclear football (which actually is a briefcase).

He was allowed to pick his own secret location; it was his daughter’s apartment in downtown Manhattan. He was escorted there with so much security that if the apartment had mice or roaches, their parentage and contacts would have been ferreted out. And then, when Clinton’s characteristically long speech was over and the audience dispersed, the agents left. They no longer had any interest in him. So Mr. Glickman and his daughter went out to pick up a take-out dinner; it had started to rain, it was freezing out, and precisely because it had started to rain and it was freezing out there were no cabs, and the two had to trudge back home with their dinners rapidly cooling in their Styrofoam. “I was almost the leader of the free world, and now I can’t even get a cab.” Sic transit gloria mundi.

Being Jewish in Kansas is very different than it is in New Jersey or New York, Mr. Glickman said. He made being Jewish central to his book, as it is central to his life, because “you pick where your strengths are. There are many Jewish politicians, but very few of them are from rural areas, small towns, or farm country. Many of the people I met had never met a Jewish person before. It’s not as if when I would go into farm country there were a lot of synagogues along the way. So in some sense, I looked at myself as an ambassador for the Jewish people.

“Wichita was not a tiny place; it had about 300,000 people, but it was a small Jewish community,” Mr. Glickman said, remembering the town he grew up in. “It had about 300 families, and two synagogues. One of them was Orthodox, sort of Conservative” — the classic midcentury Conservadox shul — “and one was Reform.” In his book, he wrote that his grandfather helped found one of them. “I never faced much overt anti-Semitism, but certainly I had to deal with being Jewish.

“I tried to make lemonade out of lemons, wherever I went.”

He doesn’t think it’s specifically Jewish to deflect with humor, Mr. Glickman said. “I think it’s true for any ethnic group facing the challenges that come from being a minority in a majority world. There is no question that Jewish humor has a strong strain of this, but it’s not just Jewish humor. It’s ethnic — it is Italian. It is Irish. It is Black. If there is any chance that you can make fun of yourself and your foibles, including your ancestral foibles, you do, particularly if you can do it in a positive way.”

Given that Mr. Glickman’s memoir’s point is the unfortunate rise of humorlessness, what does he think has caused it? “There are probably a lot of reasons, but I think that we have lost our sense of community in America,” he said. “When you are comfortable, you can be more secure.”

He also blames the media. “I think that the nature of our media today is that people don’t take any risks, in terms of politics and humor. They are afraid that if they do, it will be all over Twitter or YouTube or Facebook. And it’ll be there for 50 years, so God forbid I say anything.” He’s not talking about so-called jokes that really are mean-spirited attacks in jokes’ clothing, and he’s certainly not talking about offensive racist, sexist, or homophobia comments, he added. “But we have created a toxic political atmosphere, where people are generally afraid to say anything that might be a bit out of the mainstream.

“I was watching an old celebrity roast with Dean Martin and Don Rickles, and I was wondering if we could do the same things today. I don’t think so. People are kind of nervous and insecure about exposing themselves to criticism. So there is a tendency to do nothing. To go back into your shell.

“Historically, our great political leaders — not just Jewish leaders! — by and large have had outstanding senses of humor. You can go back to Lincoln, Roosevelt, Reagan, Kennedy — I am not saying that I agreed with all of them, but they all were able to generate a laugh at their own expense. And Eisenhower, who was a native Kansan, said that ‘a sense of humor is part of leadership,’” he quoted. Mr. Glickman, of course, is talking about President Dwight David Eisenhower, who also said: “‘Getting along with people is how you get things done.’

“Remember, Eisenhower was the general who won World War II for us.”

One of Mr. Glickman’s mentors was Senator Robert Dole, who died recently. “He was from a totally different background than mine,” he said. He was older; “he grew up in poverty, was in the military and was seriously injured during the war. He used humor, in part to disarm other people. He often was thought of as being bitter and caustic, but he had a nice sense of humor, which helped him in leadership. In getting things done.

“If you look at politics today, you see that not a lot of leaders are devoted to getting things done. They are devoted instead to starting conflicts. I think that a sense of humor can neutralize the toxic environment.

“It can make people more likeable, and if you are likeable you are less likely to be irrelevant.”

Mr. Glickman’s proscription for the nation is that “the whole country has to relax, and get away from this agitation that contaminates so much of our political world,” he said. “It is a lot more complicated that just you tell a joke, and laugh, and everything will be better. But you have to work at lightening things up.

“Ultimately, the public has to demand that from their leaders. But also, the public needs to give their political leaders a break. They don’t have to hold them in contempt every time they say anything that’s on the edge. I don’t mean things that are out of line or racially charged — but humor is meant to be cutting edge. If it is not, it will have no impact. People won’t laugh.”

And the most important and serious thing is for all of us to keep laughing, Mr. Glickman said.