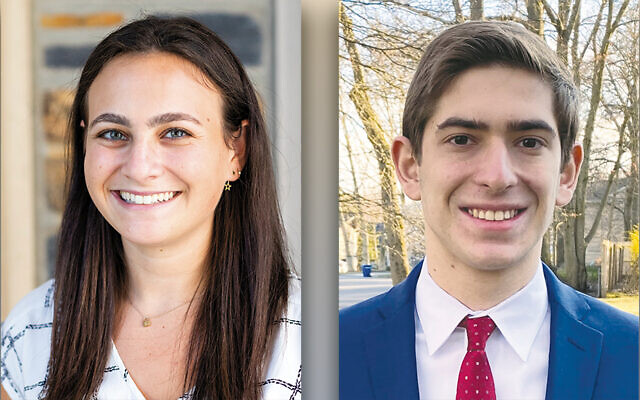 Over the years, Birthright Israel has demonstrated that it can effectively strengthen participants’ connection not only to Israel but to Judaism itself.

Birthright Excel, created in 2011, goes one step further. It takes those same young people and focuses on their professional development and commitment to philanthropy.

Ms. Cooperman, 21, is part of the 2020-21 Excel cohort. She was at last weekend’s Excelerate22 Summit in New York City, where she was joined by more than 300 Excel Fellows from North America and around the world. It was the first time the summit has been held in person since 2019.

“It was great to meet different people from different years and see how Excel played a part in their careers,” Ms. Cooperman said. “My whole cohort was back. We had been in touch virtually through a group chat, but I talk to my closer friends about once a week.” Those friends, incidentally, are from Australia, Mexico, and Italy. Birthright pays for members of the most recent cohort to attend. Alumni from past years pay for themselves.

Ms. Cooperman is a student at Duke University, focusing on environmental science and computer science. “I’m particularly interested in sustainability, renewable energy, and sustainable business,” she said. She became involved in Excel after meeting three fellow students who had done the program virtually.

“I attended an information session and thought it was what I wanted to do during the summer,” she said. “I loved my experience in Israel.” Her summer internship was at Fiverr, “a freelance web service platform. It was really cool working there.” The company, she said, was an Israeli startup that had gone public and continued to grow. “I worked at its headquarters, learning about business strategy and strategic partnerships.

“I definitely learned a lot.”

She also learned about Israeli culture. Every Excel member is matched with an Israeli, and hers was a 27-year-old third-year student at Tel Aviv University. “I got an Israeli perspective from her,” Ms. Cooperman said.

She praised the Birthright Israel Excel program. “It’s definitely very useful, not just for the internship but for the actual program. It’s about business in general, but also about how to connect with Israel from America.” This summer, Ms. Cooperman hopes to get an internship in management consulting. The Excel internship is supporting her as she pursues this goal, “letting me connect with other alumni and see what they were exploring,” she said. “It’s helpful in networking, and it’s cool to see where everyone is.”

As for philanthropy, “I’ll certainly prioritize it. I’ve always been interested in social impact and will definitely put an emphasis on that.”

The recent conference was put together well, with its combination of social activities and interesting speakers. “We could explore together and independently,” she said. “Everything was so organized.” She particularly enjoyed hearing Yoram Tietz, managing partner of EY Israel and chair of Birthright Israel Excel, who delivered the first keynote speech. “He talked about community, and the value of supporting Israel,” she said.

Max Alweiss, who grew up in Closter and whose parents still live there — he’s in Manhattan now — had been part of an earlier Excel cohort. The 23-year-old Brown University graduate, now a hedge fund trader in New York, also attended the recent summit. It was “a great experience,” he said.

Mr. Alweiss, who had participated in one other summit, said, “They always have great speakers. It’s educational, with industry-led panels and keynote speakers. You hear what people are doing in business, tech, and the community.” He was also pleased by the social aspect of the gathering, reuniting him with some people “I hadn’t seen in years.”

Like Ms. Cooperman, “I made friends with the other interns from North America, Mexico, and Canada during our 10-week internship. You all live together, and there are activities for the whole group.”

His involvement with the Birthright Excel program began after he heard about the initiative from an older friend who had participated in it. “He told me it was a super fun summer in Israel,” he said. “There are people your own age, and from a career standpoint, you get a great internship.” Participants really do grow close. “They really care about community.”

Mr. Alweiss said he had been to Israel several times before, “but now, after that trip, I know a ton of people there. Some are good friends that I still talk to and see when they come to New York. It’s one thing to visit a few times and say you support Israel. But now I have friends and real connections.” Fostering such connections is very much a Birthright goal.

“I didn’t know what to expect with the Israelis,” Mr. Alwiss said. “I didn’t really know about Israeli culture.” The Israelis he met seemed to be a bit older, “at a different stage of life.” That, he understands, is because Israeli college students generally serve in the IDF before beginning their studies. “But at the end of the day, they’re Jews,” he said. “We have a ton of things in common.”

Mr. Alweiss also appreciated Excel’s focus on philanthropy. “We’re young, and typically we don’t think about that. It’s good to get an emphasis on that early on, hearing what Jews are doing to help both in and outside of the Jewish community. I didn’t really think about that before.

“I also learned a ton at the summit,” he said; and the things he learned are likely to stay with him. “It was humbling, hearing from people not so much older than me who know so much more. They’re almost experts in their fields. It’s supercool to hear from people like that.”

His participation in Excel will continue. “When they accept you, there’s a nonbinding agreement to be connected and stay a part of the community, to varying levels. You can reach out to someone who did an internship, and they will always take your call.”

Birthright Israel Excel also meets the expectations of its program heads, who noted in a press release that after their internships, Excel Fellows “have maximized their experiences by taking on positions at top-tier companies such as J.P. Morgan Chase, Bain & Company and Google, developing strategic partnerships with Israeli companies, and starting their own companies, often hiring other Fellows.”

“There was a sense of celebration around this year’s summit,” Excel’s executive director, Idit Rubin, said. “It was the first time many of our Excel Fellows have had a chance to be together in the same location. As they brainstormed and shared ideas in an atmosphere rich with creativity and camaraderie, they were forging a deeper sense of community.”

Knesset member Yorai Lahav Hertzanu from the Yesh Atid Party also spoke at the summit. He discussed topics relating to Israel’s domestic scene, including the interplay between state and religion and LGBTQ+ rights.

In addition, attendees heard from Erin Schrode, who is a social entrepreneur and Congressional candidate, the creator of both Turning Green and Conscious Kitchen. They heard as well from David Blitzer, global head of Blackstone’s tactical opportunities group, the founder and managing general partner of Harris Blitzer Sports & Entertainment, and managing partner of the Philadelphia 76ers and the New Jersey Devils.

“Each speaker presented a different key perspective, from the Israeli lens to social activism to the cutting-edge of business innovation,” Ms. Rubin said. “Our community is diverse in its interests, but united in its joint commitment to success, growth, and giving back.”

(David Charendoff of Englewood was at the summit, but he was unavailable for an interview.)