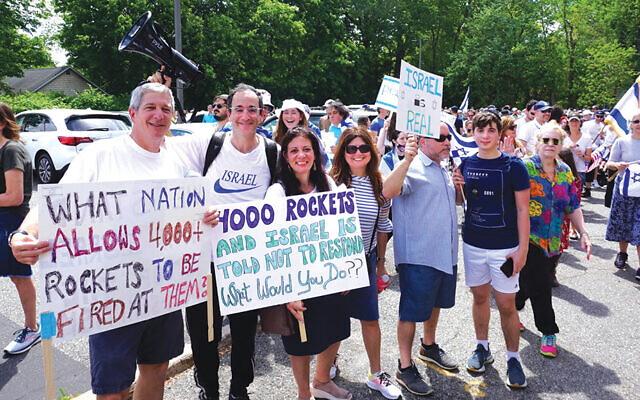 An estimated 1,500 to 2,000 people gathered in the oval across the street from Livingston’s town hall on Sunday to show their support for Israel.

The rally, which began with a half-mile march from Suburban Torah Synagogue, was the result of rapid grass-roots organizing.

On the previous Sunday, Cindi Dresdner of West Orange had received a text from her son, Ike Dresdner, showing a pro-Israel rally in Highland Park. 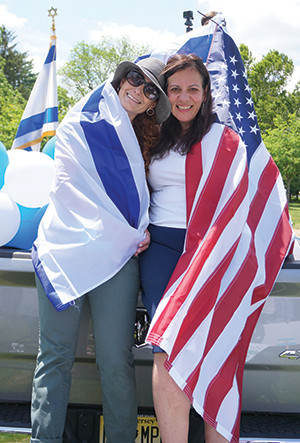 “I thought that was amazing, and I wondered if we could do something like that in West Orange,” Ms. Dresdner said.

She forwarded the picture to a few friends.

“By Thursday night, the Livingston police had given the go-ahead. The schools and synagogues were on board.” 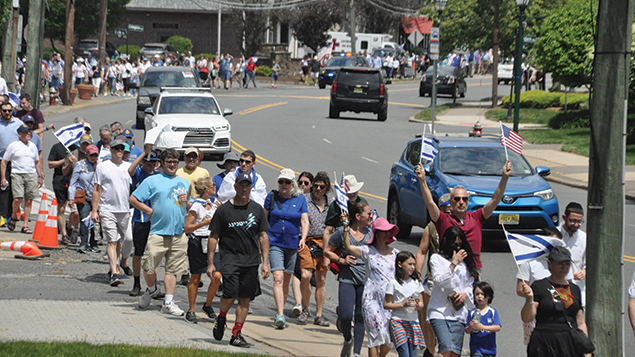 There was a festive atmosphere as hundreds walked the half mile from the Suburban Torah Center to the Livingston oval.

On Friday, those schools and synagogues told their members about the rally.

“Regardless of one’s Israel political leanings and religious affiliations, everyone came together as one, everyone unequivocally believed in supporting Israel,” Renee Glick said. 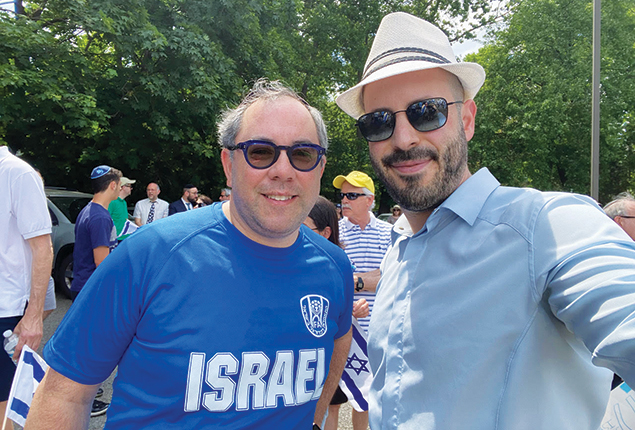 “We need to do our part and show the world we are unabashed, unapologetic supporters of Israel,” Moshe Glick said, speaking at the rally. “Our politicians need to understand there is no gray line. Either you stand with Israel, the greatest friend of the United States in the Middle East, or you stand with Hamas, a terrorist organization that celebrated the 9/11 attackers. We must do our part to insure never again truly means never again!”

“Anti-Zionism is Anti-Semitism,” he said. “It is time for us to wake up. There is a war going on and it’s a war against Jews everywhere. Where is the condemnation!?” 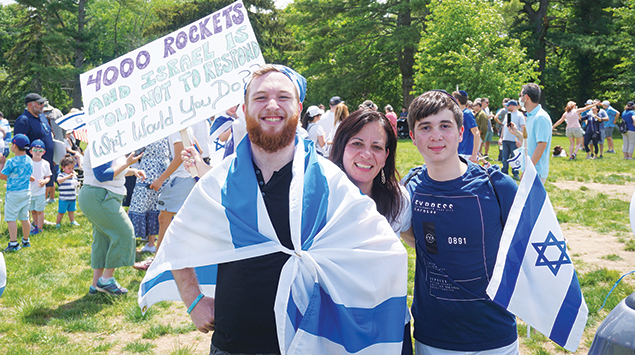 Livingston’s Mayor Shawn Klein and other township officials attended. “We specifically did not want politicians to speak,” Mr. Glick said. “We were trying to keep the remarks short,” Ms. Glick added.

“It was uplifting to be around fellow Jews, fellow people who believe in the State of Israel,” Rabbi Rachel Marder of Congregation Beth El in South Orange said. “I was really impressed with how quickly it came together.

“It was important for me to attend the rally as a Zionist as well as a progressive Jew.” 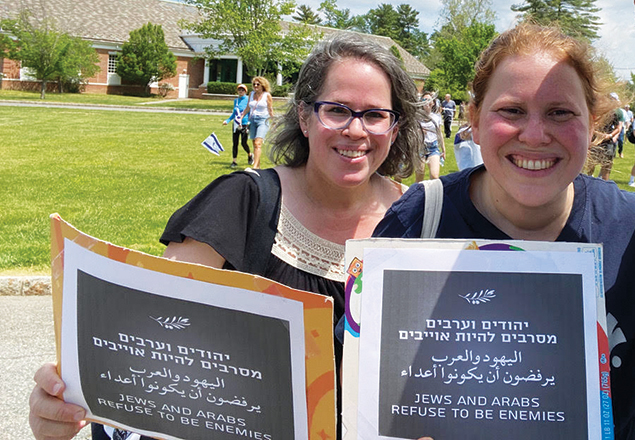 She carried a sign saying “Jews and Arabs refuse to enemies.”

“A lot of people came up to us and said ‘I love those signs!’” she reported. “There was a real atmosphere of peace and optimism.”

“There were so many more people than we expected,” Ms. Dresdner said afterward. She had ordered 150 Israeli flags. “Luckily, many people brought their own,” she said. “It became a very happy atmosphere. It was almost euphoric. People were happy to see one another. It made them feel supported.” 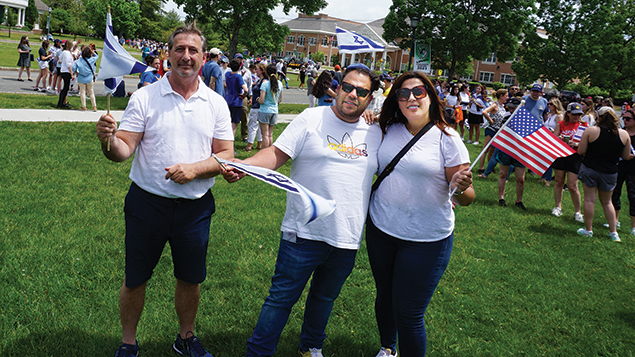 The rally served as a push back against “this moment where everyone was feeling so sad, so anxious about what was going on in Israel. You’re watching the news, you know what’s going on Israel, the rise in anti-Semitic attacks. We’re seeing videos of anti-Semitic attacks in our family Whatsapp groups and they’re very underreported.

“People feel sad. Doing something about it just makes you feel better. Two thousand people showed up on such short notice. Imagine how many people must feel what we feel.” 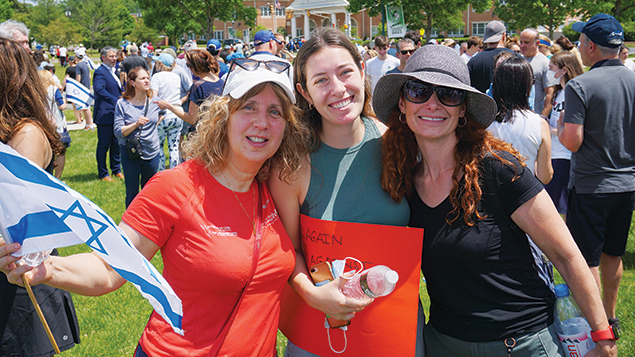 As the Israel supporters walked along Route 10 to the Livingston oval, passing cars honked in approval.

“People were chatting, people were singing Am Yisrael Chai, people felt like we were at a party. It was festive,” Ms. Dresdner said.

Before the rally, Ms. Dresdner’s father, Rabbi Zvi Lehrer, called her from Deerfield Beach, Florida. He was nervous. “There’s been violence at some of these rallies,” he told her.

“I said, the Livingston police are there, they promised us security, I can’t be worried about it.”

“Never again was something ingrained in me when I grew up,” Renee Glick said. Her father, Bernard Glickman, was a Soviet Jewry activist who traveled with Riverdale-based activist rabbi Avi Weiss in his protests against the convent at Auschwitz and Pope John Paul II’s meeting with Kurt Waldheim in Rome. “My father had an arrest record. It was inculcated in me to stand up and support Israel and fight against anti-Semitism. And unfortunately we have to now.”

The rally organizers hope to build on the rally’s success to launch a new group they’re calling the MetroWest Israel Action Squad.

“It’s an all-hands-on-deck thing,” Moshe Glick said. “It doesn’t matter if you walk to shul or drive to shul or don’t go to shul. The attackers don’t really care. Things are shifting and not in a good way. We’ve seen this movie before, and it doesn’t end well for the Jews.

“We’re organizing ourselves both politically as well as physically,” he continued. Among the projects being discussed is offering classes in Krav Maga self-defense.

“It’s dark waters that we’re entering,” Mr. Glick said. “We all see it. That’s why it’s so uplifting to see the rallies.” For more information, email MetroWestJews@gmail.com.

With rockets falling on Tel Aviv and Israel at war with Gaza, the Jewish Federation of Greater MetroWest knew how to respond.

“We immediately turned and gave $100,000 in emergency support of our partners in Israel,” Dov Ben-Shimon, the federation’s CEO and executive vice president, said.

“We decided the best thing for our support for Israel was first to send immediate funding from our United Jewish Appeal without any restrictions, in addition to the millions of dollars the federation gives on a regular basis.

“If there are additional needs, we will brings those to our leadership to make the decision,” he added.

To help make those decisions, the federation is planning a leadership mission to Israel sometime in the next few weeks.

“We partnered with the American Jewish Joint Distribution Committee to support Israel’s most vulnerable population, to make sure they have access to facilities of shelter and support and to make sure they are safe and protected,” Mr. Ben Shimon said. “We partnered with the Jewish Agency for Israel to provide support for its victims of terror fund, which allows North American Jewish federation representatives to give immediate funding and support to terror victims whose lives have been impacted or irreparably harmed by the murderous Hamas rocket attacks. We’re also supporting emergency rescue crews and their respite needs, and gave an additional allocation to the Israel Trauma Coalition, to provide for training and resilience programs for frontline workers in the south and central Israel.”

Among the communities the federation partners with is Kibbutz Erez, on the Gaza border.

“We have deep-longstanding connections,” Mr. Ben-Shimon said. “We have been in continual contact with all of our partners.”

Mr. Ben-Shimon said that the Livingston rally and other events “being coordinated throughout our community are a sign of the community’s healthy Zionist commitment to our relationship with Israel. I’m deeply proud of our ability to hold a number of events at the same time in our dozens of communities in many towns throughout five New Jersey counties.” Among those that also took place on Sunday was “a huge online hasbara and social media training event for several hundred people, live from Israel, with Greater MetroWest representation, to teach young people and adults on how to respond to anti-Zionist and anti-Jewish hate online.”