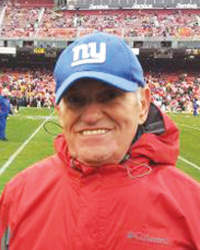 Milton Rubin, 92, of Monroe Township died April 22, 2020. Born in Bayonne, he grew up in Morristown and later lived in Colonia.

Mr. Rubin worked in sales most of his life, including for many years at Dolly Madison Ice Cream. He continued working into his 70s, retiring as sales manager from Standard Uniform Company in Irvington.

While growing up in Morristown, he helped in his father’s store, Rubin’s Deli on Speedwell Avenue.

He served in the Army for six years during the Korean War era, rising to the rank of sergeant.

A lifelong sports fan and athlete, he played on the basketball team at Morristown High School, from where he graduated. He played basketball with the Jewish Community Center Athletic Club in Morristown and softball for many years in the Synagogue Softball League and municipal leagues in Colonia, where he lived and coached youth baseball and basketball before retiring. He remained active until near the end of his life, working out two hours daily at the gym. He ran six miles every day until well into his 70s and had a weekly tennis game for many years.

He was a member of the Yiddish Club at Greenbriar and Congregation Beit Shalom in Monroe.

Predeceased by his wife, Irene, he is survived by his son, Daniel of Santa Rosa, Calif.; two daughters, Debra of New Brunswick and Miriam of Cranbury; a sister, Bella Rosman of West Orange; three granddaughters; and his longtime companion, Rita Swirsky.

Graveside services were held with arrangements by Bloomfield-Cooper Jewish Chapels, Manalapan. Memorial contributions may be made to CDC Foundation (cdcfoundation.org) or Feeding America (feedamerica.org).