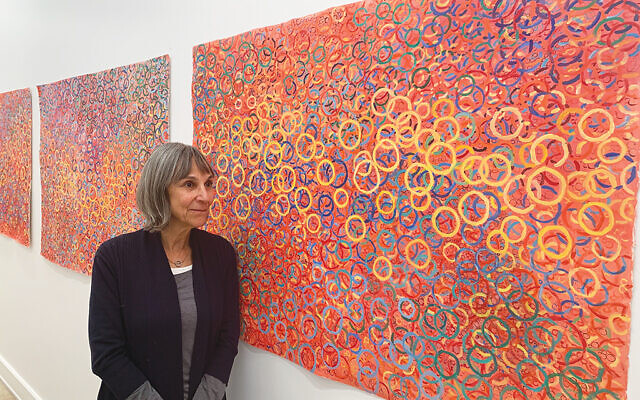 Three canvases of “Shalshelet” by painter Harriet Finck are on exhibit at Gallery491 in Montclair. Photo by Johanna Ginsberg

Circles are drenched in color — pulsing, vibrating, appearing to move across canvasses hanging at Gallery491 in Montclair, an exhibit space in a redeveloped bank building. Some of the work features hidden layers of Jewish text, barely visible, just breaking through. Much of the artistry is rooted in, and inspired by, Jewish texts.

If you drop into Crazy Mocha café on Bloomfield Avenue in Montclair, part of the historic space that features the exhibit, you might run into the artist, Harriet Finck, 69, drinking coffee at one of the tables. “It feels like I’m in my living room,” she told NJJN on a recent Thursday.

The exhibit, “Clusters, Throngs, and Bundles: Paintings and Collage,” opens with a 7 p.m. reception on Feb. 6, and runs through April 3.

Vibrant colors and repeating shapes define Finck’s art. Circles cover many of her canvasses in a visual midrash, but there are other shapes as well, from diamonds and rectangles to repeating shapes that appear in “Galapagos/Genesis” suggesting swarms of animals and birds she saw on a trip to the Galapagos Islands.

Finck described her artistic process, infatuation with circles, and love of color. Her voice is warm and calm and her words thoughtful.

“I’m interested in working with small uniform shapes that coalesce,” said the Montclair resident, who has a studio in East Orange.

Consider “Shalshelet,” one of her most recent works, which stretches over five canvasses, three of which are part of the Montclair exhibit. Inspired by the Hebrew word for chains — not for the eponymous Torah trope — it features a rich pink background covered in interlocking rings; dark blue, green, and red rings create depth while golden links appear to vibrate and glow as they travel across the foreground.

The Book of Job inspired the painting “Chains of the Pleiades.” Photo Courtesy Harriet Finck

“Chains of the Pleiades” was inspired by references to the group of stars mentioned in the Book of Job. In this piece, small golden ovals outlined in black move like so much stardust, intermingling with pink ovals and blue ones.

Through her painting, she said, she can pursue her “interest in organic abstraction and at the same time be lit up by some text I am studying.”

Trained as an architect, she said her favorite part of building design was the façade.  “Even though I was working on a three-dimensional object, I was much more comfortable dealing with flatness,” she said, professing her love for working on paper.

Raised in an Orthodox home in Far Rockaway, N.Y., Finck attended the Hebrew Institute of Long Island and Yeshivah of Flatbush in Brooklyn. Finck said that she never knew what to do with her deep Jewish background until she found the Artists’ Beit Midrash at Congregation Beth Sholom in Teaneck. The program, which started in 2004, combines text study with artistic expression.

“Something got switched on,” she said. “I felt cracked open, like my early immersion in texts finally made sense.”

She was a member of Beth Sholom while living in Ridgewood, but after moving to Montclair in the last year she joined Congregation Shomrei Emunah, where she was drawn to Rabbi David Greenstein’s artistic background and Orthodox upbringing.

Sometimes a text is in her head as she paints; sometimes she works with the text in advance. In other instances, she’ll include a text as a hidden layer that sometimes peeks through. In one piece, a collage of vertical and horizontal lines, she said she had the Tower of Babel in mind while creating it.

The exhibit is a kind of retrospective, with pieces hanging both in the café and in the adjoining building, along the walls on several floors, all open to the public. 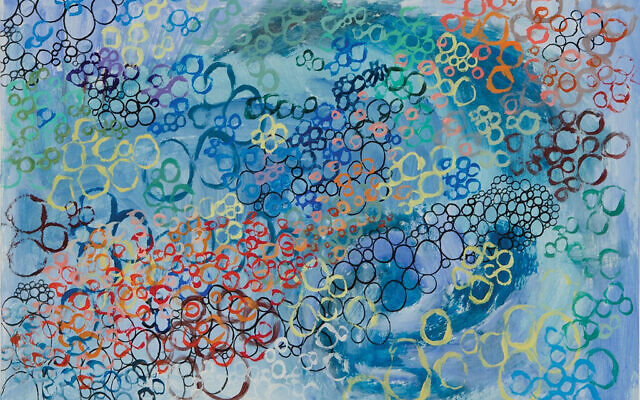 She likes to consider herself an outsider to the art world, coming to the field as a second career, without traditional credentials like an MFA. At the same time, she knows her outsider status is not entirely accurate: She studied art history as an undergraduate at Barnard, and took an art class while studying architecture with a professor who became her mentor. She received a master’s degree in architecture from Harvard University.

Finck began her career as an architect at 27, and her shift to art began slowly, she said, coming during a period when she wasn’t working. She started cutting up some of her old etchings and used the pieces to create a collage — she liked seeing if they could become whole again, reframed and reconfigured. She describes the process as “creating order out of chaos, seeing how broken pieces could come together.” Eventually she ran out of etchings and had to start creating her own pieces to cut up and realign. That led her to photographing quilts and other “women’s work,” and by the time she was 42 she was a full-time artist.

She has taught art at William Paterson University and her work has been exhibited in galleries, universities, and other spaces around the tri-state region as well as in different parts of the country, including Boston, Chicago, and California.

Her colors are consistently intense and pulse in a way that can only be captured in person; that is, unless she is working in black and white. There is one group of black-and-white pen-and-ink drawings in this exhibit, along a wall opposite “Shalshelet.” Although they still play with tiny shapes repeated, drained of color they offer a quiet meditation, something she also accomplishes in her series on Kohelet, which includes pieces in both color and black and white.

Finck is not opposed to writers writing about her work, but while she said she can discuss art on an intellectual basis, she prefers not to, viewing visual art as the antithesis of using words. “The piece should speak for itself,” she said. “It’s anti-articulate.” While she’s engaged in the creative process, Finck added, she shuts off the verbal side. “I’m sending out something that’s coming from my cells.” Of the trend in art schools to teach artists to verbalize their work, she said, “That does not work for me.”

At the café she frets that a couple of paintings are not hung evenly, that one needs new framing because the paper is starting to buckle inside. She looks around and worries that one painting that may have been hung too close to a table, wondering if it should be moved to protect it. At the same time, she expresses joy that people are having their coffee surrounded by her artwork.

“I’m deeply and crazy infatuated with circles,” she confessed. “And I’m not done with them yet.”