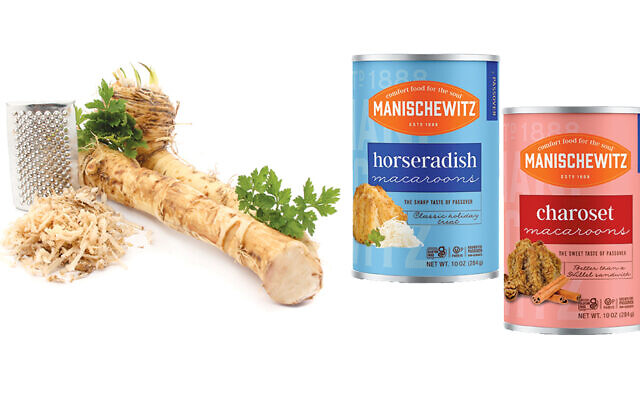 It’s not easy being Manischewitz..

How do you maintain a 134-year-old brand whose very essence is Ashkenazi Jewish food like your grandmother — or your grandmother’s bubbe — used to make, while making sure that the new generation of shoppers don’t dismiss your offerings as food for grandmothers?

The pinned tweet of @ManischewitzCo announces that “Manischewitz is the nation’s leading brand of kosher food products. We’re more than just matzo!”

In the company’s sporadic posts to its 5,163 Twitter followers, Manischewitz adopts a light-hearted approach, presumably hoping to seem more with-it and also, perhaps, of going viral.

Which would explain the two images posted on Tuesday of packages of Manischewitz-brand macaroons with horseradish and charoset flavors.

They were posted in response to a Manischewitz tweet earlier this month, which suggested: “Thinking we should shake things up a bit. Whatcha think?”

Responses ranged from “I wish this was real” to “Why do you hate us Jews, Manischewitz?”

Neither horseradish nor charoset currently are listed as available on Masnischewitz.com, which lists 17 flavors of canned macaroons, including “Red Velvet” and “Rocky Road.”