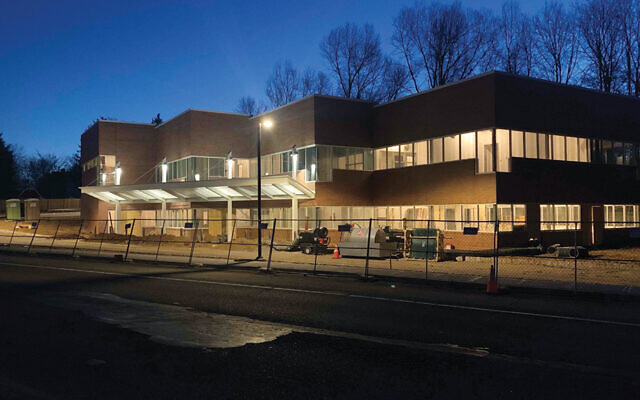 The new JSDD building in Livingston is almost finished.

Construction on the new Livingston building of the Jewish Service for Developmentally Disabled, which began last summer, is on schedule to be completed by the beginning of July.

“It’s fully enclosed,” Linda Press, the agency’s executive director, said. “I’ve been giving construction tours. They’re starting to do some of the landscaping, and we’re in the process of ordering furniture.”

Meanwhile, the organization is in the final stages of its $10 million, four-year capital campaign. “We’ve raised $8.2 million toward the $10 million. It’s the last big push,” Ms. Press said.

That push includes selling dedications on bricks for the pathway that will lead into the administrative floor of the building. The other floor will be devoted to the JSDD’s programs.

Since last spring, the agency is running the activities of its WAE Center — the acronym stands for Wellness, Arts, and Enrichment — virtually, and that won’t end fully when the state permits in-person classes again.

“We want to at least be able to offer a hybrid for people who might not feel well, who might be in rehab, or for whom transportation is an issue,” Ms. Press said. The remote sessions have been “an opportunity for reaching new people who would not otherwise be able to access us.”

Ms. Press expects the agency to move from its present West Orange offices by September. Because the new space is more than double the size of the old, if pandemic regulations require limiting use of the building to 50 percent of capacity, that won’t be a problem.

In June, Ellen Goldner of Mountain Lakes will conclude a three-year tenure as president of the agency. Ms. Goldner also is a past president of the Jewish Federation of Greater MetroWest NJ.

“It’s been a pleasure and honor,” Ms. Goldner said.

She enjoyed seeing the community the WAE Center created in pre-pandemic times.