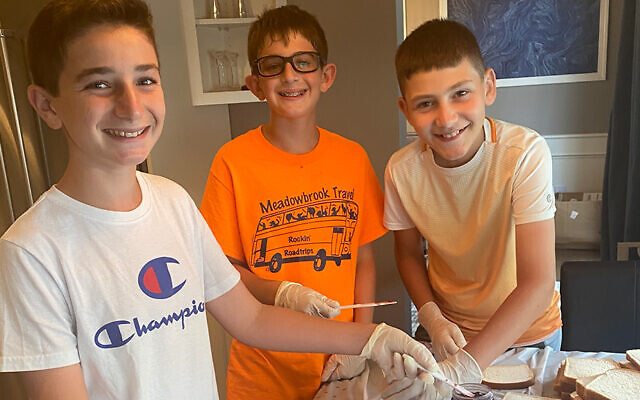 Peanut butter and jelly sandwiches are practically iconic lunch food. They are also — perhaps not coincidentally — easy to make.

That’s at least part of the reason Kara Baltuch, the tikkun olam chair at Temple Beth Shalom in Livingston, launched the congregation’s Summer Sandwich Challenge. The far more serious reason is that it’s necessary because many people in New Jersey are food insecure.

The project — which already has spurred the creation of some 1,800 sandwiches — has captured the imagination of young and old congregants and those farther afield.

Some 12-year-olds whose families belong to the synagogue have chosen sandwich-making as their mitzvah project. Three of them, Ryan Laverman, Matthew Handler, and Evan Hermann, all of Livingston, say they embraced the culinary challenge for its value to others.

“It is important because everyone should have something to eat and nobody should be hungry,” Ryan said; “People need food, and this is a way we can help,” Matthew added. “It is important to help because not everyone is fortunate enough to have extra food,” Evan said.

Ms. Baltuch said she has been pleasantly surprised by the response to the challenge. Launched on July 5, with the goal of getting 1,000 sandwiches by the end of that month, it brought almost twice that amount of food to the synagogue office by late July.

The sandwich project was launched in partnership with Livingston Neighbors Helping Neighbors, a local organization that provides support to people in need. “There is need in every community,” reads the group’s website. “Anyone who finds themselves struggling in our community, we want them to know that their neighbors care. We are here to help those in need via our food pantry and through applicable support as they work to get past challenging times.”

Neighbors Helping Neighbors has a direct connection to food pantries in Newark, so it sends someone to pick up the sandwiches and bring them there, Ms. Baltuch said. But the project —– and the synagogue’s winter cooking program — have done even more, bringing synagogue members together at a time when covid has kept them apart.

Speaking of covid, “We ask those who make sandwiches to wear mask and gloves,” Ms. Baltuch said, and those rules also are observed when a group gets together to make them outside, in the synagogue’s parking lot. “The incoming alef class made sandwiches together, and the preschool will have mothers come in and do it,” she said.

Each sandwich is placed in its own plastic bag and brought to a cooler in the synagogue office. “A man comes by every day and takes them to Newark,” Ms. Baltuch said. “They practically go as soon as we get them.” Participants are also given the option of making cheese sandwiches.

This is the second food-making donation program that Temple Beth Shalom has undertaken this year. In January, under the name “Cooking for the Community,” members joined on Zoom to cook a pre-circulated recipe, making such foods as baked ziti, chili, lasagna, and macaroni and cheese.

“Through that program, TBS donated 500 homemade meals to various soup kitchens in Newark,” Ms. Baltuch said. “Back in the winter, we were looking for ways to get people involved, and cooking is always a good way. We had a monthly Zoom to cook together. We distributed the recipe ahead of time so people would know the ingredients. People were home and looking for ways to help from the safety of their homes. Some people even did the cooking before the Zoom but just wanted to see their friends.

“Our first Zoom meeting was on Martin Luther King Day, a day of service. We did it every month until June, and then we thought, ‘What can we do now?’” What they did may ultimately lead to the creation of some 3,600 sandwiches.

“It’s really taking off,” Ms. Baltuch continued; so far initiative has involved at least 100 sandwich-makers, and the feedback from the pantries has been extremely positive. “The challenge has been spreading throughout social media, where congregants are challenging others to make sandwiches and posting pictures with the hashtag #SummerSandwichChallengeTBSNJ.”

“I’m so excited about it,” she said. “I never imagined how big it would become.”

Who: Temple Beth Shalom of Livingston

Where: At the synagogue office, 193 E. Mt Pleasant Ave., Livingston

What to do: Just make sandwiches, wrap or bag them individually, and drop them off at Temple Beth Shalom.