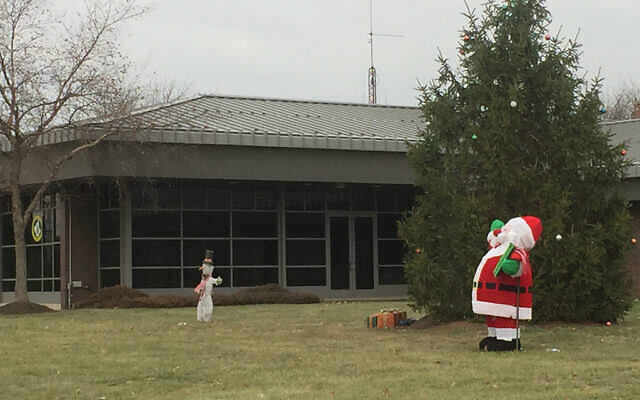 Holiday decorations on the grounds of Piscataway’s municipal building include Santa Claus and a Christmas tree but no menorah. Photo courtesy Staci Berger

Staci Berger, a Democratic committeewoman and president of the Central Jersey Progressive Democrats, was surprised by the pushback to her request to place a menorah alongside the traditional holiday display in front of Piscataway’s municipal building, which includes a lighted Christmas tree, reindeer, gift boxes, Santa Claus, and a “Seasons Greetings” sign.

“This is something I never thought we would have to fight about in 2019,” she told NJJN.

The dispute occurred after the Dec. 10 township council meeting when Berger, a Piscataway resident, made the request. Rather than simply greenlighting it, as Berger expected, Mayor Brian Wahler and the council asked the township attorneys to conduct “appropriate research and analysis to determine if and how a menorah could be displayed,” according to a statement sent to NJJN from  township attorneys Rajvir Goomer and Michael Baker and township spokesperson Gene Wilk.

“No Piscataway official ever stated that the Township would not or could not include a menorah in its season’s greetings display,” they wrote.

Berger said she made a similar request in 2018 and never heard back from the local government, a contention the officials flatly denied in their statement.

“Also contrary to Ms. Berger’s allegations, there has never been a request for a menorah in the Town Hall holiday display for over three decades,” they wrote. As the holiday season has ended, a resolution to the controversy is likely to extend into the new year.

Mindy Goldstein, also a Piscataway resident and treasurer of the Central Jersey Progressive Democrats, said considering that a menorah is lit at the New Jersey Statehouse and other municipalities have menorahs as part of their holiday displays, she couldn’t understand why the township needed time to investigate the legalities.

“It’s a choice and they’re choosing not to do it,” said Goldstein. “This is particularly disturbing in light of what is happening with the rise of hate crimes in our country. You would think they would stand behind the Jewish residents of our community and celebrate. I hate to throw around the term anti-Semitism, but this is discrimination, refusing to represent people who are asking to be represented.”

Piscataway, she said, is one of the most ethnically diverse communities in the state. “Our diversity is the bedrock of this community. It is why people chose to live here and expose their children to it. It is something we take pride in.”

Proponents of adding a menorah to the display point to a 1989 decision by the U.S. Supreme Court allowing both a menorah and Christmas tree on government property, as each are symbols acknowledging the holidays rather than an endorsement of the respective religions. “[B]oth Christmas and Chanukah are part of the same winter-holiday season, which has attained a secular status in our society,” Justice Harry A. Blackmun wrote in the majority opinion at the time.

In their statement to NJJN, the township attorneys said that while the 1989 ruling allowed menorahs to be displayed on municipal property, it also set forth certain factors that needed to be reviewed on a case-by-case basis. These factors, they wrote, can be affected by a “particular physical setting,” including the size of a menorah in relation to an overall display, language presented, what non-religious items are included, and proximity to government buildings.

Since the original ruling, there have been 829 cited court decisions with at least 54 specifically outlining the proper way to review a menorah display, and the township maintains it needs time to ensure compliance with the Establishment Clause of the Constitution separating church and state.

Berger contends much of the problem stems from a political dispute against the Progressive Democrats, who in the last few years have run candidates against the council’s “regular Democratic machine. They’re very angry and have directed personal attacks against myself.” The mayor and all the members of the council are Democrats.

Municipal leaders don’t deny there have been political differences with Berger and in the statement referred to the menorah dispute as “a manufactured issue made up and stoked by Staci Berger and the Piscataway Progressive Democrats for political gain.”

The statement said the town has always been inclusive of all religions and cultures, as evidenced by its social media posts on various holidays and celebratory events it promotes and participates in.

“Township officials look forward to the completion of the legal research to see how Piscataway can further broaden its well-established inclusivity,” they wrote in their statement.

But Berger alleges this is little more than a convenient excuse.

“That this is even an issue is mind-boggling,” said Berger. “To me it just shows a lack of understanding that is really disappointing. It’s not so much insulting to me as to members of the Jewish community, coming on the heels of the tragedy in Jersey City.”