Andrea Goldberg, a social worker who lives in Essex County, called the uptick in anti-Semitism “more violent and prevalent than ever in my lifetime.” She was one of tens of thousands of Jews from the tri-state area, and states including Virginia, Ohio, and Massachusetts, who gathered in Columbus Park in Brooklyn following Sunday’s march across the Brooklyn Bridge.

“It’s important to show solidarity with people who have been assaulted and killed, and their families, and to feel the support of the larger Jewish community and greater metropolitan New York community,” she told NJJN.

Organized by the UJA-Federation of New York and the Jewish Community Relations Council of New York (JCRC), the march drew an estimated 25,000 people to protest the rising number of anti-Semitic hate crimes in the city and nearby locations, to express their solidarity with the traditionally observant Jews who have come under attack, and to say that they won’t be cowed or intimidated by the scourge.

Those crimes have included a vicious machete attack in Monsey, N.Y., which injured five; a brazen attack on a kosher supermarket in Jersey City, which killed two chasidim, a policeman, and an employee of the business; and a rash of assaults against chasidic Jews in Crown Heights and other Brooklyn neighborhoods. 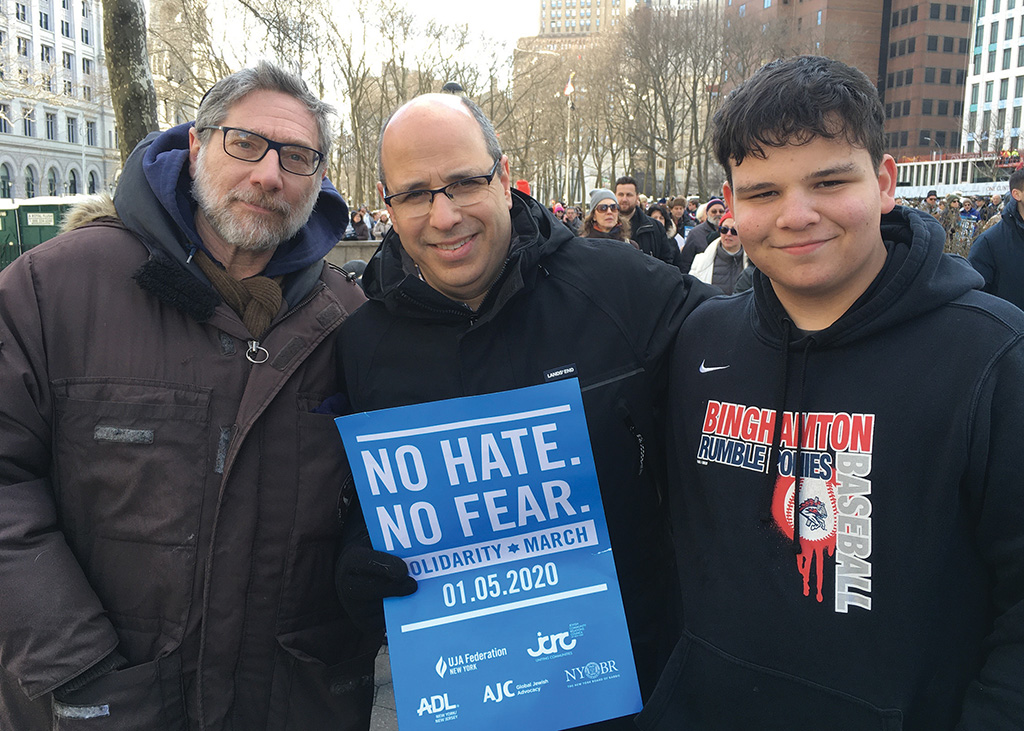 Brianna Halpern, a junior at the Rae Kushner Yeshiva High School in Livingston, told NJJN the school’s AIPAC chapter, of which she’s an active member, mobilized participants to attend the march. She said it was important for her to attend.

“If you’re a Jew you have to stand up for everybody,” Brianna said. “By all of us being here today it shows we’re not afraid to fight.”

The event brought together segments of the Jewish community that are often at odds with each other and rarely share the same space: people from the left, right, and center, as well as those from all religious streams of Judaism. 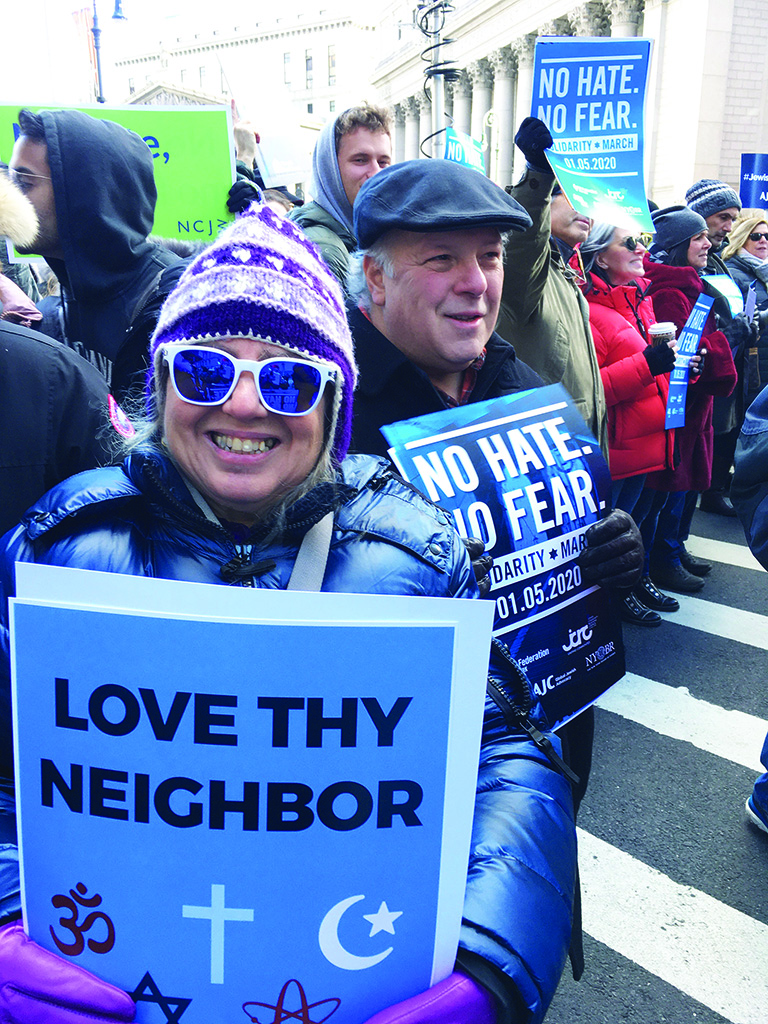 After gathering at Foley Square and crossing the Brooklyn Bridge, the marchers ended their trek with a rally in Brooklyn’s Cadman Plaza, where they heard more than a dozen speakers, including politicians, writers, activists, and leaders representing the major denominations.

Speaking to NJJN after the event, UJA-Federation CEO Eric Goldstein said his organization and the JCRC began organizing the march within hours after the Monsey attack. “People needed an outlet. People are feeling very concerned; they’re feeling anxiety; and they’re feeling anger,” he said.

The two organizations received assistance from the Anti-Defamation League, the American Jewish Committee, and the New York Board of Rabbis, Goldstein said.

Hindy Poupko, the federation’s deputy chief planning officer, said she and her colleagues “had begun talking about doing something like this for a whole year.” Their objective was “to tell the traditional Orthodox community that we’re aware and deeply concerned about what’s been going on.” But things became much more urgent after the Monsey attack, when it became clear that “this was the time for large-scale mobilization effort.”

Poupko said organizers wanted to ensure that participants wouldn’t just hear speakers, but also walk across the bridge, “demonstrating with their own two feet that our community is proud, unafraid, and fed up” with the violence and hatred. Bringing the marchers into Brooklyn, she said, would further express solidarity with the two populations that have been targeted in most of the attacks — the Chabad and Satmar chasidic movements, both based in the borough. 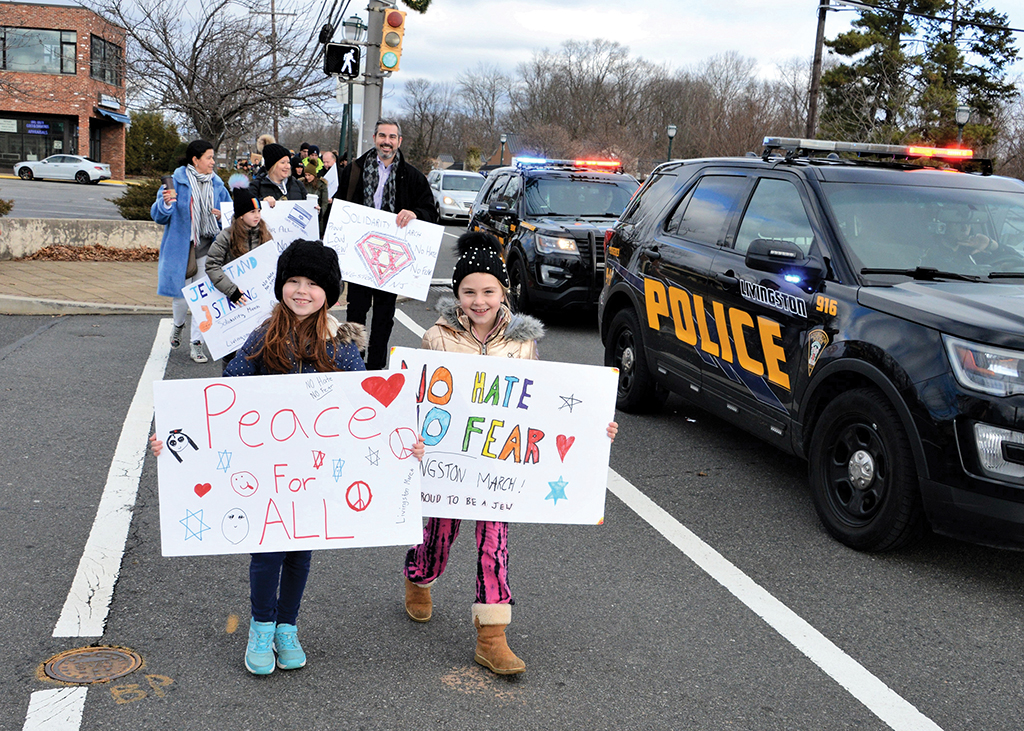 Children march in Livingston against anti-Semitism. Photo by Jerry Siskind

Cheryl Fishbein, president of the JCRC, said organizers also “made a conscious effort not to politicize” the event and “to make sure that everybody felt represented.” They felt strongly that the march and rally should be a community-based, grassroots event, she said.

Rabbi Laurence W. Groffman attended with his son Isaac and a group of some 15 members of his congregation, Temple Sholom of West Essex in Cedar Grove. He said it’s “good for people to do something” and important to “stand as one community” in the wake of recent violent attacks against people because they’re Jews.

“We’re here because we feel it’s important to state clearly, loudly, and in no uncertain terms that anti-Semitism is unacceptable,” Groffman told NJJN.

The event drew steam last week with an editorial in The New York Times, which called on readers, Jewish and non-Jewish, to join the march. Among those leading the march were most of New York’s senior politicians, including Gov. Andrew Cuomo and Sens. Kirsten Gillibrand and Chuck Schumer, who is Jewish. N.J. Attorney General Gurbir Grewal also attended.

The marchers themselves showed a similar resolve.

He praised federation leaders for organizing the event. “The march showed, once again, the power of a federation community, and what we can achieve together.” 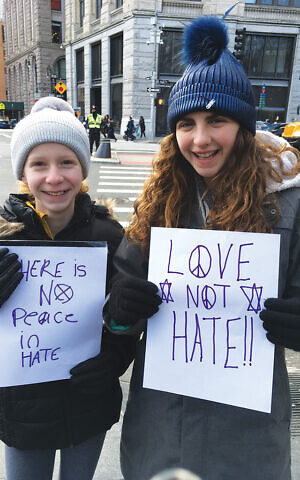 Jordan spoke of the unique dilemma faced by Jews of color like himself whenever tensions heighten between Jews and their black and Latino neighbors, saying they are often “caught in the middle. I’ve been asked [by different people] on social media, ‘Why am I silent about anti-Semitism but vocal about racism?’ and ‘Why am I silent about racism but vocal about anti-Semitism?’”

“People from both groups expect you to pick a side — that one should take precedent over the other,” Jordan said. “But that’s just not a dichotomy. I’m just as much black as Jewish.”

“This is not just a march,” she told the crowd. “We are here to send a clear message. We are proud of who we are. We will never take our yarmulkes off our heads. We are here today in strength and courage.”