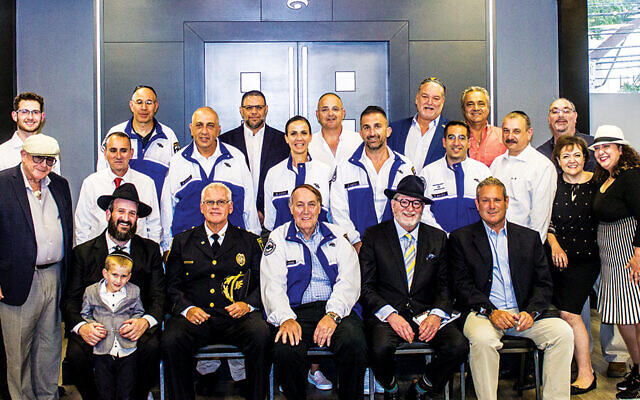 This pre-Shabbat photo shows the group about to head into dinner. (Efrat Weisblatt)

What do you do if you find out you’re going to have unexpected guests for Shabbat dinner?

And then you learn that there are 18 of them?

And then you find out that no, there will be even more people around your table?

If you’re Rabbi Mendy and Altie Kasowitz, the co-directors of Chabad of West Orange — positions you’ve held for the last 19 years — you roll up your sleeves, set up more chairs, and make sure it’s the best kind of Shabbat dinner you can host.

It all started with a phone call from Michael Safris, chief of the deputy division of the Essex County sheriff’s office. Mr. Safris, who is Jewish, has been to Israel 40 times and is a long-time friend of the Kasowitzes. He wanted to know if the couple would be willing to host a group of Israeli police officers who had come to New Jersey on a trip with an organization called the Police Unity Tour that would take them to Washington D.C.

The Kasowitzes replied with a resounding yes.

“We have always supported all law enforcement, including not just police officers but firemen as well,” Rabbi Kasowitz said. “We do our best to be there for all those men and women, whether Jewish or non-Jewish. They risk their lives every day so we can live in safety and security.” 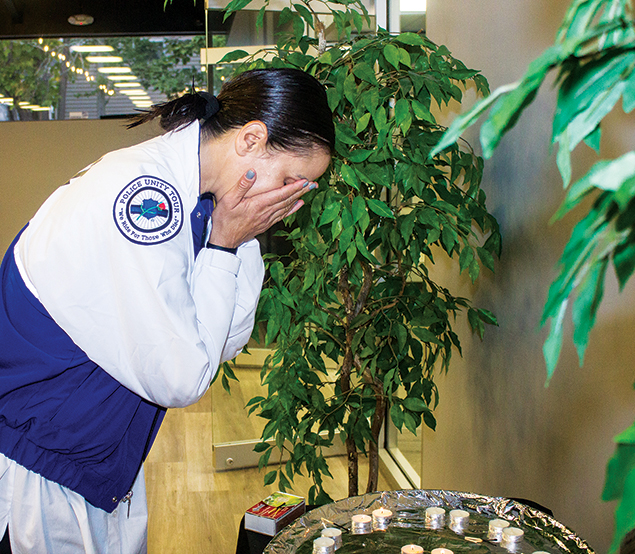 The nonprofit organization called Police Unity Tour was founded in Florham Park in 1997. It honors police officers who died in the line of duty. It now has nine chapters in seven states with three of those in New Jersey. The Florham Park chapter is designated as Chapter One.

According to the organization’s website, every year for the past 24 years police officers take off on a “four-day bicycle ride from New Jersey to Washington, D.C.” Police Unity Tour’s mission is not only to remember those officers who died in the line of duty, but to raise funds for the National Law Enforcement Officer’s Memorial in the nation’s capital. The Israelis, who were set to cycle with their American counterparts, were led by a commander of the Israeli Border Police, Major General Amir Cohen, and Yoni Zeitak, who is chief of Judea Area Operations and Patrol.

“The first part of the evening was a meet and greet of sushi and drinks with introductions all around,” Rabbi Kasowitz said. It was followed by candle lighting and services. Most of the Israeli police officers—both men and women—are from secular backgrounds. Still, “they all knew how to participate in the evening prayers,” Rabbi Kasowitz said, adding with a laugh: “Because no matter their level of observance, they read Hebrew better than we do.”

After a lot of schmoozing, the traditional Friday night dinner began. The Israeli police officers were joined by the other guests Mr. Safris had told the Kasowitzes to expect. They included West Orange Police Chief James Abbott. “We enjoy a close relationship with the West Orange Police Department, and especially with Chief Abbot,” Rabbi Kasowitz said. “So when, after davening, we all sat down to dinner, there was much laughing, enjoyment, and good humor. During dinner, Chief Abbot leaned across to me and said, ‘You thought I was just going to come for a little while only to be polite. But you were wrong. I’m not leaving until after dessert.’”

Ms. Kasowitz and a team of volunteers put the meal together, Rabbi Kasowitz added. 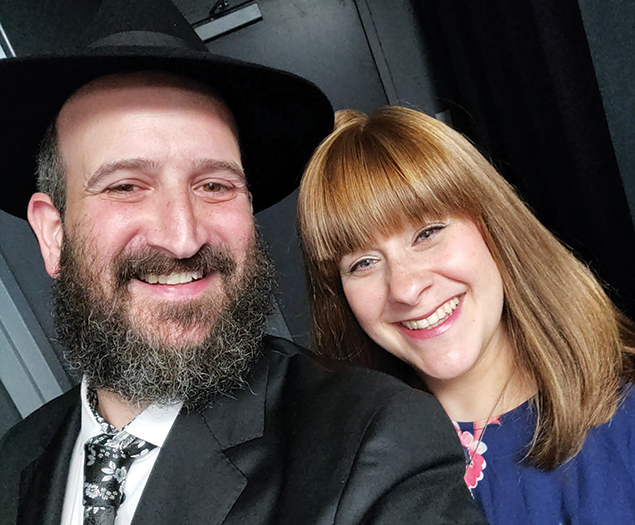 Many of the Americans and the Israelis knew each other from past Unity Tours, not just in the States but also in Israel.

The primary reason for the officers’ gathering — whether here or in Israel — always has been to honor their fallen comrades, both American and Israeli. When they do come together, they also talk about what they can learn from each other in order to do their jobs better. That includes understanding both the similarities and the differences between their security protocols. In Israel, American police officers have observed firearms demonstrations and simulations about how to apprehend and capture terrorists, as well as other types of training exercises. (And, of course, though it’s not the focus, there’s always the opportunity to take advantage of sightseeing from the Galilee to the Negev.)

“The idea that Friday night was to have an enjoyable evening,” Rabbi Kasowitz said. “Our focus was on doing our part to give back and say thanks, not just to the Israeli police officers, but to local police as well. They have very challenging jobs. Entertaining them at dinner was a truly awesome and humbling experience for us.

“It’s true that the Israelis face different challenges than our American police officers do, but in our eyes, they are all heroes and we were happy to be together with them in West Orange for Shabbos.”

While the mood of the evening was light-hearted, there was an underlying gravity that the Americans and Israelis acknowledged: Both have lost too many fellow officers in the line of duty.

Through the common bond of their shared values and experiences, and events like the annual bicycle ride to the National Law Enforcement Officers Memoria, they hope to keep honoring the memory of their fallen colleagues.