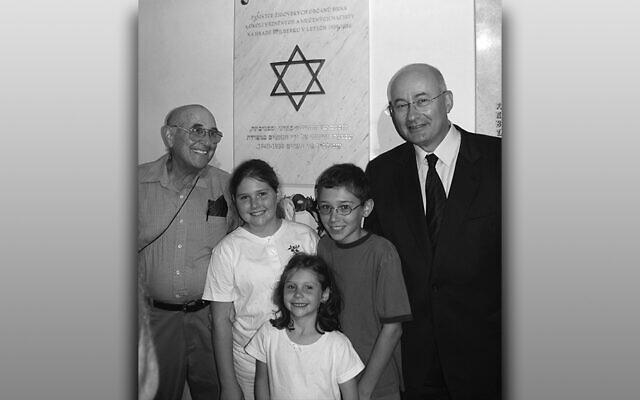 The author, left, and three of his grandchildren join Israel’s ambassador to the Czech Republic at the dedication of the plaque honoring the Jewish prisoners the Nazis held in the Spielberg Fortress.

Czechoslovakia became the first victim of Nazi Germany’s aggression when its army rolled across the border in March of 1939. This was the first seizure of an enemy country. Prior to this event Germany absorbed Austria, a German-speaking land that enthusiastically voted 90 percent plus to welcome its invaders and form the “Greater Germany.”

But Czechoslovakia was different. There Czechs sadly, many with tears streaming down their cheeks, watched the Wehrmacht parade before them and seize the country. Bohemia and Moravia now became a German puppet state called Protectorate Bohemia and Moravia. Slovakia became a Fascist state under the leadership, of all people, of a Catholic priest, Father Joseph Tiso.

Since the Nazis seized power in Germany in 1933, many new laws were promulgated that were designed to make the life of Jews as painful as possible. About 50 percent of the German Jews emigrated, for as long as it was still possible. These same laws were now applied to the Jews in the new Protectorate. Like the Jews of Germany, the Jews of the Protectorate made urgent plans to get away, but their departures became ever more difficult. It wasn’t just all the red tape the German authorities placed on these efforts; the immigrants faced a hostile world that had little or no desire to permit Jews to enter their country. The United States went to great pains to follow suit by setting up quotas that strictly limited the number of emigrants who were allowed to enter it from each country. 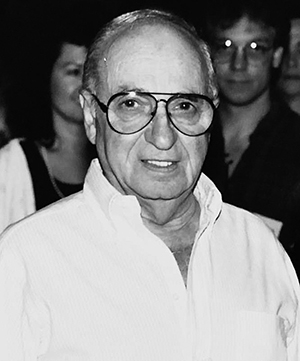 My Uncle Isidor sent us a desperate postcard pleading for help. (Our little family — Father, Mother, Steven and I — had landed in New York on November 6, 1940.) He had registered for a U.S. visa under the Czech quota in 1940 and was advised that his number would be “considered” in eight years. When this fine and dedicated doctor, the father of eight and a learned Jew, starved to death in Terezin, he faced six more years of waiting before his application to enter the United States would be “considered.”

Uncle Isidor’s lot was not different than that of most of the Jews in Europe. To survive, you urgently needed a miracle — and miracles were few and far between. Take, for example, my life-long friend Paul Tyras, who spent three years in the concentration camp called Terezin before he, his little sister, and his parents were sent to Auschwitz. When they arrived there, as was the common practice, they were separated into two columns along the side of the train that had brought them — women, children, and old men to the left, the rest to the right. Most of the commands came from members of the Sonderkomando (Special Command Forces). These were prisoners — mostly Jews — who got better treatment for a few months in return for organizing the mass of people who were processed in this death factory every day.

The two columns were ordered to move toward a small group of SS men. During this brief march, a member of the Sonderkomando recognized Paul’s father. They had been school friends in their hometown many years ago. Suddenly this man snuck up behind Paul and whispered: “When they ask you how old you are, tell them you are 16,” and then he disappeared. 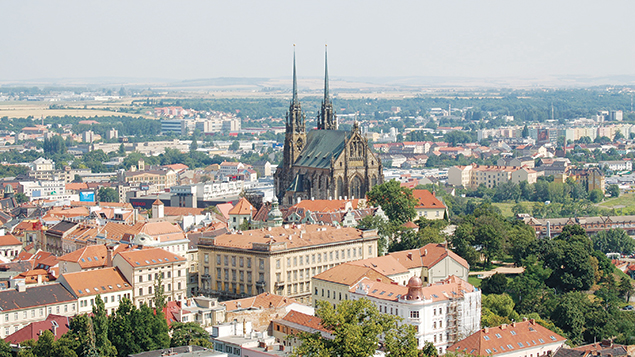 The Tichos lived in the ancient city of Brno. (Norbert Aepli)

When Paul and his father arrived before the SS men, Paul was asked the anticipated question, and the 14-year-old answered “16.” He and his father were directed to go to the right and marched to their assigned barracks. Paul never saw his mother and little sister again. Other inmates told them: “By the time you reached the barracks, they were already dead.”

This was how Paul’s life was saved. This was Paul’s miracle. Paul and his father were sent to a slave labor camp, where they spent a brutal year repairing railroad cars. They were liberated when the Russian army arrived.

The Gestapo arrested my father, Nathan Ticho, in April 1939, a month after the German war machine marched into Czechoslovakia. No rational explanation or reason was given. He was just a prominent Jew. He was sent to Dachau. His younger brother and business partner, Baruch Ticho, was also arrested on the same day. Baruch was murdered there on August 19, 1940; the Nazis sent his ashes home. (In 1940, the Nazis still performed certain niceties.) His wife buried them in a family grave and she  placed a plaque there. 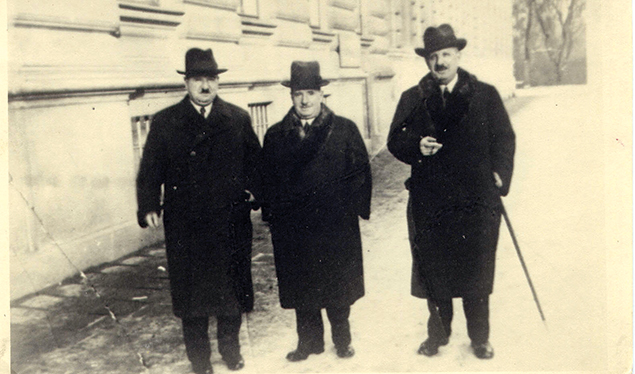 From left, the brothers Nathan, Jacob, and David Ticho, before the Nazis invaded Czechoslovakia. Only Nathan survived.

My father was released in August 1940. When I saw him after his release, he looked remarkably younger. Perhaps it was the loss of some 50 pounds or more or the missing small moustache or the long hair that gave that false impression of youth. He looked a little awkward in his old suit, which suddenly looked like it was several sizes too large for him. For many years after his return, he would not speak about his ordeal. He rarely and very reluctantly spoke about his brutal treatment and abuse. Only, one day, when he learned that his brother, whom he left behind in Dachau, had been killed, he tearfully told me how “lucky” he was to have survived and how sorry he was that his younger brother had not been so fortunate. Of course, I asked, what did he mean by “having been so lucky?” How could you call anything that happened in the Dachau concentration camp as a piece of luck? After a few more demands, he began to recall.

All prisoners in the camp had a color identification on their uniform so that each one’s “crime” could be readily identified — communists had a red patch on their shirts, common criminals a brown one, homosexuals a pink one, Jews a yellow one, and so forth. Jews were, by far, subjected to the worst treatment. They received the poorest food, slaved the longest hours, and lived in the worst barracks. Jews were employed in a stone quarry where they had to move mounds of heavy rocks from one corner of the camp to the next one — and having done that, they were ordered to bring all the rocks back again.

This was beastly work and prisoners simply died of exhaustion and beatings. Others were driven to suicide — some by rushing at the fence, hoping to be shot by the guards or to be electrocuted when they reached the electrified fence. In one case, father told me, a prisoner broke a light bulb and started eating the glass. Father confessed that thoughts of suicide had crossed his mind. As he was reaching the end of his endurance, he developed a serious rash on both hands. It was very painful. However, Jews were not allowed to seek medical attention at the camp’s infirmary. Nevertheless, Father dared to approach the building and was met by a guard who demanded that he leave at once. 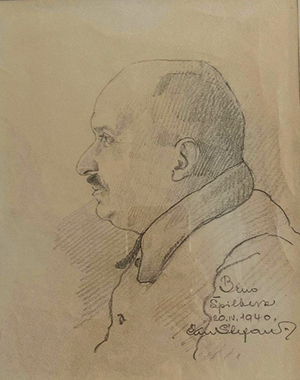 Another prisoner drew this image of Nathan Ticho, when they both were held in the Spielberg Fortress. It was smuggled out just before Nathan was sent to Dachau.

Father had the nerve to show the man his hands and begged for assistance so he could properly fulfill his job. After a few long moments, the attendant relented. “I can’t give you any medication but I will assign you to two weeks of light work,” he said. Father left the infirmary with this life-saving permission slip.

For the next two weeks, instead of hauling heavy rocks, he sat on a stool, at a table, hammer in hand, straightening used nails.

This, he insisted, saved his life. This was his miracle.

Charlies Ticho of Hackensack was a film producer and director for more than 60 years. He retired at 88 — he’s now 94 — and he has spent the last five years writing about his experiences.