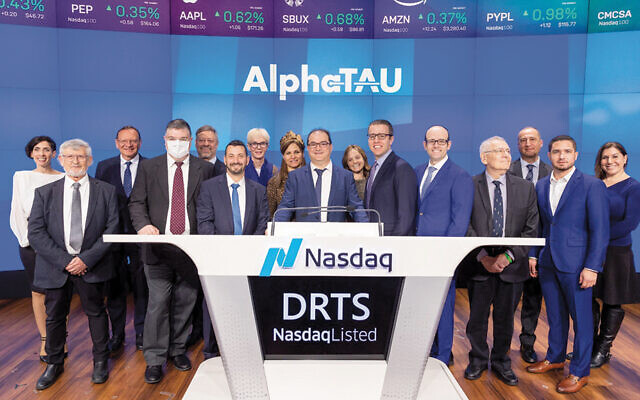 At the bell ringing for Alpha Tau Medical on March 24 at Nasdaq, CEO Uzi Sofer stands at the center of the podium, CFO Raphi Levy is immediately to the right, and VP Legal Rebecca Becker is at the far right. (Photo courtesy of Nasdaq, Inc.)

On March 24, two graduates of the Frisch School in Paramus were at Nasdaq MarketSite in Times Square to ring the opening bell. The two, who were part of a delegation from Jerusalem-based Alpha Tau Medical, were Teaneck native Rebecca Feldman Becker, Frisch class of 1996, and Monsey native Raphi Levy, class of 2001.

For Ms. Becker and Mr. Levy, the business trip also presented a welcome opportunity to see their families back in the States. Ms. Becker is the daughter of Aviva Feldman and the late Rabbi David Feldman of Teaneck; Mr. Levy’s parents are Sarah and Chaim Levy of Monsey. “America never felt so far away as it did for the past two years,” Ms. Becker observed.

She made aliyah in 2011 and lives in Jerusalem with her husband and six children. Her brothers, Rabbi Daniel Z. Feldman of Congregation Ohr Saadya in Teaneck and Rabbi Jonathan Feldman, are prominent Jewish educators — in fact, Jonathan Feldman was one of Mr. Levy’s teachers at Frisch.

Mr. Levy, who made aliyah in 2008, normally travels to the United States for business about every six weeks; Alpha Tau Medical has an office and a manufacturing facility in Lawrence, Mass. He and his wife and three children, who live in Givat Shmuel outside Tel Aviv, visit with family in the United States once or twice a year.

“My family was always supportive of my Zionist tendencies, but they miss us — especially the grandkids,” he said. “My mother’s parents had tried moving to Israel multiple times and were unsuccessful, and for now I’m the only one in my immediate family who’s pulled the trigger in a lasting way.”

After receiving a master’s degree in electrical engineering from the University of Pennsylvania, he worked at Goldman Sachs before becoming chief financial officer of Alpha Tau in June 2019.

Ms. Becker, who has a master’s degree in advanced talmudic studies from Yeshiva University, earned her law degree at the University of Chicago. After her aliyah, she worked at Jerusalem companies OurCrowd and Lightricks before Mr. Levy recruited her to be VP Legal at Alpha Tau in October 2020.

The technology behind AlphaDaRT initially was developed by professors Itzhak Kelson and Yona Keisari of Tel Aviv University. “The company’s technology is fantastic and unique and the people who developed it are passionate and intelligent,” Mr. Levy said.

Alpha particles are known to destroy tumor cells, but they can’t travel far enough within tissue to be a practical local treatment option. The Alpha DaRT technology aims to overcome this limitation by inserting small, extremely precise amounts of radioactive radium-224 affixed to metal sources into the tumor.

When radium-224 decays, it releases short-lived radioactive atoms that diffuse inside the tumor. These atoms emit a type of alpha radiation that seek to damage and kill cancer cells quickly.

“There’s a lovely Israeli aspect to what Alpha Tau does: Taking something that historically has been associated with fatal and devastating consequences — radioactivity — and transforming it into something potentially lifesaving,” Ms. Becker said.

“There’s a very Israeli, very Jewish, creative engagement with passion and brilliance. I’m profoundly grateful to be working with Raphi on something as noble than this,” she continued.

“We’re both extremely fortunate to have a CEO, Uzi Sofer, who is unrivaled in his indefatigability and in his ability to identify and pursue undiscovered, untapped opportunities in a world that is fast evolving.”

Mr. Levy said he finds it “exciting to work at a company that is making such a tangible impact on people’s lives. I’ve had the pleasure of speaking to some of our former patients and it’s been truly moving to see that people with no options or incredibly poor options available to them suddenly have something that is simple and gets the job done for them.”

Right now, the company’s main focus is on securing FDA clearance for the Alpha DaRT treatment.

“We’re actively working on that, as we wrap up one trial in the US and aim to start another one very soon. From there, our goal is being able to offer this treatment to patients in the U.S. and across the world,” Mr. Levy said.