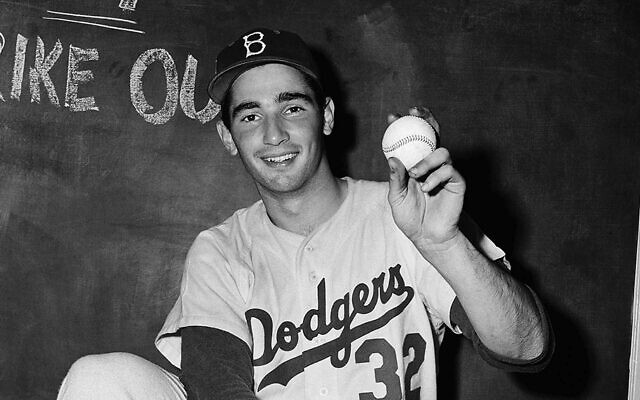 Sandy Koufax grins after striking out 14 batters in a game in 1955. (Bettmann/Getty Images)

If ever there was a Jew famous for one mitzvah, it is Sandy Koufax.

The Los Angeles Dodgers pitcher famously refused to play in Game 1 of the 1965 World Series, because it fell on Yom Kippur. (The Dodgers lost that game. The next day Koufax pitched, and they lost again. But the Dodgers went on to win the series, with Koufax as the lead pitcher for two of the four winning games — and Koufax picked up that season’s Cy Young award, as he had in 1963 and would again in 1966.)

But while Yom Kippur was his thing, graven images, it turns out — not so much.

On the afternoon of Shabbat, June 18, Dodgers Stadium will unveil a statue of Sandy Koufax, shortly before the team faces the recently renamed Cleveland Guardians. The first 40,000 fans to get to the 56,000 seat stadium for the game will get miniature replicas of the statue.

The Koufax statue is being crafted by artist Branly Cadet, whose statue of Koufax’s trailblazing teammate Jackie Robinson was erected at the stadium in 2017.

The Dodgers first announced the Koufax statue in 2019, with its unveiling originally planned for the summer of 2020.

Dodgers President and CEO Stan Kasten announced the new date this week. He said fans entering the centerfield gates now would be greeted by Robinson and Koufax.

“Not only are both of these Hall of Famers part of our rich Dodger history, they are also continuously inspiring sports fans everywhere,” Kasten said in his statement.

Koufax, now 86, became the youngest player to enter baseball’s Hall of Fame when he was inducted in 1972, at 36. That same year, the Dodgers retired Koufax’s jersey number, 32, alongside Robinson’s iconic 42, which is retired across the sport.

One of the best pitchers in baseball history, Koufax was a member of four World Series championship teams, winning two World Series Most Valuable Player awards. Koufax also won a National League MVP during his 12-year career with the Dodgers.