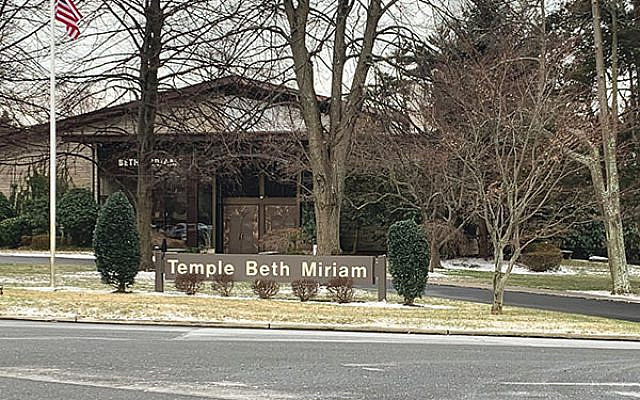 Temple Beth Miriam settled a lawsuit filed in Monmouth Civil Court by its former administrator in April 2018 alleging sexual harassment by a synagogue board member who, for a time, also served as her supervisor.

The administrator, Frances Langer, sued the synagogue; the board member and supervisor, Peter Grayson; synagogue rabbi Cy Stanway; three additional board members; and 20 individuals referred to as “John Does.”

The terms of the agreement are confidential and Grayson remains on the Elberon synagogue’s board. In an email to NJJN early in the case, attorney Michael Healey of Kluger Healey LLC, the Tinton Falls law firm representing the defendants, denied all allegations. Grayson subsequently hired a separate attorney.

“As many of you are aware, Temple Beth Miriam was involved in a lawsuit, which was recently settled.

Since the case was active, we could not discuss details. Please understand that the settlement is confidential.

Thank you for your continued support and faith in our temple.

I am available to all of you if you have questions or concerns.”

Neither was the settlement discussed at the synagogue’s annual meeting on Dec. 8, according to those in attendance. However, Bob Kellert, a long-time member who resigned from the executive board over the lawsuit and supported a group opposed to the synagogue’s handling of the harassment claims, said, “Great promises were made to keep moving forward and correct the errors of the past.”

Langer, who filed the suit, declined through her stepfather Leonard Berkeley to speak with NJJN.

Berkeley told NJJN that Grayson remaining on the board is “obscene” and added that Langer is “glad it’s behind her.”

The claims in the case, which settled Nov. 6, alleged that over a period of several months of Langer’s employment as assistant administrator, then administrator, at the congregation, Grayson repeatedly acted inappropriately toward her. Langer was employed at Beth Miriam beginning in January 2016. Grayson’s attorney has not responded to a request for comment, though Healey denied all the allegations when he was representing Grayson.

Among the allegations in the suit, she claimed he said she was a “shoe-in to be [his] mistress.” After hearing she had poison ivy on her arm, Langer claims Grayson told her his “brain was going crazy thinking about all the fun [he and Langer] could have rolling around in the bushes and getting poison ivy together.” She also claimed he spied on her using the synagogue’s security cameras and computer servers and made comments about his observations of her.

The lawsuit alleged that despite repeated complaints to the temple management, no appropriate or reasonable action was taken, and the action was “perpetuated, encouraged, and substantially assisted by Defendants.” She was told, the lawsuit alleged, that Grayson was “just socially awkward” and probably “didn’t even realize what he said,” and that because of his financial support of the congregation, Langer “would just have to learn to work with him.” Further, she alleged that the synagogue failed to train, discipline, or supervise its managers, and claimed the rabbi and members of the board had aided and abetted the discriminatory and harassing behavior and created or tolerated a hostile work environment.

Neither the rabbi, nor the president, nor any of the defendants’ attorneys responded to NJJN’s requests for comment.