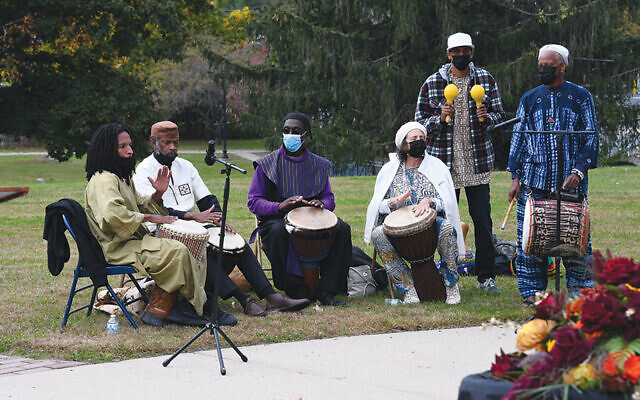 A drum circle, with Tyrone Laws at the left. (All photos by Barbara Balkin)

Earth is solid and real; it is also deeply metaphoric. When we throw soil into the ground after we bury someone we love, we are making statements and also evoking emotions and creating memories, tactile and visual and theoretical all at once.

So it’s not accidental that one way that the Montgomery, Alabama-based Equal Justice Initiative has chosen to bring to mind and commit to memory the victims of lynching is to gather soil from the place where the murder happened, to put it in a jar, to label it, and to display it. It’s bloodless, the soil is, but it evokes bloodshed.

It is perhaps surprising to learn that a Black man was lynched in New Jersey.

In 1886, near Eatontown, a 24-year-old white woman, Angelina Herbert, was raped. A 66-year-old man named Samuel Johnson but known as Mingo Jack was imprisoned. Mr. Johnson had been born into slavery on a plantation in Colt’s Neck. He had been a jockey — he was only about 120 pounds, reports say, and his nickname came from Mingo Chief, one of the horses he’d worked with. He worked at Monmouth Park Stables, and he lived with his wife and children. 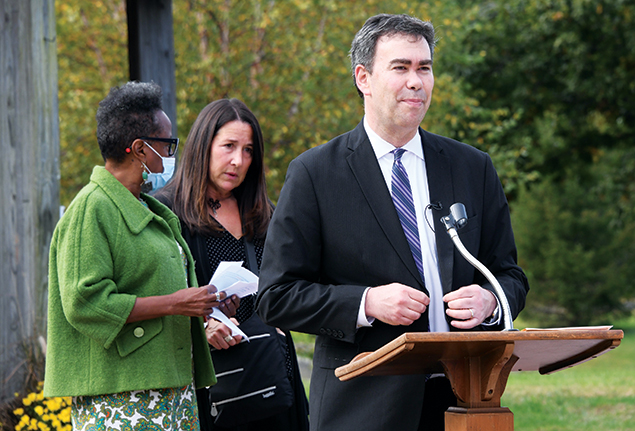 Rabbi Steven Sirbu speaks as Gilda Rogers, in green, and Shana Janoff, in black, look on.

That night, a mob of drunken men, estimated at about 75 strong, stormed the jail, pulled him out, tortured him, and killed him.

His murder did not go unnoticed; it was publicized, some men were arrested, and a local prosecutor worked hard to try to convict them. He failed. They remained free, and Mr. Johnson was forgotten.

The Equal Justice Initiative, which runs the Legacy Museum and Memorial in Montgomery, documents the American history of lynching as it advocates for equality in justice. The group believes it is vital to understand this history and to honor the memories of the victims of this horrific injustice.

The social action committee of Temple Emeth in Teaneck knows that. In 2019, a group of synagogue members took a trip down South, visiting the museum and memorial in Montgomery as well as other places dedicated to the fight for civil rights.

“One of the most moving aspects of the displays at the museum were collections of soil from lynchings across the country,” the synagogue’s rabbi, Steven Sirbu, said. “Each soil collection was in a jar, and each jar was labeled with a name, a date, and a location.” 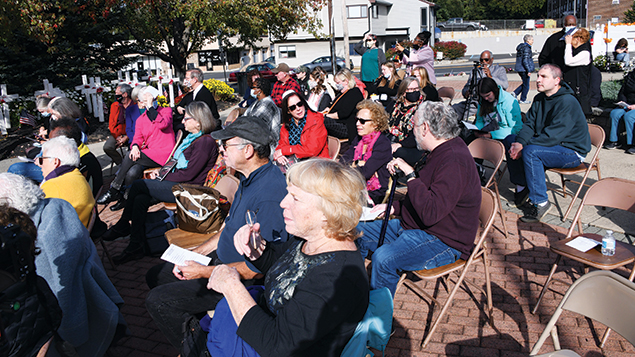 The crowd gathers for the ceremony.

Long after they returned home, the memories of that trip stayed with the committee members; its chair, Lynn Chaikin, who had gone on the trip with her husband, Steve, and another member, Shana Greenblatt Janoff, worked with the New Jersey Social Justice Remembrance Coalition and the EJI to create the soil collection project to honor Mr. Jackson.

“The coalition was formed about two years ago to work in partnership with the EJI both for soil collection and for the installation of a historical marker,” Rabbi Sirbu said. “Different communities do this in different ways” — there are many communities across the country that have seen lynchings — “but we decided to do these two things in two separate ceremonies. The marker will be installed in the spring — probably in June — and we did the soil ceremony last Sunday.

“There are other parts to the ceremony — an essay contest, an education campaign — and I was asked to be the chair of the committee in charge of the soil collection.

“The soil came from Wampum Park in Eatontown, from a corner of the park that is the closest we can access to the lynching site.”

And oh, Rabbi Sirbu added, while this was the only lynching recorded in New Jersey, just a few years later, in 1892, in Port Jervis, New York, not far away, another Black man, Robert Lewis, was accused of rape, captured, tortured, and then summarily executed.

After representatives from the EJI and local officials opened the ceremony, musician and spoken-word performer Tyrone Laws played a solo on an African hand drum, and actress Lorraine Stone read a monologue by the late 19th-century Black journalist and activist Ida B. Wells and a poem written by a woman who watched her own uncle be lynched, it was time for the soil collection. 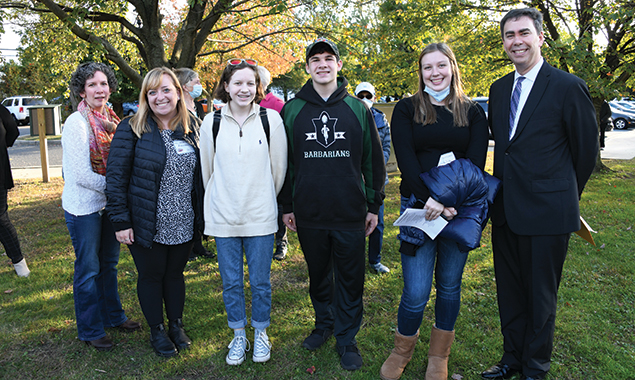 Before the ceremony began, committee members gathered soil and put it in a wheelbarrow. After it ended, participants took soil from the wheelbarrow and put it into one of eight jars that will be labeled with Mr. Johnson’s name and the time and place of his murder. One will stay locally, one will go to Montgomery, and the others will travel to displays around the country.

Earth carries the power of memory.

Barbara Balkin of New Milford had gone on the trip to Montgomery, and she went to Eatontown too. She’s a photographer, so she was able to watch with an artist’s eye, and to document what she saw.

“This was a culmination of our trip to the South,” she said “We saw the soil-collecting jars there, in Montgomery, so when we found out that this place in New Jersey was the site of a lynching, I felt that it was important to carry through with this project.

“It was well presented and very respectful. It felt like there were a lot of people there to show respect to the man who was lynched.”

It’s important to know our history, Rabbi Sirbu, Ms. Balkin, and the other Emeth members who went to Eatontown know. That’s how we honor the people who came before us, and it also is how we keep the terrible parts from happening again.