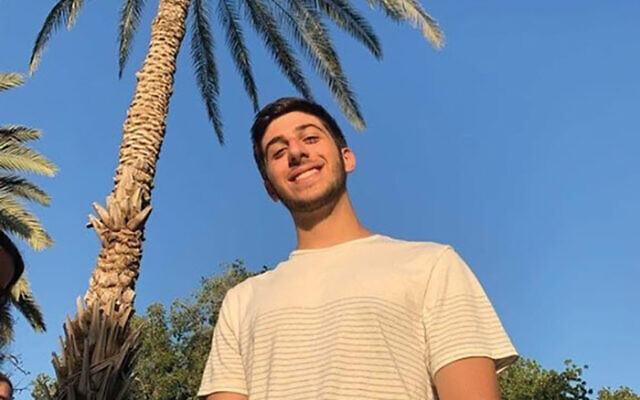 Adi David said he would rather be in Israel than at home in Livingston. “I love living in Israel,” he said. Photo courtesy Adi David

Lyndsey Lipson of East Brunswick was supposed to be busy doing volunteer work as a participant in Young Judaea’s Year Course in Israel. But now — due to the arrival of the coronavirus — most of the sites in Tel Aviv where volunteers are typically assigned have closed, so there’s not much to do. She and her peers have taken to calling the Zionist youth group’s program “Camp Year Course.”

This week, many programs in Israel involving high school and college students made the difficult decision to send students home, including Golda Och Academy’s semester-long program for its high school seniors, known as Neshama. Numerous yeshivot and seminaries in Israel also announced their closure.

Some, like the study abroad program at Hebrew University’s Rothberg International School and Young Judaea’s Year Course, remain open — but highly curtailed. They fall under the auspices of Masa Israel Journey, the umbrella organization for study abroad, internships, and Jewish studies programs in Israel.

Around 7,500 Masa Israel participants remain in the country. “We do not send our fellows back to their homes, and we actually work hard these days to find them safe, alternative activities,” said Masa spokesperson Oshrat Adler Eckhaus. Eckhaus said the organization follows instructions of the prime minister’s office and the Ministry of Health and has been in touch with parents “to reassure them” and answer questions.

Year Course participants have student, not tourist, visas so leaving the country was optional. Participants in the nine-month gap year program take classes in Jerusalem, volunteer in Tel Aviv, and tour the country.

As of March 16, about a dozen of the 80 or so participants headed home rather than staying until the scheduled end of the program in mid-May — it began in September.

Participants are no longer hanging out at public clubs and restaurants, travel plans around Europe and Israel have dissolved, and students, far more focused on cleaning their dorms than in previous years, are now limited to summer camp-style activities rather than independent college-type experiences.

“Tonight, we have karaoke. Last night was movie night. We’re also having color war in our dorm,” said Lyndsey. But despite the truncated schedule of events, she said, she is still grateful to be in Israel with her friends.

The teens’ parents have put their faith in the program.

“I have no doubts in terms of his safety,” said Jeffrey Doshna of Flemington, whose son, Benjamin, 19, is on the program. “Honestly, I think putting him on a plane poses more danger right now than staying where he is.”

Other parents view the current situation as just another facet of the experience. “Adi went to Israel to experience Israeli life, the good and the bad,” said Stacey David of Livingston, whose son is also on Year Course, now staying in the Jerusalem neighborhood of Baka. “Now, he will experience Israeli life in a different way.” She added, “I am sure that the decision to keep Year Course open is not simple, especially now that other gap year programs are shutting down. I am very grateful to the Year Course staff for keeping the program open.”

That doesn’t mean parents aren’t worried. “Whether she’s here or there, the risks are what they are,” said Sharon Lipson, Lyndsey’s mother. “We’re anxious about what’s going to happen if anybody there gets it, just as we’re anxious if anybody here gets it. We’re anxious, you know, wherever we are.”

In the meantime, the students are trying to keep their spirits up. They understand the gravity of the situation and are grappling with the unknown, but those who spoke with NJJN — via Facebook Messenger and WhatsApp — said they would rather be in Israel with their friends than home with their families.

“I’ll be honest,” said Adi David, who is attending classes via Zoom. “I was really having a hard time a few days ago. Everything was going downhill. But of course, I’d rather be here than at home. My best friends are here, and I love Israel, and I love living in Israel.” He acknowledged that it’s been hard to be so far from his parents. “But I definitely wouldn’t trade this experience, even during this quarantine.”

The Young Judaeans did acknowledge they are sad to miss out on some of the essential pieces that previous Year Course participants enjoyed: traveling with friends during spring break, surfing in Tel Aviv, participating in that sea-to-sea hike across Israel, and taking special art classes in Jerusalem. “All the things we were looking forward to have been cancelled,” said Adi. “I am having a really hard time. But it’s easier to be optimistic with friends, and I’m not going home. No way.” Both he and Lyndsey agreed that with all the emotions and uncertainty, having a few people around them who stay strong helps them keep a positive attitude.

“Once you get upset and negative, you just end up sulking and I don’t want to do that,” she said, adding that “it’s been weird slowly saying goodbye” to the students who have been leaving.

She also said she’s frustrated not knowing what the future holds. But she understands that during this pandemic, “there are no answers.”

Little disruptions to day-to-day life are also causing frustration — things like, according to Adi, running out of coins to operate the laundry machines and knowing that he can’t just hop on a bus to get some more. Lyndsey wondered how they would celebrate Passover.

And beyond it all, Lyndsey, Adi, and their peers still in Israel know that the decision to keep the program open could change at any moment.