Maybe there could be an organization with a more anodyne name than the Healthcare Foundation of New Jersey, but it doesn’t come readily to mind.

What is the Healthcare Foundation of New Jersey anyway? And why is there a story about it in a Jewish newspaper. (The Jersey part’s a little clearer.)

That’s because in fact, the foundation is a deeply Jewish one, driven by Jewish values, founded by Jewish philanthropy, guided by local Jewish history. Its logo is a Jewish star, made up not by straight lines but by stylized hands reaching out toward each other for help and for connection. Its tagline is “founded by the Jewish community.” Its history comes from its birth as the result of the sale of Newark Beth Israel Hospital — which was started as a place where Jewish doctors, rejected from older local institutions, could work their lifesaving trade — to the Saint Barnabas Corporation. Its goal always has been to apply the Jewish value of tikkun olam to repairing the world in general, and the multifaith, multiethnic, multigenerational world of Essex County in particular.

For the last 13 very successful years, the Healthcare Foundation’s executive director and CEO was Marsha Atkind; a few months ago, Ms. Atkind retired. Her successor is Michael Schmidt, a man whose background, interests, and family make him extraordinarily prepared for the job.

Mr. Schmidt grew up in Washington, D.C., the fifth of sixth children. His father, Manfred, escaped from Germany with his family in 1939, when he was about 5; his mother, Sarah Leff Schmidt, “unusually for that time, also had a Ph.D. in American studies, from the University of Maryland,” Mr. Schmidt said. (Did we just mention, a sentence or two ago, that she also had six children? Because yeah…) Manfred and Sarah met at Hillel at the University of Chicago, where both were undergraduates. Manfred Schmidt became a lawyer; he worked for the federal government, in the agency that supervised healthcare. But he’d developed diabetes when he was young, and that condition, which worsened over time, forced his retirement when he was in his 50s. “The story in the family is that when he was a child in Germany, waiting for a visa, the family was going to go to Palestine or America, depending on which one came through first,” his son said. That’s why the Schmidts came to America; either possible destination was a Promised Land, and the United States came through with a visa. “But my father always kept on wanting to go to Palestine,” Michael Schmidt said. “So my parents made aliyah in 1982.” Manfred Schmidt died in 1991; Sarah Schmidt, who had taught at the University of Maryland and was on the commission that founded the Holocaust Memorial Museum in D.C., remained in Israel after her husband’s death, teaching at the Hebrew University and Tel Aviv University. She died about two years ago, her son said.

Two of the passions that have been constant in Michael Schmidt’s life were strong forces in his parents’ lives — healthcare and Israel. 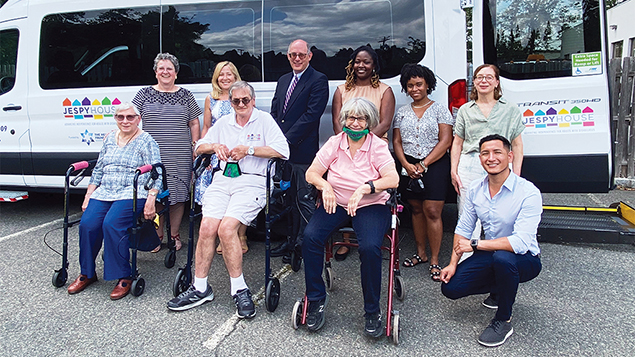 Michael Schmidt, who was born in 1965, shuttled between the United States and Israel during his high school years. “Because there was a very limited choice of Jewish high schools in Washington at the time, my parents sent each of the siblings to an all-Israeli boarding school for a year,” he said. “I went to Israel for 10th grade, did 11th and half of 12th grade at Berman” — that’s the Berman Hebrew Academy in D.C., which was brand-new then — graduated early, and went to Israel, to the Hebrew University.” He did a semester in college, and then went to Kibbutz Yavne, “picking cotton and doing all sorts of other things, like working in the hatchery,” he said. “It was formative.” Then he went back to college, armed with a set of unlikely new skills.

That’s where Mr. Schmidt first met Lori Skopp, who was a student at the Hebrew University then, and today is the head of the middle school at the Heschel School in Manhattan. Ms. Skopp, who’s been married to Mr. Schmidt for decades now, has deep roots in North Jersey. Her mother, Rosanne Skopp, is a columnist for this paper; Lori Skopp was in one of the earliest classes in what was then the Solomon Schechter School of Essex and Union and now is the Golda Och Academy. Lori and Michael shared the experience of being among their school’s pioneers. “We both had 12 kids in our high school class,” he said.

Mr. Schmidt served in the IDF for three years after he graduated from Hebrew University, with an undergraduate degree in social work. “I was the liaison between the IDF and the Egyptian forces,” he said. “We were trying to focus on peace in the region. It was an interesting time.” He and Lori soon married, traveled around the world, and then moved back to New York, where he enrolled at Columbia, working toward a graduate degree in organizational psychology. From there, he transferred to Fordham’s social work school, which allowed him to both work and study full time. His work was with seniors, work that he quickly realized he loved.

“When I graduated, I was offered an opportunity to head a homeless shelter on the Lower East Side,” Mr. Schmidt said. “It was unique, in that it was a transitional shelter to permanent housing.” That was in 1993; the George Daly House “is still around today,” he added. One of the shelter’s sponsoring organizations, the New York Foundation for Senior Citizens, offered Mr. Schmidt the chance to run its program, providing legal guardianship for adults with mental illness. He took that opportunity, ran the program, and soon became the foundation’s vice president. “It also has a range of programs to stop the premature institutionalization of senior adults,” he said.

After 15 years at the foundation, Mr. Schmidt went to the Council on Accreditation, a nonprofit that as its name implies accredits other nonprofits. “They work with 1,800 organizations across mostly North America, developing best practices and standards for nonprofit social service organizations,” he said. “I was the chief operating officer there.

“I was afforded an opportunity to develop a new program to accredit early childhood and afterschool programs for military families. I had known nothing about it — that was not my background — but I learned a lot about the military, starting in 2008.” (Of course, he’d been in the IDF, so it was not an entirely new world for him.) 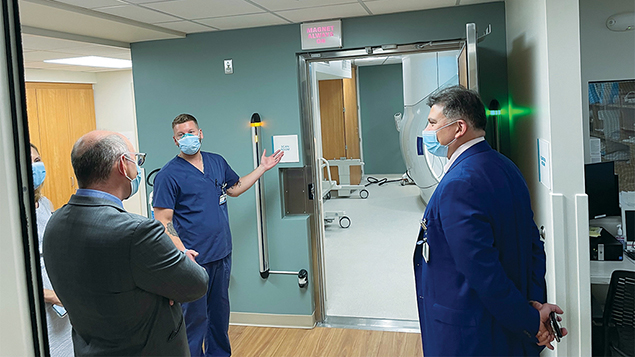 In 2011, Mr. Schmidt took on yet a new challenge. He became the director of the American Jewish Committee’s New York region; he’d resisted the idea of joining the Jewish nonprofit world, because his wife’s career was there, but eventually its call became too strong for him to resist. “So I helped revitalize the office, and expand diversity there,” he said. “We brought in people from outside Manhattan, people from different backgrounds.”

Mr. Schmidt also is on the board of the Gimprich Family Foundation, which “gives grants to Israel to help strengthen Israeli society,” he said. “They focus on religious pluralism.” In fact, he’s now the foundation’s president, the first non-family member to hold that position.

Mr. Schmidt spent a full decade at the AJC. His life was in Manhattan; he and his wife brought up their three now-adult children there, in an Upper West Side apartment. (Those three children are Adiel, 27, who is married to Matthew Weinrich; Amior, 25, and Maayan, 23.)

But then the pandemic struck, “and it gave me a lot of time to think.”

And then his friend Reuben Rotman, who went to the job he holds now, as president and CEO of the Network of Jewish Human Service Agencies, from the Jewish Family Service of MetroWest, where he’d been executive director, told him about a job opening. 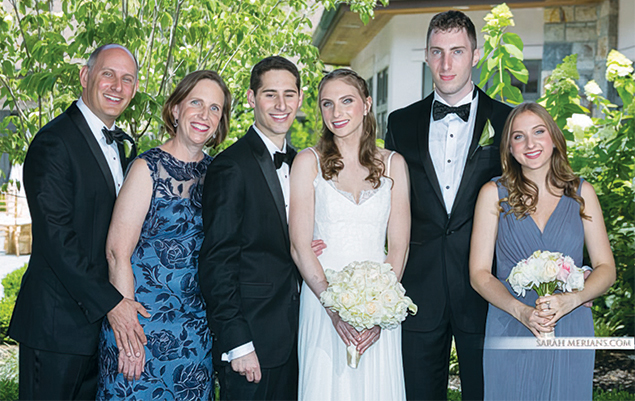 Michael Schmidt, his wife, Lori Skopp, and their children at Adiel and Matthew’s wedding.

“He told me that the CEO of the Heathcare Foundation of New Jersey was retiring, and they were looking for a new CEO,” Mr. Schmidt said.

So there it was. A chance to bring together all of his passions — the Jewish world, healthcare, pluralism, philanthropy. And right across the river, in the community where his wife grew up and his in-laws still live.

That was a little more than a month ago.

The foundation has been very active in providing grants as the community struggles with covid; it’s also looking ahead.

“This is a very exciting time,” Mr. Schmidt said. “The foundation is celebrating its 25th anniversary, and this is an opportunity to pause and reflect about where we want to go for the next 25 years.”

He talked about Trinitas Regional Medical Center, a Roman Catholic health-care system in Elizabeth that’s about to become part of RWJBarnabas’ network. There’s been a Jewish community in Elizabeth for a long time, but it’s growing now, and the hospital, working with the foundation, now has rooms that can accommodate observant Jews. That’s a good example of the kind of partnerships the foundation nurtures, he said. 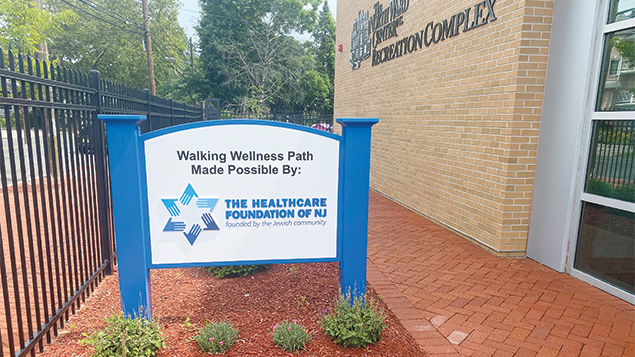 The Healthcare Foundation supports programs across Essex and much of Union counties.

The foundation’s work is by no means only aimed at Jews, though. “We are going to be thinking about different initiatives that will have an impact on Newark and the residents of Newark; we’re looking at how the community is changing, and what needs are for trauma related to covid. We’ll look at issues of aging, and aging in place.

“The Healthcare Foundation serves a wide swath of the community, but it is rooted in the Jewish values of tikkun olam and tzedakah” — the need to repair the world and to give to others. “We serve Jews and non-Jews, with an eye toward using Jewish values to inform the work that we’re doing.”

Amy Schechner of Short Hills is the chair of the Healthcare Foundation’s board; she’s a lawyer with a background in human rights.

“The Foundation is very excited to welcome Michael Schmidt in his new leadership role,” she wrote in an email. “We are already watching his passion and concern for understanding his role — to crystallize and galvanize the trustees and staff — and we all look forward to working with him to better honor the Foundation’s commitment to provide quality healthcare services to the communities we serve.

“The trustees like where the Foundation is but want to take it to the next level,” she added. “We are not looking for someone to shake the trees, but rather someone who would sway the trees.”

Given his extensive background, and this new opportunity to use it all at once, to combine all of the wisdom and experience he’s gained across the many fields in which he’s worked, it’s easy to think that those trees will sway.