Not everyone is lucky enough to combine their personal passion with the ability to help others. Lily Schonbraun of Short Hills is one of the lucky ones.

A sixth-grader at the Newark Academy, Lily, 12, a member of Congregation B’nai Jeshurun in Short Hills, will become a bat mitzvah in October. Knowing that she wanted to combine her love of tennis with her desire to give back to the community, she chose to organize and run a tennis fundraiser for her bat mitzvah project.

The event, which raised more than $32,000, will benefit the Greater Newark Tennis & Education Program at Orange Lawn Tennis Club. The nonprofit organization offers both tennis instruction and — through its partnership with Seton Hall University — educational services to children in the Greater Newark Area. This summer, Seton Hall will send some of its own students to help youngsters who fell behind during the pandemic. The program is offered free at the Althea Gibson Tennis Center in Newark’s Branch Brook Park, through a partnership with Essex County.

“Ever since I was little” — in fact, Lily has played since she was 3 years old, and today is a nationally ranked competitive player — “tennis has been such an important part of my life and something that I have always been so passionate about,” she said. “I have learned so much about the game, and more importantly, the life lessons that have come out of the game.” Now she wants to share those lessons with others.

“One hundred percent of the money collected will go to GNTE,” Lily continued. “I realize how fortunate I have been to enjoy tennis lessons and the opportunity to play every day, so I was really excited to be able to help other kids share that experience.”

The fundraiser itself was a joyous event, Lily’s mom, Erin, said. “It was a beautiful day, and coming off the pandemic, everyone had fun, and for a great cause. It was a win-win.” 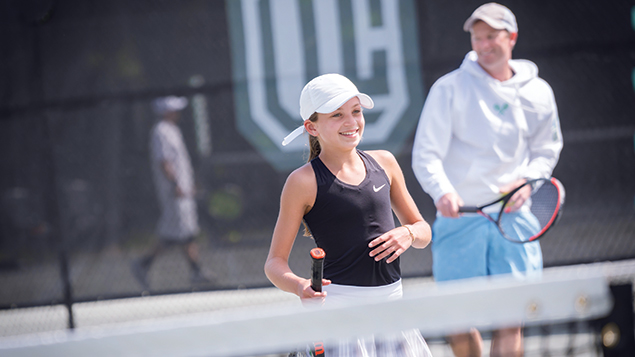 Lily and her father

The event included a warm-up clinic in which 60 children participated. It was run by Orange Lawn coaches Michael Thompson, Asim Sengun, and Yhonny Murray. That was followed by a tournament for parent/child doubles, in which 32 teams participated. Lily and her father, David, comprised one team. Her mother and her 9-year-old brother, Sam, made up another. Her 6-year-old brother, Harrison, sat this one out.

Organizing the event “was a lot of work, but it was fun,” Lily said; it took her about six months to arrange it , and the feedback has been extremely positive. She is no stranger to hard work, she said; being all-in on a project is one of the lessons she’s learned from the game. “I also learned about winning and losing, discipline, and that hard work pays off,” she added.

Lily knows that her bat mitzvah project was a bit unusual. “A lot of the students choose to fundraise for food pantries,” Ms. Schonbraun said. “Or they collect items and organize drives. They also do walks for a disease.”

“I knew I wanted it to involve tennis,” Lily said. “And I knew a lot of people would participate.” She sent notice of the event to friends and family and posted it on social media.

Lily hopes that tennis will remain part of her life, and she dreams of playing the game in college. Still, like any almost teenage girl, “I also love to hang with my friends,” she said, adding that she continues to meet people and make friends, through the game.

“I’m really proud of her,” her mom said. “She took on a lot of ownership of the project and getting people to participate. She also learned about the organization, and we visited the Newark kids we’re supporting. It was a great experience.”