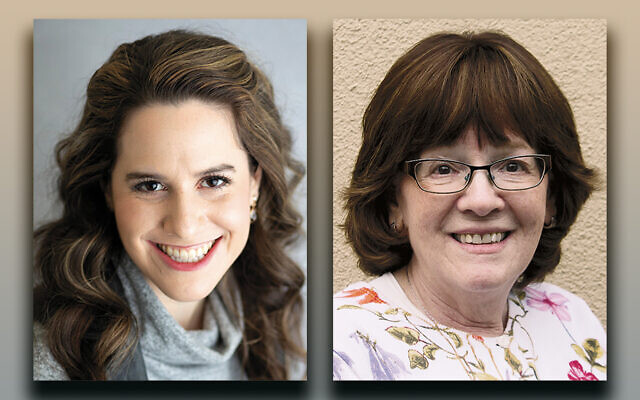 The pandemic sent everyone but essential workers home last March. It’s a virus. It didn’t care that although it was consigning most people to boredom, weight gain, and a short-term flirtation with sourdough starters, it was dooming others —those who have to contend with domestic violence — to increased danger.

Those people who contend with domestic violence or sexual abuse, which might or might not be at the hands of someone who lives in the same house, include Jews, despite the Jewish community’s frequent reluctance to admit that it could be possible.

But “people are people,” as Elke Stein of Teaneck, a social worker who was the longtime director of Project SARAH and now is its clinical supervisor, said.

Project SARAH — its name is an acronym for the descriptive if unwieldy Stop Abusive Relationships At Home, and it is supported by private donations, by Jewish Family Service & Children’s Center of Clifton-Passaic, and by the state of New Jersey — treats people all around the state, for free.

As Project SARAH prepared for its annual breakfast, its most important annual community fund-raiser, online instead of in person for a second year (see box), its leaders considered where this year has brought them.

As the pandemic began, Ms. Stein and Shira Pomrantz of Clifton, now Project SARAH’s director, said, calls to the agency began slowing down. “We had very little intake,” Ms. Pomrantz said. “And then, around May, we began to notice an increase. There were more and more calls, to the point, in January of this year, we had doubled our intake compared to the pre-pandemic numbers.” She’s counting clients who were able to get individual therapy, group therapy, or other resources, including shelter, from or through Project SARAH. Numbers have continued to increase, although not at the same rate.

Project SARAH, like other agencies, has developed ways to help their clients, who often need more help because of the pressures the pandemic has brought. They have to worry about money, about jobs, about children, about coping. They may have little or no privacy, no place to run, no place to hide.

“We have developed different ways to reach out to clients in this new virtual world,” Ms. Pomrantz said. “We have developed support groups that can go online and function online. That has been an incredible way to keep in touch with clients, and to keep our support of them continuous.

“We see that the pandemic has created more complex issues,” she added. “The clients are experiencing the same issues as before, but with more complexity.”

“Clients sometimes call us from their cars, because that’s the only way they can get any privacy,” Ms. Stein said.

Although both Ms. Pomrantz and Ms. Stein have been working from home since the pandemic closed their office in March 2020, the office since has reopened. But changing CDC guidelines and shifting covid outbreaks have had it opening and closing a few times over the last few months. “We have clients who come to the office for safety and privacy,” Ms. Pomrantz said. “They sometimes join their virtual session from our office. Their therapist is at home, and the client was in the office. It’s a safe space.”

No one knows what the pandemic’s long-term effects will be, but “it definitely has affected children and their treatment more than adults,” Ms. Stein said. “It’s very hard to do Zoom with kids. Those therapists who are seeing a lot of kids are being encouraged to come back to the office.” 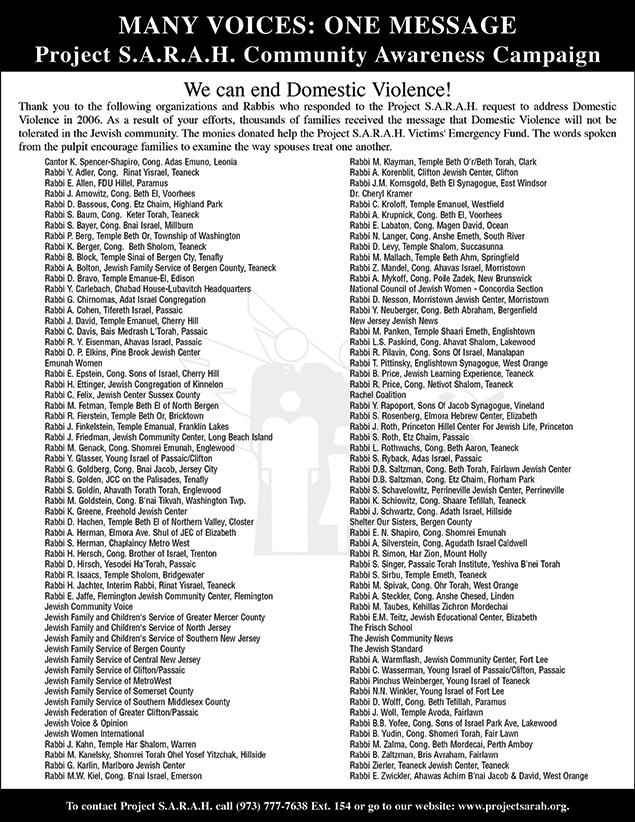 This is the ad that Project SARAH ran in the Jewish Standard in 2006.

On the other hand, Project SARAH is able to reap one benefit from the pandemic — the benefit that many organizations have found. It’s able to overcome geographic hurdles. As a partially state-funded agency, Project SARAH’s theoretical mandate is to deliver its services statewide; until recently it’s largely been limited by how far clients are willing or able to drive to its office in Passaic. Now that almost everything is online, space has been conquered.

But state funding might become an issue. As the need for therapeutic services for their clients continues to grow, Ms. Stein and Ms. Pomrantz fear, based on credible reporting, that there might be fewer state resources available. It makes sense — pandemics are jaw-droppingly expensive, and there is a limited amount of money to go around. But it makes their other sources of income even more vital.

“We are never not available. And we continue to need the support of the community in order to continue.”

Project SARAH is marking its 25th anniversary this year. Ms. Stein, who began her work with the agency as an intern in 1997, when it was just a year old, remembers how the campaign to raise awareness of the problem of domestic abuse in the Jewish community began.

Esther East was the director of Jewish Family Services at the Jewish Federation of Greater Clifton/Passaic when she founded Project SARAH. “She created a magnificent organization that was a hand reaching out to people in need,” Ms. Stein said. “She wanted to make sure that anybody who needed our services was aware of the fact that we were there.”

It wasn’t easy convincing the Jewish community that domestic abuse was a problem. But Ms. East and her colleagues knew that they could make great inroads by convincing the community’s leaders. She started with rebbitzens, because she knew that women would go to rabbis’ wives with their most sensitive, private problems. (To be clear, not all victims of domestic or sexual abuse are women — many men and boys also suffer from those scourges — but most of them are.) The rebbitzens were able to tell their husbands about the issue; once the couples were at work together, they could start to chip away at some of the stigma that kept victims quiet.

Thirty rabbis signed up for the first advertisement that Project SARAH put in this newspaper, about 15 years ago, to mark Domestic Violence Awareness Month. (It’s every October, and the ad has become annual.) “I almost had to go door to door to meet the rabbis, so they could see who I was and trust me, to get them to sign,” Ms. Stein said. “Today, we have rabbis running after us, saying ‘Don’t forget to put my name in the ad, and please be sure you spell the name of my synagogue right.’” In 2020, 133 rabbis signed the ad.

“It is so amazing, looking back to see how much Project SARAH has been able to tackle awareness, prevention, and training,” Ms. Pomrantz said.

“And penetrating the issue of denial,” Ms. Stein added. “There has been a huge shift in that. The community is so much more open and supportive.

“There is a huge amount of shame related to domestic violence and sexual abuse. Some people say that there is a veil of silence over it. But the whole climate has changed.”

“Once a person sees that she is not the only one to affected by it, not the only one struggling with it, when you see that someone else faces the same thing, it’s so much easier to say me, too. There is less shame and stigma attached,” Ms. Pomrantz said.

“When I started doing this work, women were coming to me and they would think that they were on the only person in the world dealing with this issue,” Ms. Stein said. “I would tell them that they were not, and that would be a comfort to them.”

“The way people’s minds work, they think that if this is happening only to me, there must be something wrong with me,” Ms. Pomrantz said. “So to know that I am not the only one is remarkably powerful. A person who is affected by domestic violence shouldn’t feel that she’s the only one to be affected by it. Someone who is the survivor of childhood sexual abuse should know that unfortunately there are many people in that situation.

“They are not alone.”

What: Has its annual breakfast; for the second year, it’ll be online.

Why: To help the organization raise the funds it needs