Starting late last week, people out walking on Broadway on Manhattan’s Upper West Side might have noticed a new message on one of the ubiquitous LinkNYC digital billboards.

It’s light in tone, nonconfrontational, and hot pink. And it’s about anti-Semitism.

(It’s hard to know how to describe the LinkNYC constructions, or even what noun to use for them, to people to haven’t seen them. They’re like shorter fatter lightbulb-less lampposts, or maybe taller thinner waterless hydrants. They provide passersby with WiFi and a place to charge their phones, and more importantly, they give advertisers a place to put digital ads.)

“Let’s ask everyone who is wondering if antisemitism is real to wear a yarmulke for a week and then report back.”

The ad is signed jewbelong.

Archie Gottesman of Summit is one of the two cofounders of JewBelong.

It’s an organization aimed at those Jews who feel that they do not belong; that somehow they don’t know enough, believe enough, fit in enough. Until now, it’s been aimed at showing those Jews, and the non-Jews who care about them, the joy and love in Judaism, but now, all of a sudden, something else is getting in the way

Anti-Semitism is becoming unavoidable, Ms. Gottesman said. “The anti-Semitism is just not to be believed. I’m on social media a lot, and I see it’s really tough.”

JewBelong has used LinkNY’s digital billboards before; the organization has posted snappy, irreverent, eye-catching questions about Jewish practice. Ms. Gottesman and her partner in JewBelong, Stacy Stuart, founded it to draw people into Jewishness, using, among other tools, the meme-making talents they’d developed as the writers for Manhattan Mini-Storage, whose startling, funny, I-can’t-believe-they-wrote-that (and sometimes they-are-so-entirely-right!) ads have caught people’s eyes for two decades by now. (Manhattan Mini-Storage is one of Ms. Gottesman’s family’s businesses.) 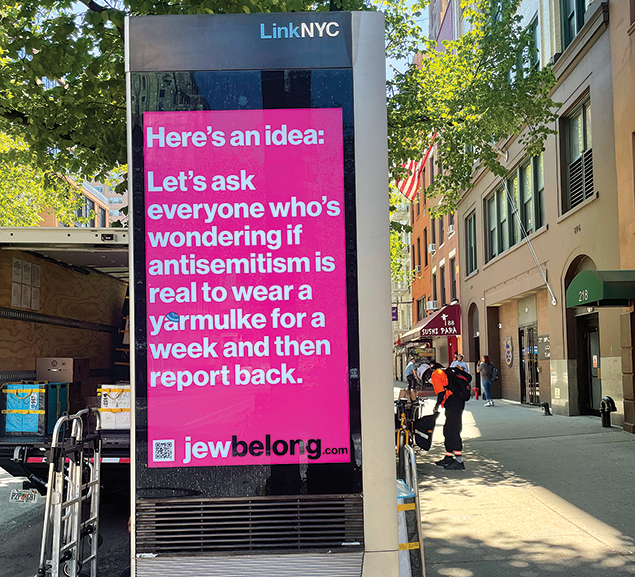 JewBelong’s LinkNYC advertisement shows up all over Broadway.

The two women didn’t think, though, that they’d have to use their well-honed skills in creating viral messages and memes not to draw people in but to help them stay safe.

Ms. Gottesman marvels at the need for such a billboard. “We try to intellectualize everything,” she said; the “we” here is Jews. “We look at all sides of everything. But sometimes hate is just hate.

“We have the instinct that it really can’t be that bad. But right now, it is that bad. We are wrong. That instinct is wrong. It is just terrible.”

Because digital media move so quickly, there was very little time between when she realized that there was a need for the sign — that was at a Shabbat dinner when another guest, in response to a story about anti-Semitism, said that he hadn’t felt anything himself and so he thought that things couldn’t be so bad — and the LinkNYC’s messages. Because, she repeated, things really are so bad.

JewBelong also responded to the rise of anti-Semitism by creating what it calls the Jewish Partisan Prize. It’s named after the Jewish partisans who fought in the forests of Central and Eastern Europe during World War II. “Today, the fight looks different, but the antisemitism is the same,” JewBelong writes in describing the partisan prize. “The hate and misinformation against Jews and Israel is overwhelming. We are grateful to the brave social media influencers who are working day and night to call out antisemitism and protect Israel’s right to defend herself. They are making a difference but like back in the 1940s, the enemy is enormous.

“A few influencers reached out to us privately to tell us they feel lonely, exhausted, furious, and scared. We wanted to do more than commiserate, and suddenly, the Jewish Partisan Prize was born. We tried to pick the voices who seem to be mostly independent people working their asses off in the fight against antisemitism. So far, we have awarded the $360 prize to 23 young peace warriors! And we’re going to keep going because these young people need to feel supported!”

But there’s a bad, sad twist to this story. JewBelong posted photos of the young influencers they’d recognized as partisans, “and within minutes one of them asked us to delete the post,” Ms. Gottesman said.

“She loved the recognition, but many of the partisans are literally receiving death threats. She said that having all of their photos in one place made them too easy of a target.

“We took it down, but the fact that people who speak out against anti-Semitism are threatened on a regular basis is even more proof — as if we needed it — that the Jewish community has a lot of work to do.

“I desperately want to be able to go back to JewBelong’s mission, which is about the joy of Judaism, about welcoming people who might feel to Jew-barrassed to come in,” she continued. “That’s where we really belong. That’s where we do the most good. But it’s a vicious circle. If people hide away because of anti-Semitism, then we — JewBelong — won’t have any audience. We have to do this because otherwise our audience is busy hiding.

“If you only know Judaism as the thing that makes your friends hate you, if it only means something negative to you, then you’d have to be crazy to be Jewish. We are all attracted to things that fill our souls and give us joy.”

That’s why JewBelong fights; that’s why it uses the tools that are available in this time to fight the anti-Semitism that has re-arisen in this time.

And that’s why Ms. Gottesman, Ms. Stuart, and JewBelong believe that although the anti-Semitism that’s rampant now cannot and must not be ignored, in the end the joy will win.