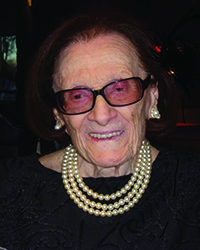 Vera Kutcher Schapps, 106, of New York City died April 24, 2020. She had been a longtime resident of South Orange. A Hunter College pre-med graduate at the age of 18, Mrs. Schapps pursued a career in retailing.

During her life, she experienced being quarantined during the 1918 Spanish flu pandemic, attending the World War I Woodrow Wilson victory parade, and serving as a World War II air raid warden in New York City. She received (and framed) a letter celebrating her 100th birthday celebration from President Barack Obama.

Memorial contributions may be made to The Jewish Museum, New York City.