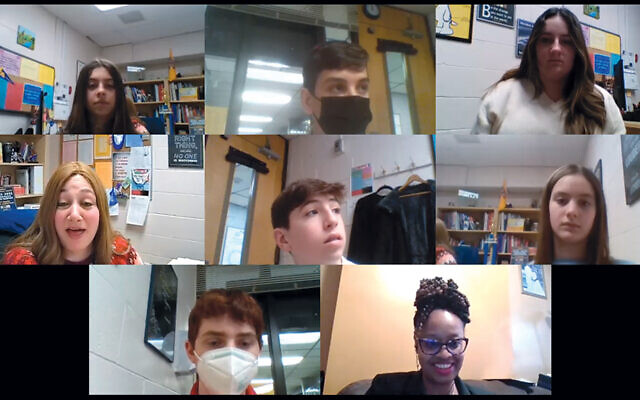 Students from the Moriah School in Englewood speak with Assemblywoman Angela McKnight.

It was a mixture of lobbying and civics lessons at Teach NJ’s lobbying day last week, conducted over Zoom.

Nine hundred students, along with some faculty members and Teach NJ board members from more than a dozen Bergen County Orthodox Jewish schools and a few other Orthodox schools from across the state, including the Jewish Educational Center in Elizabeth, took part, as did 19 state legislators.

In a pre-recorded video describing the goals of the OU-founded organization, which advocates for funding for nonpublic schools, Maury Litwack, the executive director of the Teach Coalition, said that since its founding in 2013, “Teach Coalition has delivered close to a billion dollars in government funding to Jewish schools.” The Teach Coalition encompasses Teach NJ and its fellow state-based organization, including Teach NY.

In New Jersey, the organization has seen a significant increase in state aid, and comments from some of the legislators indicated that the upward trend will continue. The budget proposed by Governor Phil Murphy, a Democrat, would boost per-capita aid for school security from $175 to $185. By contrast, in 2015, Governor Chris Christie, a Republican, had proposed cuts in state aid to private and religious schools. The state legislature ultimately rejected those cuts.

Katie Katz of Teaneck, Teach NJ’s executive director, talked to the students about her memories of her first lobbying experience. She was a student at the Frisch School in Paramus then, 20 years ago, and traveled to Washington, D.C., as part of a mission by NORPAC, the pro-Israel political action committee.

“To be honest, I don’t remember many things that I learned in middle school or high school,” she said. “But that experience had an enormous impact on me. I may have been a kid, but the legislators and their aides listened carefully to what I had to say.

“If you can remember one thing from this experience today 20 years from now, I hope it’s this: You have a voice. You have the power to impact real change, to improve lives for yourself, your family, and your community. Don’t forget that responsibility.”

The actual lobbying took place in Zoom breakout rooms, where a classroom of students engaged directly with a legislator. That included talking about what they wanted from the government on behalf of their schools. But it also provided a chance to get to know state senators and assembly members. One question they frequently asked: Where did the legislator feel they had made the most impact?

Assemblyman Gary Schaer (D.-36 Dist) of Passaic pointed to two initiatives. One was the security funding for nonpublic schools. “We have security at a higher level than we did before,” Mr. Schaer, who is the only Orthodox Jew in the state legislature, said. “New Jersey has the highest per student funding in the nation, for a total of $26 million a year. Knowing that all students are secure in school is one of my greatest accomplishments in the legislature.”

The other “is a bill which we just passed a few months ago to examine all of the water lines in the state,” he continued. “New Jersey is an old state, and many of our structures receive their water in old pipes.” Old pipes frequently are lead pipes. The bill “allocates about $2.3 billion to ensure that all lead pipes are replaced throughout the state. Lead never leaves the system, it only builds up, and it is a critical cause of emotional and mental instability. So I am extraordinarily excited about that bill.”

Assemblyman P. Christopher Tully of Paramus (D.-38 Dist) spoke with student from Ben Porat Yosef in Paramus about bill he had worked on to enable the state to help local communities and organizations compete for federal grants, and to enhance safety on school buses.

Students from the Frisch School in Paramus meet with Senator Joseph Lagana.

Senator Joseph A. Lagana of Paramus (D.-38 Dist) spoke with students at Frisch. He talked about one of the side effects of increased safety requirements — difficulty in recruiting bus drivers. That problem has been exacerbated by the pandemic and older people’s resulting reluctance to risk exposure to the viruses by being around school children. Bus drivers often are retirees.

“We’re looking at ways where we can entice people to become bus drivers,” Mr. Lagana said. “We really need to take a 30,000-foot approach with how we make our busing system a little bit better.”

Speaking to Teach NJ board members and other adults in a separate session before the students joined the teleconference, Mr. Schaer quantified the problem.

“Bus drivers who were making $15 or $16 an hour are now making $25 or $30 an hour,” he said. “That’s going to raise prices up. It is a critical problem, made even more critical in the sense that many public school districts are in the same boat you’re in, where they’re looking for transportation aid and can’t find it. I’m hopeful that we’re going to be able to get something done in this year’s budget.”

Mr. Lagana said his path to Trenton began when clerking for a Superior Court judge in Hackensack.

“He really kind of mentored me and said, ‘You should pay attention to what’s going on around you. There’s always a handful of people who make all the decisions that affect us all,” Mr. Lagana recalled.

So when he finished his clerkship, when he was 25, “I started getting involved locally,” he said. “I called my local mayor in Ridgefield and asked if I could be involved. And he appointed me to the rent control board and the planning and zoning board. It was probably about seven or eight years of volunteering on various boards and commissions, getting to know the government. And when I moved to Paramus, there was an opportunity to run for the local council.

“I worked my butt off and knocked on doors, I got to talk to residents and understand what the issues were. And I got elected.”

He told the students that they should start getting involved when they’re young. “Vote,” he said. “You’ve got to vote. You’ve got to show your strength.”
(Citizens can vote when they are 18.)

“I’m 43. And you guys probably think I’m old, but I’m the second youngest person in the New Jersey Senate. I work with people who are literally twice my age. They were in the Senate before my parents even care here from Italy — that’s how long they’ve been there.”

He recommended elected office to the teens as “very rewarding. You have to learn to understand and respect everybody for who they are and what they are.”

He thanked them for educating him about the needs of their school.

“Without your advocacy when it comes to things like security and nursing funding, I would have no clue that that was even necessary.”

And he suggested that it might be time to expand the ways the state supports those schools. “Direct funding, when it supports technology as an area of study, is a road we should go down,” he said.

He said that “my parents taught that I needed to give back to the community,” Mr. Umba said; his father is a third generation volunteer fireman.

Mr. Umba was very sympathetic to the needs of the yeshiva students, because he went to Catholic parochial schools before going to the Catholic University of American in Washington, D.C.

“I benefited from the special services teachers that the school district would send to my Catholic school to provide me with additional institutional learning while I was going to school,” he said.