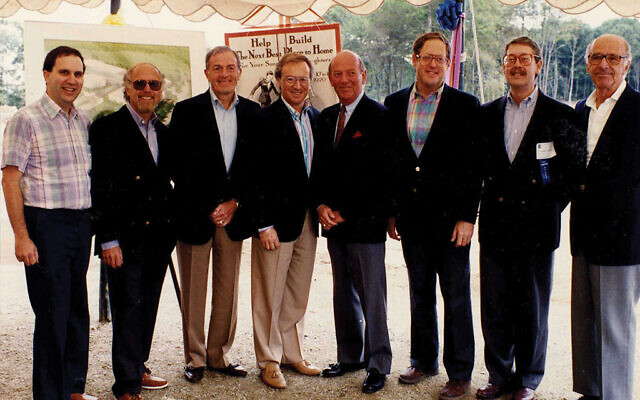 We all shared a collaborative mindset that made each of us better and made that team the best it could possibly have been. All with the backdrop of Ron’s insights, his jokes, his open-door policy, and big-hearted approach to everything he did…. His voice will long be remembered, and the contributions he made to the Jewish people and community are invaluable.” — Susan Levine, former director of marketing, United Jewish Federation of MetroWest

“As Ron rose through the ranks of Jewish organizations, those he worked for, those he worked with, and those who worked for him were enveloped in his genuine dedication and attention to detail to the specific tasks on hand, and his very real ability to share his enthusiasm, making all involved work seamlessly together. He wanted to not only get the job done well, but to make all around feel good and get better while doing it.” — Andy Frank, former director of budget and planning, United Jewish Federation of MetroWest

Susan and Andy were but two of several of Dr. Ron Meier’s former colleagues to offer their recollections of their friend. Others remarked that the years working with him were the most fulfilling of their careers, a reflection of Ron’s engagement with colleagues, lay leaders, and the community at large.

Having come from a background in academia and tenure as Hillel director of the University of North Carolina, Ron was a fanatical fan of Duke basketball (despite the bitter rivalry between the schools), but in his professional life he was calm and measured. His accomplishments as associate executive director of what was then known as the United Jewish Federation of MetroWest were many.

In collaboration with legendary demographer Gary Tobin, Ron was the key professional to work on federation’s 1984 demographic survey, the previous such study having been conducted in 1947. This was a massive undertaking and the results served as a guide to planning for the local community’s education, social services, and philanthropy for the next decade.

Ron was the key staff planner for the development of the Alex Aidekman Family Jewish Community Campus in Whippany. Richard Slutzky, the federation’s former foundation director, remembered Ron “most vividly running our campus meetings dealing with construction, infrastructure, phones and technology, space planning, interagency planning, library, etc. It was an endless series of decisions which he masterfully built consensus around with professionalism and a sense of humor.”

He cared about the communal field and mentored many professionals. As president of the New Jersey Association of Jewish Communal Service, Ron led efforts in continuing education and addressing important issues facing the community. He also served on the national board of the Jewish Communal Service Association of North America, where, at the behest of its then president, Max Kleinman, chaired the committee which surveyed the membership, guiding the direction of the Association.

Fluent in Hebrew, Ron helped build our relationship with Israel, develop overseas programs, and direct federation’s annual allocations process. His beloved wife, Rabbi Joyce Raynor — who, with their daughters Rachel Meier and Jessica Werner, and grandchildren Mia and Blake survive Ron — was an accomplished professional leader in her own right, having headed the Golda Och Academy in West Orange for over a decade in addition to serving in numerous other positions at the school.

When Kleinman served as federation’s associate director he — along with Howard Charish, CEO of United Jewish Federation of MetroWest from 1982-1995 — hired Ron as planning director and played racquetball with Ron at the JCC for many years, albeit with limited success. His instincts for planning extended to the game, and he had an uncanny ability of knowing where the ball would bounce before his turn to hit it. And within 15 minutes of Kleinman announcing his decision to leave his post to become the executive director of the Minneapolis Jewish Federation, Charish hired Ron to succeed him. It was a “no-brainer,” Charish said.

Charish reflected that “as our team was forming and ramping up, someone approached former federation president Horace Bier and asked him how Charish was doing. He replied that he didn’t know about Charish, but he sure hires crackerjack staff” — referring to Ron and his colleagues.

“This crackerjack staff developed an organizational culture built on mutual engagement, embracing the mission and the work, and Ahavat Yisrael,” Charish continued. “When the culture is strong you can trust everyone to try to do the right thing. As Teddy Roosevelt remarked: ‘Far and away the best prize that life has to offer is the chance to work hard at work worth doing.’”

Ron was the glue who helped bind us together toward achieving our communal vision and goals. This sense of camaraderie and shared vision serves as a guidepost for Jewish Federation of Greater MetroWest New Jersey to this very day, building on his decades-long legacy.

May Ron’s family be comforted among the mourners of Zion and Jerusalem, and may his memory be for a blessing.