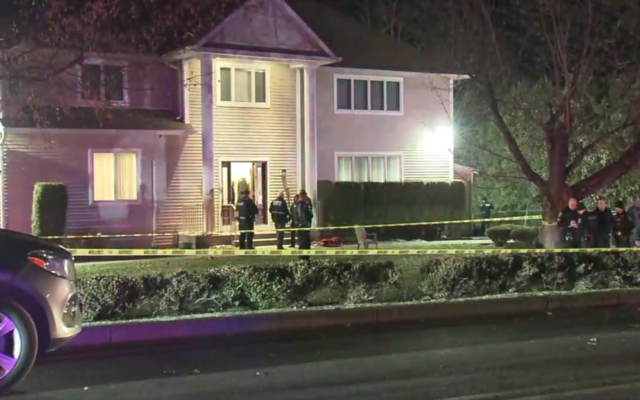 Police outside a rabbi's home in Monsey, N.Y., where at least five people were stabbed, Dec. 29, 2019. Screenshot from WABC/JTA

In the three weeks between the deadly shooting at a kosher grocery in Jersey City and a vicious home invasion in Monsey, N.Y., on the seventh night of Chanukah, there were 11 recorded violent attacks on Jews and their institutions in the New York area. In most of these, identifiably Orthodox Jews were punched, slapped, chased, or threatened with a weapon. This tally doesn’t include the graffiti and incidents of verbal harassment, like the thugs who taunted cast members on the street after a recent performance of the Yiddish production of “Fiddler on the Roof.”

The fear engendered by this epidemic is real and understandable. In Orthodox neighborhoods, children tell their parents they worry about going outside. Wives warn husbands not to wear their kippot on the streets. Synagogues are wondering if it is time to train a volunteer cadre of armed congregants.

For many, the attacks have shredded their faith in the American enterprise. On social media, users wonder if the safety and welcome Jews have felt in America was a short-lived experiment, and whether the current crisis suggests that, as history tried to warn us, Jews can never be safe in the diaspora. Reacting to the Monsey attack, the head of Israel’s Yisrael Beiteinu party, Avigdor Liberman, declared that “the main solution to such phenomena is immigration to Israel.”

Immigration to Israel should be encouraged on its own merits, but the deep despair over the wave of anti-Semitism is a misreading of history and the present reality. The attacks are vicious and unacceptable. But societies turn inhospitable for Jews not when street thugs turn violent, but when authorities and law enforcement either stop caring or encourage them. The “American experiment” is not over when top elected officials direct efforts to combat anti-Semitism, and when leaders of all faiths gather to condemn bigotry and defend their Jewish partners.

All that has happened during the current wave. In the wake of the recent murders in Jersey City, Gov. Phil Murphy said he commits “to take every step possible to keep our residents safe.” Attorney General Gurbir Grewal wrote a five-point plan for fighting hate and anti-Semitism.

Nationally, the response from politicians has been heartening. Statements of support have been overwhelming and bipartisan. President Donald Trump denounced the attack and called on the country to unite in battling anti-Semitism.

That doesn’t mean that authorities can’t or shouldn’t do more, or that they haven’t failed some of our communities in the past. There is still too much tolerance for those who deploy anti-Semitic rhetoric. But as bad as the past weeks have been, actions and statements by leaders offer assurances that Jews are not alone, and the bigots have been given no sanction. We have the tools, courage, influence, and allies to get through this.