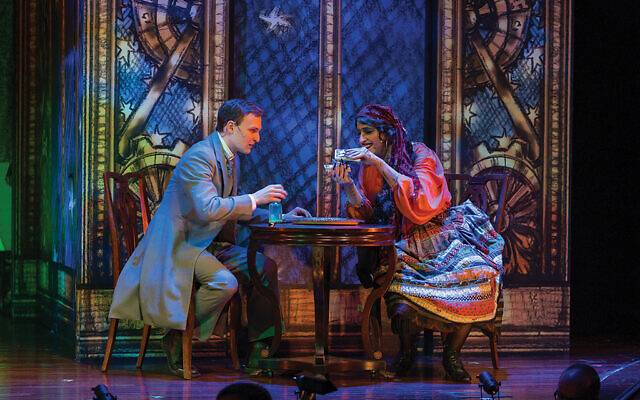 Marcus (Josh Kohane) and the sorceress, Bobbe-Yachne (Mikhl Yashinsky), confront one another in “The Sorceress.” Photo by Victor Nechay-Properpix.com

This wonderful Folksbiene production of the classic musical “The Sorceress” is a revival of the very first Yiddish theatrical piece that was presented in the United States, in 1883. The original Yiddish title is “Di Kishefmakherin,” literally “the woman who makes magic.” And, rather than a musical comedy, the playbill calls it a “musical fantasy.”

In any case, it is important to know that the author, Avrom Goldfaden (1840-1908), is considered the father of Yiddish theater. The Russian-born Goldfaden received a thorough Jewish education and wrote poetry and song lyrics in Hebrew and in Yiddish. It was from his Yiddish songs — for which he often provided the tunes and for which he mounted rudimentary performances, using actors — that Yiddish theater developed.

By 1880 Goldfaden already had a troupe of actors — many of them wandering minstrels and cantors’ assistants — performing in Russia and Romania. But in 1883, the czarist regime, fearing the popularity of this new mass medium, banned Yiddish theater in Russia. This prompted many actors to migrate to other lands. Yiddish theaters were soon opened in London, Paris, and New York, where mamaloshn-speaking immigrants thronged to see performances in their native language.

In 1887, some of Goldfaden’s colleagues who had already come to New York invited him to join them in the United States. He came, but, overshadowed by more prolific producers, he was not successful. He returned to Europe and for the next 16 years continued to create, produce, and direct Yiddish shows successfully. He returned to the United States in 1903 (the same year Sholem Aleichem first came to these shores) and remained here for the next five years, until his death, at age 68, in 1908. He was widely revered as the seminal figure in Yiddish theater.

The fact that Folksbiene is reviving the popular “The Sorceress” is itself significant. This staging combines both a tribute to one of Yiddish theater’s enduring musicals and provides new audiences with a sentimental look at Yiddish theater’s past. It is also noteworthy that the subtitles are both in English and Russian. In fact, both before and after the matinee performance I attended, the language I heard most was — Russian.

“The Sorceress” has all the ingredients of a typical Yiddish show for the masses: a romantic plot, lots of songs and dances, a change of locale to an exotic site, and a happy ending. This play is the first fully restored work of the National Yiddish Theatre’s Global Restoration Initiative, through which neglected Yiddish operettas, musicals, and plays are sought in archives and libraries all over the world. For instance, the libretto of “The Sorceress” was found in the Yiddish Book Center in Amherst, Mass., and its score, based on piano-vocal sheet music, was located in the Library of Congress. Hand-copied orchestrations came from YIVO’s Theater Library in Vilna, whose collection was looted by German forces during the war, and returned to YIVO in New York in 1947. These pages are part of the famous “Paper Brigade” in Vilna’s ghetto, where Jews risked their lives under the Germans to save items, including the sheet music for this play, that they thought were important for Jewish history.

“The Sorceress” contrasts the relationship Mirele, whose mother has just died, has with her new, mean stepmother, Basye, and Mirele’s fiancé, Marcus. Alone after Mirele’s father, Avromtshe, is accused of some unknown crime and taken away, Mirele is made a virtual house slave by Basye, who calls upon the sorceress Bobbe-Yakhne (a role that was usually played by a man) to assist her in getting rid of Mirele.

We see Bobbe-Yakhne’s cauldron and hear and see lots of spells and witches’ dances. Mirele is sold to a man from Istanbul — providing the audience with an opportunity to take in exotic music, belly-dancers, acrobats, and other musical and dance treats. (Goldfaden would later remark, “I wrote ‘Di Kishefmakherin’ in Rumania, where people, Jews and non-Jews alike, believe strongly in witches.”) It is in Istanbul that, incredibly, we see Mirele reunite with her fiancé, Marcus, and learn that Mirele’s father has been freed. Now all are back home and Bobbe-Yakhne and the wicked Basye want to do them in. But, as one expects in any musical, the heroes are saved, the evil ones are done away with, and a typical Yiddish musical wedding provides the happy ending.

Unlike some of the classic Yiddish films, where Jewishness/Yiddishkeit fills the story, in this fantasy the only Jewish link is the language itself and the characters’ Yiddish names. True, at the wedding, the hero steps on the traditional glass to the shouts of “Mazel tov,” but if this play were to be translated into, say, French or Italian, hardly a Jewish remnant would remain.

The entire production is superior theater. The sets, costumes, choreography, acting, and singing all blend beautifully. Artistic and musical director Zalmen Mlotek has assembled a talented cast, including Mikhl Yashinsky (a man) as Bobbe-Yachne, Steve Sterner playing the merchant Hotsmakh, Rachel Botchan in the role of Basye, and Josh Kohane and Jazmin Gorsline as the romantic leads, Marcus and Mirele.

At the museum, patrons can dine at the kosher, dairy Lox Café, with its delicious and imaginative menu offerings, including various types of home-cured lox, specialty herrings, borscht, blinis, and freshly baked babkas. The show and the restaurant ingeniously bring together the cultural and the culinary arts.

“The Sorceress,” a musical comedy by Avrom Goldfaden, restored and reconceived by Zalmen Mlotek, Motl Diner, and Dmitiri Zisl Slepovitch, is presented by the National Yiddish Theatre Folksbiene at the Museum of Jewish Heritage: A Living Memorial to the Holocaust in Manhattan (through Dec. 29). Visit mjhnyc.org or call 866-811-4111.

Curt Leviant, a New Brunswick resident, writes frequently about Yiddish culture. He is the author of 10 critically acclaimed and internationally translated novels. His most recent fictions are “Kafka’s Son” (2017) and “Katz or Cats: Or, How Jesus Became My Rival in Love” (2019).