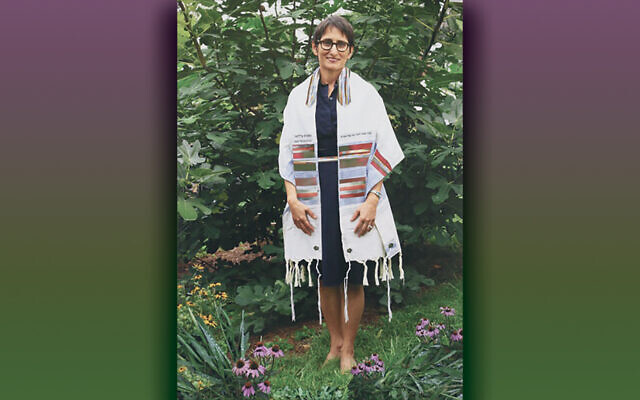 Rabbi Andrea L. Weiss is pictured in “Standing Firmly in her Garden,” 2021, by Debbie Teicholz Guedalia.

The exhibition, organized in partnership with the Braid, illuminates the creativity, commitment, and vision of 24 women who were firsts in their time. Their challenges and contributions, struggles and successes, represent the achievements of all the 839 women rabbinical graduates of HUC-JIR in North America and Israel to date — and the nearly 1,500 women rabbis of all movements who have transformed Jewish tradition, worship, spirituality, scholarship, education, and pastoral care.

On June 3, 1972, Jewish and American history was made when the Hebrew Union College-Jewish Institute of Religion ordained Rabbi Sally Priesand, and she became the first woman rabbi in North America. She was a pioneer who opened the way for generations across all denominations and around the globe, with steps toward inclusion, diversity, equity, and empowerment.

Now, 24 leading contemporary Jewish women artists who immersed themselves in their rabbis’ recorded interviews, which were produced by the Braid’s “Story Archive of Women Rabbis” and preserved at the Jewish Women’s Archive. The artists’ insights, empathy, and broad array of aesthetic approaches capture the essence of these trailblazers’ identities and consecrated paths.

Among the artists is Debbie Teicholz Guedalia, a photographer from Demarest, who was paired with Rabbi Andrea L. Weiss, pictured, the current and first woman provost of a Jewish theological institution — she’s at HUC in New York. The photographer has focused on Jewish themes over the last 40 years. Five international museum collections hold her work, and she has showed at the Bernard Heller Museum several times. She is a member of Congregation Beth Sholom in Teaneck. Her portrait of Rabbi Weiss appears to be a seamless photograph, but it is a photo collage. Rabbi Weiss wears the tallit that she wore for the first time when she ordained. In the photo Ms. Guedalia has covered the tallit with appliquéd photos of artifacts that connect Rabbi Weiss to HUC, such as Yaakov Agam’s Torah ark from the Petrie Synagogue there , and green flowers from Andrea’s Russian stacking dolls. A text from Deuteronomy 32:2-3, which she finds meaningful to her, “ May my teaching drip as the rain, may my words flow as the dew,” is superimposed on the screen.

Debbie Teicholz Guedalia is an active member of the Jewish art salon and the American Guild of Judaic art.