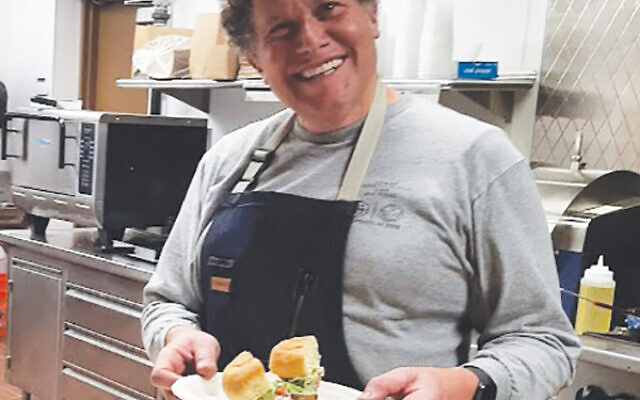 The new College Avenue Café at Rutgers Hillel introduced Avi Weisel to the “fat sandwich.” The renowned university sandwich is comprised of various ingredients stuffed into a bun. In this case, it was a veggie burger, French fries, and a variety of condiments.

“It’s my first time eating one of these and it’s really great,” he said. “Everything we’ve had has been excellent.” Weisel and his wife Pearl live in Brooklyn and were in New Brunswick to visit their daughter Adina, a freshman at Rutgers University.

“The food is delicious,” said Pearl. “It’s nice to have a kosher place on campus to go to when we visit our daughter.”

Hillel’s College Avenue Café had a soft opening on Dec. 10 and plans to be fully operational in the second half of January, in time for students’ return from winter break.

“We wanted to open now so the students could have a little something to eat as students are studying for their exams,” said Shirley Poliker, Hillel’s catering manager. The café is under kosher supervision of the Orthodox Union.

In addition to the café, the university’s dining services is now selling packaged Fresko-brand kosher sandwiches, under Star-K supervision, at some of its cash operations on the New Brunswick and Piscataway campuses, according to spokesperson Neal Buccino. Roasted vegetable salad wraps and turkey sandwiches are available at Café West on the College Avenue campus, and students on a university food plan can purchase these sandwiches for $7 or with a swipe of their meal card.

The College Avenue Café replaces Bistro 70, a dairy café that had been at Rutgers Hillel since the building opened in 2017. The caterer moved its operations to Congregation Sons of Israel in Manalapan after Hillel made a “business decision” to switch its kosher supervision from Star-K to the Orthodox Union, according to Hillel executive director Andrew Getraer.

In the new year the café will offer meat and dairy catering and will be available for corporate functions, according to Poliker. Getraer said weekly free Shabbat meals, which had been supplied by One Stop Kosher market in Elizabeth, will now be prepared in the building’s meat kitchen by Rutgers Hillel Dining Services.

The meals, which include free Friday night dinner to more than 300 students, are paid for by the Jewish Federation in the Heart of New Jersey, Jewish Federation of Southern New Jersey, Wilf Family Foundation, synagogues, and private donors. The remainder of the costs are paid out of Hillel’s operating budget, Getraer said.

Poliker, who was trained at the French Culinary Institute in New York, said the café will offer global cuisine. “We are going to start making many different things from outside our own ethnic backgrounds, but everything will be made fresh,” she said. For example, the café’s manager, Uriel Nicolas, will be introducing dishes from his native Mexico.

Poliker’s culinary background is eclectic. She trained at Nobu, a Japanese restaurant in Manhattan, and worked at a tapas restaurant in Tel Aviv. She worked at Hillel’s previous café.

Currently on the menu are freshly made pizzas, hummus, falafel platters, Beyond Burgers, a variety of salads, vegan options, and soups, such as vegetable with matzah balls.

For students who eat strictly kosher, the university’s kosher meal plan is operated by Rutgers Chabad. Approximately 150 students participate, according to the coordinator of Chabad’s meal program, who declined to give his name. Rutgers Chabad is affiliated with Chabad of Central New Jersey and is not a part of the Rabbinical College of America, the N.J. headquarters of the Lubavitch movement.

In line with the university’s dining policies, each student on a 225- or 255-meals per semester plan is allowed 10 guest meals each semester at no additional charge, according to Richard.

Rutgers Chabad also offers free Shabbat meals to students that are subsidized by Chabad and a donation from the Jewish Federation in the Heart of New Jersey.