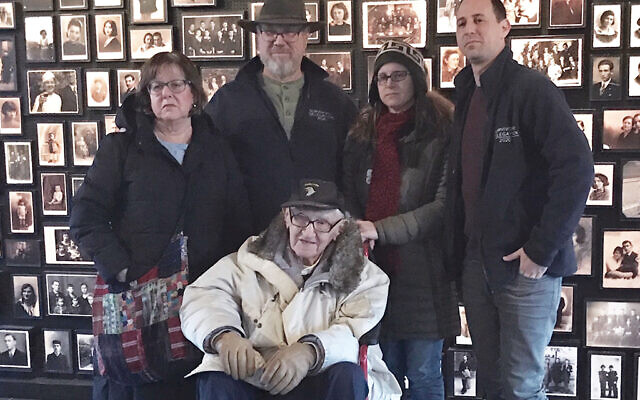 Standing behind Cantor David Wisnia in Auschwitz-Birkenau’s “sauna” building are his son Rabbi Eric Wisnia and family, wife Judith and children Sara and Avi. As a prisoner, David worked in the delousing facility; today it is an exhibit hall at the Auschwitz Museum. Photos Courtesy Avi Wisnia

Cantor David Wisnia has returned to Auschwitz five times since his internment there, most recently for the 75th anniversary of the camp’s liberation in January. “Every time you go back, you feel like you’re back home — believe it or not — whether you like it or not,” he said.

In an interview at his home in Levittown, Pa., upon his return, he said going back to the camp is “affirming that I am alive, that I managed to survive that atrocity.”

This anniversary visit the cantor was joined by his son, Eric, rabbi emeritus at Congregation Beth Chaim in Princeton Junction, and his wife, Judith, and their children, Sara and Avi. Cantor Wisnia said he and others realize the most recent ceremony at Auschwitz will be the last major commemoration that will draw any sizable number of those who suffered as inmates. “Now we still had a few survivors who were prisoners who can relate details, but there won’t be anymore,” he said.

Avi, a singer, songwriter, and pianist who lives in Philadelphia, was also at the interview. During the visit to Poland, he accompanied his grandfather to a concert at the POLIN Museum of the History of Polish Jews, in Warsaw. He said he and his family went to Poland to support each other and make sure his grandfather had another opportunity “to tell his story in his own voice.”

But it was more. “For a long time under the Nazi regime, my grandfather experienced a lot of horror and torture, but also loneliness because he lost his whole family,” Avi said. So it was particularly meaningful for his family members to be there, “and for him to know he will always have his family, and we will always be there for him.” Wisnia’s wife, Hope, died in 2018.

Before the celebration, Wisnia told his family, “My grandchildren are the proof that Hitler did not succeed.” That, Avi said, “was what being there as a family meant.”

Wisnia, born in 1926, grew up in a well-to-do family in the Warsaw suburb of Sochaczew, and during the trip to Poland he and the others stopped at their former residence, 17 Staszica St., to say Kaddish. Wisnia’s father, who owned an upholstery shop in Warsaw, was an opera buff; he expected his talented son to become an opera singer and, in fact, bought David a tuxedo at age 9 to wear to a live performance.

The family moved to Warsaw in 1937, and when the ghetto was formed in 1941, they were able to stay in their apartment, which fell within its boundary. Perhaps “by premonition,” Wisnia said, his father sent him to the Okecie Airport in his place to clean an office. When he returned, he found his whole street had been blocked off “because they found a gun on my father” — who, Wisnia thinks, “must have been part of the underground.” His father, 41, mother, 37, and 13-year-old brother had been shot and killed.

Wisnia escaped with the help of one of his father’s non-Jewish workers, then moved from place to place. His luck ran out in 1942 in Nowy Dwor, a town under German control, where he was searched and, because he had no papers, was put on a train, among 1,500 people, to Auschwitz.

In the camp, Wisnia said, “my job, because I looked strong and I was strong, was to carry the dead bodies of people who had committed suicide — all they had to do was go in the ditch next to the barbed-wire fence and a guard would shoot them. I would collect them, put them in a wheelbarrow, and they would burn the bodies.”

But during the second week of his internment, someone yelled out, “Wisnia sings.” The Germans heard, and were interested. “I became slowly a privileged prisoner,” he said. “I entertained them at their drunken parties on occasion, and I got a plush job in what was called ‘the sauna,’ [where] those destined to live were deloused.” 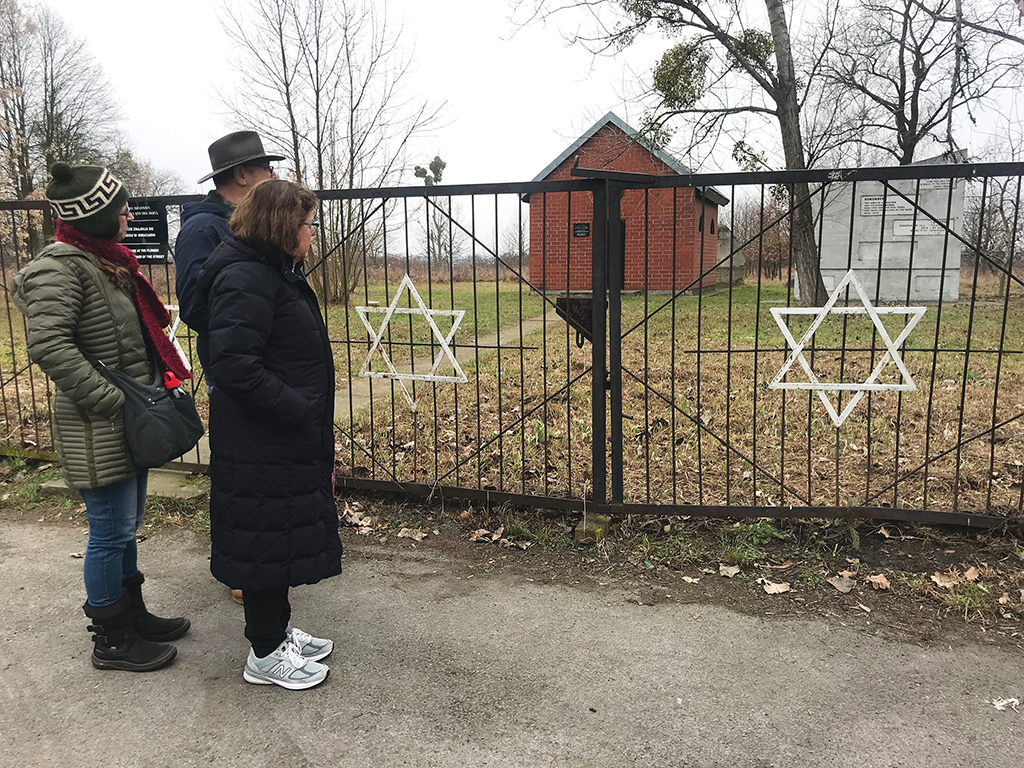 Outside the Jewish cemetery in Cantor David Wisnia’s hometown of Sochaczew, Poland, are his family members Sara, Judith, and Eric Wisnia.

Avi first visited Auschwitz with his grandfather in 2003, when he turned 21. “It was the first time I heard his whole story from beginning to end,” Avi said. Before that, the family “knew these little scenes,” but not the details of his survival or what happened to his family. In Wisnia’s 2015 memoir, “One Voice, Two Lives,” he at last shared his full story. Avi also accompanied his grandfather to the 70th liberation commemoration.

On Wisnia’s first trip back to Auschwitz, in the early 1950s, he carved his name on the bunk where he had slept for two-and-a-half years; he was sorry he was not able to see it again on this trip. “That was my home; it was where other people were murdered, and I remained alive,” he said.

The trip held some surprises, one having to do with a story Avi had heard since he was young — that his grandfather had once spent three months in a penal colony because he overslept and missed a Sunday morning roll call. What amazed Avi was having the head of the archives at Auschwitz present his family with documents that described that punishment. “To have proof not only that this story happened, to have the date, to see it in black and white, was really stunning,” Avi said. “It shows you the twisted attention to detail that the Germans had.”

Avi also noticed a difference in Poland’s Jewish landscape on this trip. During his first two visits, he said, “It seemed like the Jewish Poland that my grandfather knew was dead — successfully destroyed by the Nazis and really erased. It was devastating and sad.”

But on this trip he was heartened. “We actually went to Shabbat services with a budding Jewish community in Warsaw, Beit Warszawa,” Avi said. That evening David, Eric, and Avi Wisnia helped lead services. Rabbi Eric gave a sermon about what it meant to him to be back in Poland. His father led Torah study, and Avi played music while everyone sang and danced.

“To see my grandfather’s face as we were doing Israeli dancing and to be in a community and praying together and singing ‘Hinei Mah Tov’ in the same tunes as we would in America and in Israel — to feel that solidarity was amazing and uplifting,” Avi said. “It makes you feel hope that there were Jews and there was Jewish life in Poland and not everything was erased. They tried to erase everything that was, but some of it lives on.”