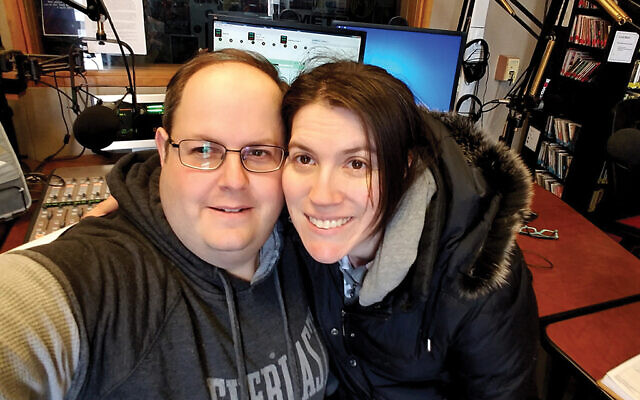 Josh Shron and wife Mairov Dubrovsky have co-hosted Israel Hour Radio — 60 minutes of Israeli folk and rock music — since 1994 when they were both students at Rutgers University. Little did they know when they first volunteered to host the Sunday morning radio show that aired on the school’s FM station, WRSU, that they would end up committed to each other, and to 25 years of the program.

“It was a humble beginning,” said Shron, of East Brunswick, who is also the founder and president of Stampless Marketing, an email marketing agency. Dubrovsky is a realtor at the Leora Dubrovsky Realty Group in Howell. “The show had run since 1976, and had some listeners in Central Jersey, but that was it. I really got interested in both radio and Israeli music when I was at Rutgers and, in a big way, I’m glad Mairov and I are still involved.”

The show airs live on 88.7 FM at 11 a.m. on Sundays, and listeners can also tune in at myisraelimusic.com or subscribe to the Israel Hour Radio podcast.

“What has happened in radio and how people can listen is exciting,” said Shron. “We can be heard all over the world at any time a listener wants … We have podcasts. We’re on apps like TuneIn. We hear from listeners in Europe, in Israel.”

In addition to listeners now being able to access the program through modern technology, the WRSU studios were renovated in 2019 and upgraded to state-of-the-art production facilities. “It’s not just the old board with dials anymore,” Shron said.

The show’s mission is to introduce listeners to the joy and complexities of Israeli music. “You don’t have to be fluent in Hebrew to become an Israeli music fan,” Shron said. “You just need to close your eyes, soak in the sounds, and imagine you’re sitting in a café in Tel Aviv. Next thing you know, you’ll be hooked.”

On the show’s website Shron blogs about Israel’s top artists and how they affect the mood of the country. For instance, he praised “Shevet Achim Ve’achayot,” Israel’s top song of 2019, for “uniting the country in song on the eve of its 71st birthday.”

Shron told NJJN, “Perhaps what I enjoy the most about present Israeli music is how it gives you the feeling of being there and identifying with the nation of Israel and the blending of secular and religious.”

In celebration of 25 years on the air, the couple, who have five children, is planning “My Israeli Music Experience” — a musical tour of Israel to take place Aug. 4-14. The itinerary includes attending live concerts; meeting with celebrities in the Israeli music world, such as the Shalva Band and Hadar Marks, a DJ at Israel’s music radio station Galgalatz; and recording a live broadcast of Israel Hour Radio. Information on the tour may be obtained at myisraelimusic.com/tour.

“Summer is an amazing time for concerts in Israel,” Shron said. “You sit under the stars, singing at the top of your lungs with thousands of Israelis. It’s magic.”