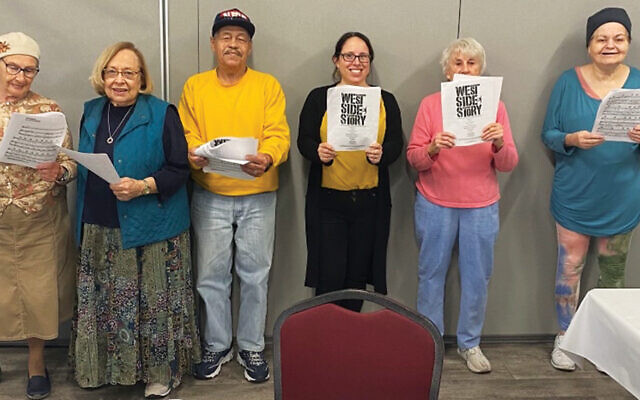 And they’re doing more than just watching. Club members have been offering their own critique of some films that panned by critics but well-received by audiences back in the day. Movies like “Casablanca” and “Apocalypse Now.”

The film critique program, “The Stuff that Dreams Are Made Of,” is part of the arts programming at Club Sequoia, started in mid-January and will end in early March. The instructor, Jenny Psaki — and no, she’s not the White House press secretary; she’s the Psaki who’s a member of the Screen Actors Guild and a graduate of the NYU School of Fine Arts — talks about how to dissect a film and write a critique every Wednesday at noon. Each one of the eight sessions has a name. In “Irreverent Comedies,” for example, Club Sequoia critics talked about the fine line between funny and offensive.

Club Sequoia began with an earmark — according to a Google, an earmark is a Congressional directive that funds a specific project — that Representative Bill Pascrell (D-Dist. 9) facilitated in 2005, creating a Naturally Occurring Retirement Community in the Clifton/Passaic area. A NORC is designed to allow residents who are 60 or older to age in place in their own homes as long as possible. NORCs can provide a broad range of social and health services.

As part of the earmark, JFS Clifton Passaic’s leaders picked three apartment buildings in the two towns for their project. That choice was based on two factors —residents of those buildings said that they were interested in being part of the program, and each of the buildings had recreation rooms to host activities.

Next, JFS designed a range of services for this NORC. The agency also brought people from the buildings to the now-defunct YM-YWHA on Scoles Avenue in Clifton, which was a typical JCC. It offered weekly water aerobics, current events discussion groups, and such low-barrier-to-entry exercises as tai chi. JFS held parties during the year for Jewish and legal holidays. Clients came from many different ethnic group; there were Chinese, Indian, and Hispanic participants, all meeting under Jewish auspices.

The NORC was designed to last for 20 months. Afterward, JFS sought state, private, and matching funding in order to keep funding coming and the program going.

The program achieved one of its main goals — the opportunity for participants to socialize. People who lived in the three buildings had not necessarily known each other before the program started. Many had spent their days and nights alone, behind the doors of their own apartments. The program brought them together.

And it didn’t end there.

The NORC became the precursor of Club Sequoia, which moved with JFS from the JCC to a synagogue in Passaic, Adas Israel. It is now based in JFS Clifton Passaic’s offices, at 111 Main Avenue in Passaic.

Club Sequoia Center is run by JFS’s director of senior services at JFS, Pearl Ricklis; Shaina Bodenheim, who is Club Sequoia’s director of programming and arranges lectures, seminars, and workshops, and operates everything on Zoom; and on-site coordinator Sarala Katz.

Arts programming at Club Sequoia is just one of many services JFS Clifton Passaic offers seniors. There’s exercise, like tai chi, and there are stimulating lectures. “Every Wednesday we have a current events study group and the people who participate come from so many different backgrounds,” Ms. Bodenheim said. “It’s a great thing when you have opinions coming from people who hail from so many different cultures.”

Club Sequoia offers tips for self-care, and will even help a client with a problem for which JFS doesn’t offer a service. When Gerry Kelly of Clifton had a problem with his laptop, JFS helped. “The tech people at JFS were super fantastic, fixing it for me,” he said. “They were very kind with the time they gave me so I could have my computer back again.”

JFS closed its doors at the start of the pandemic; it was necessary to protect its clients’ health — but the isolation that resulted was harmful. Ms. Ricklis, who lives in Elizabeth, has worked at JFS for 27 years. She knows a great deal about the mental health issues that can result from isolation. Club Sequoia’s programs can help.

Among the benefits that the club offers, “Socialization may be the most important,” Ms. Ricklis said. “You can be stimulated reading a good book alone at home but still be lonely. Being alone impacts mind, body, and spirit and can lead to depression.

“Depression is a terrible thing,” she added. “Socialization offsets the impact of depression on the mind and the body.”

JFS was able to offer some services virtually, but not all of them. “As time went on, it became very clear to us that our seniors were in a high-risk situation,” Ms. Bodenheim said. “The problem was that in order to keep them physically safe by closing our doors, we were putting them in a situation that adversely affected their mental health. Looking back at these last months when so many were stuck in their apartments, we saw how that led to depression, anxiety, and cognitive impairment.”

The clinical staff at JFS knew that they had to open up their building to clients as soon as possible. Still, they were surprised when their clients told them what kind of programing they wanted. “They felt inundated with programs about health issues,” Ms. Bodenheim said. “They told us there’s more to us than just health issues. We want to have a good time, and not always be thinking about the next hospital trip.”

Beginning in June, JFS opened its doors one day a week. Now, the center is open three days a week.

In the early fall, JFS received a grant for arts programming from the Wallerstein Foundation for Geriatric Improvement. Its funds can and will be used throughout 2022 to produce seven arts programs.

The film critique program group was the first of the seven. “The underlying purpose of the grant is to see if this type of programming contributes to the evidence we have already seen that seniors improve, socially, emotionally, and even physically, when they participate in arts programming,” Ms. Bodenheim said. “Upon the completion of these programs, Club Sequoia will turn over our evidence to the foundation. It will be interesting to see their conclusions.”

There are two other arts programs now running that are being paid for from the Wallerstein grant. “Anyone Can Sing,” a women-only program that runs on Thursdays at 11:15 a.m., will go through March 24. As its flyer ask: “Have you ever been told you have a voice of gold? Or that you should stick to singing in the shower?” It’s for all those women, and it’s taught by soprano Mara Adler O’Kelly, a vocal educator from the Garden State Opera.

There’s also the eight-week program, “Back to the Catskills: Discover the Acting Roots You Never Knew You Had,” which will begin March 8. The instructor is Albert Verdesca, who has had a long career in theater, as actor, director, and playwright. He’s a veteran of the NY Shakespeare Festival Public heater, Off-Broadway productions, and even street theater. Mr. Verdesca will treat the members of Club Sequoia to fun acting exercises, and teach students how to develop and star in their own short plays.

There will be four other programs; those are still in the early planning stage.

These days, as covid seems to be on the wane, Club Sequoia programs are both virtual and in person.

Gerry Kelly has lots of good things to say about Club Sequoia and JFS Clifton Passaic. Finding the agency, has been “the best move I made.” He’s happy that its doors are open again, and he’s looking forward to more programs. “The presenters have been great,” he said. He liked being a film critic. He enjoyed the films that Ms. Psaki screened; “It was nice to visit Mel, Woody, and Spielberg again,” he said.

Zoom remains an option that participants who don’t feel safe venturing out to in-person programs. Catherine Mellilo of Bloomfield still is participating in Club Sequoia’s programs online. “I’m enjoying the film critique sessions,” she said. “I had a good laugh remembering the deficiencies I saw in ‘It’s A Wonderful Life.’” She didn’t particularly like “The Sound of Music” either. But, she added, “I had a wonderful time sharing thoughts that came to me about Mel Brooks.”

Ms. Melillo mentioned other programs at JFS Clifton Passaic as well. “I always try to catch the talks on philosophy, Torah, and so forth,” she said. “They fascinate me, and they tend to present important concepts in a very-down-to earth manner. It’s especially delightful if straight-shooting Miriam, who is a Holocaust survivor, disagrees, and says so!”

Will there be more arts programming made available at Club Sequoia? Alexander “Ozer” Herzog, is JFS’s new CEO. “We are finding scores of retirees who want to participate in culturally specific and age appropriate programming,” he said.

That sounds like a yes, and will please the many people who love Club Sequoia. Speaking not just of Club Sequoia but JFS Clifton Passaic as a whole, and using his newly honed skills as a critic, “I give them an A plus all the way around,” Mr. Kelly said.